Gross Vintage Holiday Recipes That Are Sure to Impress

Jen Arbues
Gross Vintage Holiday Recipes That Are Sure to Impress December 12, 2018 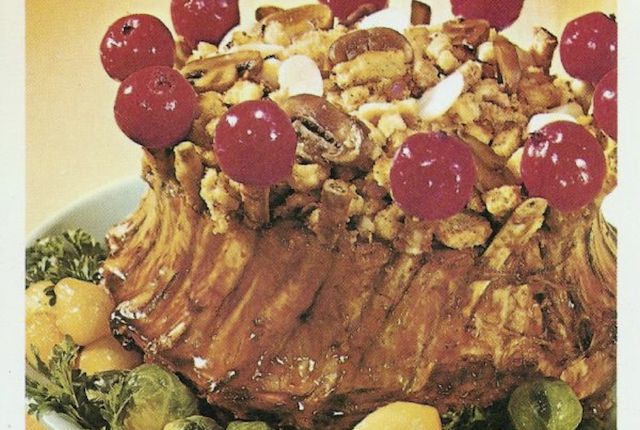 It's the most wonderful time of the year. Because the holiday season is about spending time with old friends and family. And sitting in front of a TV in your pajamas for entire days at a time. And exchanging white elephant gifts. But, most importantly, it’s about eating. Because food is and always has been a big thing. These gross vintage holiday recipes will prove that.

Every good vintage baker out there knows gelatin, especially during the holiday season. How else should one encapsulate a delicious mixture of celery, apples and nuts, but with strawberry Jell-O and a modest topping of Miracle Whip and mini marshmallows?

Nothing says Christmas quite like the baked combination of olives and ketchup. This festive cake benefits from additional layers of cold cuts and cream cheese, which — let’s be real here — is the one thing your holiday guests are really looking for, anyways.

“So simple… So quick.” If that isn’t enough to sell you on having this evaporated milk and Jell-O monstrosity at your holiday dessert table, then maybe the idea that, “It’s good for them, and you’ll have plenty,” will.

We aren’t entirely sure what deviled ham is, but we’re willing to go out on a limb and guess that there isn’t much about it that could be considered pleasurable. But maybe they’re referring to that “festive Snow Cap Spread” instead.

When you’re preparing a big holiday dinner, putting together a light, pre-dinner salad is a must. This Weight Watchers Frozen Cheese Salad is perfect — there’s broccoli, and broccoli equals health. Plus, you know it’ll keep in line with your food points system.

On its surface, this Jell-O loaf looks like just another average holiday gelatin mold. But take a look at the actual ingredients: ham, celery, onion — all good choices. Lime Jell-O? We’re going to need to take a pass on that.

Much like gelatin, olives (particularly of the Spanish green variety) were a big hit in vintage holiday kitchens. They are quite the versatile ingredient, you know. Not only do they make great cake toppers, but they work well as cheese sculpture toppers, too.

For the lazy host or hostess, this holiday meat tree will have your guests raving about how fancy you are, with little to no effort involved. Just throw some toothpicks into a loaf of bread and fold some cold cuts onto them. “For color, fill in the spaces with radishes and olives.”

It seems like every holiday season, someone thinks it’s a good idea to make a gingerbread house. It inevitably ends with terrible frosted decor, and it gets stale and gross before you’re ever allowed to eat it. This cheeseball stuffed meat house, on the other hand? Serve with crackers or chips and enjoy immediately.

This fancy holiday dessert is made with dexo, an all-vegetable shortening from the good ol’ days. There’s almost a cup of it in here, along with enough sugar to keep your youngest party guests in top annoying form for hours on end.

It’s not that this vintage cake recipe calls for any specifically terrifying ingredients. It’s that the snowman you’re supposed to create is named Roly Poly, and he 100% looks like he will murder you in your sleep.

Also known as a “Crayfish Bush,” this gem from 1962’s Art of French Cooking really says “Christmas,” what with its red and green color scheme and odd, tree-like shape. That green is parsley, by the way, so you’d better be a fan of garnish overload.

Of all the holiday type meats out there, ham is probably in the top three of them. And since vintage holidays call for copious amounts of gelatin, why not combine the two into a single, glorious dish that gets its winter wonderland color from a generous helping of mayonnaise.

Like its “Pleasure Island” counterpart, this sandwich tree’s main ingredient is deviled ham. But it has about a thousand other ingredients, too, including grated cheese, chopped olives, “soured” cream, sweet pickle relish, minced onion, and chopped apple.

This is it. The centerpiece you’ve been waiting for. Every Oscar Mayer cured meat you can think of, along with parsley and huckleberry leaves, pinned to a tree made of a kitchen funnel and styrofoam. Safety first.

Of course, if B-O-L-O-G-N-A isn’t really your holiday thing, you can always make the same sort of centerpiece using shrimp and Spanish stuffed olives instead. Do it for the pescatarians in your life.

According to this vintage ad, “You eat the dish and all.” Seems no one realized that the hollowed-out bread dish this sliced salmon “salad” sits in is also on an actual dish. Which we wouldn’t recommend eating, unless it would pair well with Wrigley’s gum, that is.

There’s a tendency to overdo it on the food during the holidays, which is why it’s so important to get your daily serving of veg in. This recipe not only has an entire loaf devoted to vegetables, but it’s surrounded by vegetable-like treats.

Apparently, snowman-shaped holiday foods were big back in the day. Frosty the Slawman has four main ingredients: gelatin (obviously), mayonnaise (why not), cottage cheese, and grated cabbage. The appeal is in the bell pepper hat, clearly.

We’re all familiar with fruitcake. It’s a cake of sorts, made with dried fruits and nuts typically, and it seems to last for years, on account of its regifting ability. This one, however, has mincemeat added to it, which is a mixture of beef and fruit and sadness.

What do you suppose this Deviled Ham Yule Log is frosted with? Mayonnaise? Actual frosting? Maybe it’s a Baked Alaska sort of situation, with meringue on top. Whatever it is, it’s probably delicious on a Frito or two.

The hot dog really is the unsung hero of vintage cooking. It’s so versatile — chop it up and add it to whatever kind of mayo salad you’ve got going on. Slice it and arrange it on the outside of a pie like an edible fence. The hot dog is (and has always been) here for you.

“The perfect dish for a special occasion luncheon,” Cold Ham Mousse is a delightful blend of ground, cooked ham, chicken broth, and whipped cream. It’s mixed with cream cheese and mayonnaise, because the Cold War era was marked by dairy/cured meat combos.

Pretty much at this point, we should assume that a vintage “Yule Log” is any log-shaped semi-edible item made with copious amounts of some gelatinous spread. This one also utilizes canned fruit and a freezer, because fancy.

Nothing quite says “Christmas” like vermicelli, sour cream, raisins, and cheese topped with cranberry sauce. It’s the cranberry that really makes it — this is essentially the predecessor to that canned mold on every ‘90s kid’s Christmas table.