Love Chicken Nuggets? You May Change Your Mind After You See How They’re Made

Camila Villafane
Love Chicken Nuggets? You May Change Your Mind After You See How They’re Made February 19, 2019 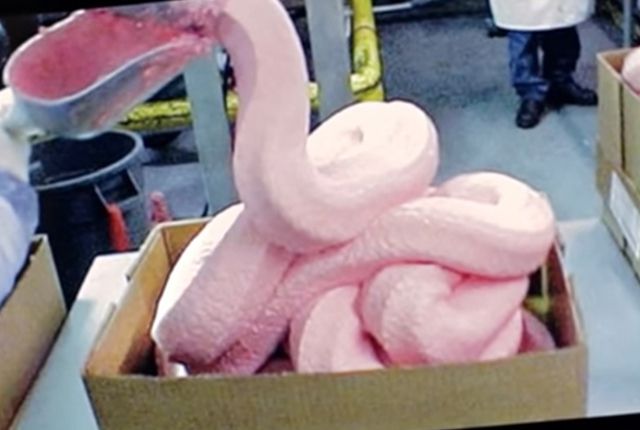 We assume you've tried chicken nuggets from various fast food joints. Unless you’ve been on a strict no-carb, zero-calorie diet since childhood. And some of you are lifelong fans of this delicious fast-food menu item. But would you still order them if you knew how they actually make chicken nuggets ?

The Company Behind the Nuggets

Tyson Foods, Inc., an Obion County facility in Tennessee, is just one of five facilities responsible for making Chicken McNuggets in the United States for McDonald’s restaurants. But do you know how your favorite nuggets are made? And, most importantly, are you willing to find out? You might regret it if you're a big nuggets fan. Fair warning.

The initial reaction is that there are tons of people inside one of these giant factories, along with bins full of chicken that get put into a grinder and poured into a bowl, which then gets molded into the shape of a nugget. But nothing could be further from the truth.

The Truth Is Out There

The internet lies like a dog. If you run a search for "chicken nuggets," you might wind up with a photo of ground chicken meat that looks more like a python in a tray rather than something edible. Wait until you see what it looks like. It's seriously something you've probably never seen in your life. So what is in the nuggets mix?

This concoction is called "ammonia-treated lean beef trimmings," aka "pink slime." It comes from an industrial process by which meat parts stuck to bones are recovered with a little help from machines. And the resulting pink slime is just perfect for plumping chicken products right up.

The industry also uses this plumping method to beef up those delicious burgers you like. But it would likely turn everyone into vegetarians if they knew the truth. But did fast food joints really use this pink slime to fluff up their nuggets?

According to NBC News, McDonald’s stopped using lean beef trimmings after 2011. So, nuggets should come from white boneless meat instead of a thick batter coiling. The process is a lot more detailed than most consumers assume.

These workers cut the chicken with the precision of a butcher. Once they’re done, the pieces of dark meat, drumsticks, and thighs (which don’t go on the nuggets) are placed on a table. So what parts are used in your nuggets?

Breast meat, rib meat and tenderloin do go into chicken nuggets. But before that happens, the skin needs to be removed. Unfortunately, it doesn’t go away completely. In order to get that nice juicy flavor we all love, the factory workers add some of the skin back.

No Feet, No Beaks

Most people tend to worry about what really goes into nuggets meat. We’ve heard all kinds of crazy things like how they grind chicken feet and beaks into the meat, which is admittedly very gross, but Tyson Foods denies using any of that.

Only the Best Chicken Meat

Employees will head to the grinding operation where 100 percent ground white meat chicken is deposited into conveyor belts through a series of hoses. And you’d have to be blind not to see why your nuggets always taste meaty.

To give you that meaty texture, the grind is coarser in the facility than what you’d find in a supermarket  Grinding is certainly a major step. But there are a lot more steps to go through than you might have imagined. ..

Another machine is used to combine all of the ingredients used in the making of chicken nuggets. Essentially, you have chicken meat, chicken skin and the marinade ingredients. But if you thought Ronald McDonald was holding out on you, guess again.

Most restaurants would never give out their secret recipe. Otherwise, what would be the point of calling it a secret? But McDonald’s doesn’t care. To prove that, they posted the full list of Chicken McNuggets ingredients on their website.

Water, sodium phosphates and modified food starch sound like ingredients in a science experiment, but they add moisture to the chicken mix. But wait, wait, wait! Where are you going? We’re not done yet. There’s so much more...

Sprinkle some salt, some natural flavoring (we assume the chicken skin), some wheat starch, dextrose, citric acid, and autolyzed yeast extract to put the yum in your nuggets. Rosemary extract and safflower oil preserve freshness, so you really don’t have to worry about ever ordering a batch of stale old nuggets at the drive-thru window.

The end result is more like a tray of ground chicken. You know, like the kind you’d find at your local supermarket. But better. Now it’s just a matter of shaping the meat to look like -- you guessed it -- nuggets.

Every night, recently formed nuggets are placed in rows on top of a metal conveyor and run through a thin layer of batter followed by a thin layer of breader, which also contains flavorful components like celery and white pepper.

Don't Fry Without It

The final step is the tempura coating, which is a thicker batter that makes chicken nuggets properly crunchy. The coating consists of wheat flour, corn flour, starches and leavening agents.

The leavening agents aerate the batter, which ultimately makes the nuggets so unique and popular. Now all they need is to fall into the fryer, but they never finish the cooking.

No, They're Not Raw

The plant only partially cooks their nuggets in order to set the tempura batter and get the awesome texture we all know and love. Once they’re safely distributed to fast-food restaurants, they’ll finish cooking on-site.

The nuggets are flash-frozen to lock in the flavor and the juiciness. This process also prevents the formation of ice crystals on the product. Afterwards, they’ll get bagged, boxed, and sent on their way to the restaurants.

Every hour, workers in the sensory kitchen will evaluate nuggets off the line. Translation: They get to eat nuggets all the time. Sounds like a dream job. But there’s more to it than that.

The factory wants to make sure the nuggets look golden brown and that they have ridges and peaks. They also have to have a firm texture while still tasting juicy. Then it’s all about evaluating the taste.

The person at the sensory kitchen double checks to see if the chicken nuggets actually taste like chicken. But they want their customers to pick up on hint traces of pepper and celery too. And here you thought nuggets were nothing but pink slime.

We get why you quit quit eating chicken nuggets. No one wants to eat chicken beaks, feet or who knows what else. But the nuggets' creation is painstaking, and there’s no mystery meat of any kind. So enjoy every juicy bite guiltlessly. That is, if you're not on a diet. Because they're still hella bad for you.