30 Regional Delicacies the Rest of the World Thinks Are Insane

Camila Villafane
30 Regional Delicacies the Rest of the World Thinks Are Insane June 4, 2019Leave a comment 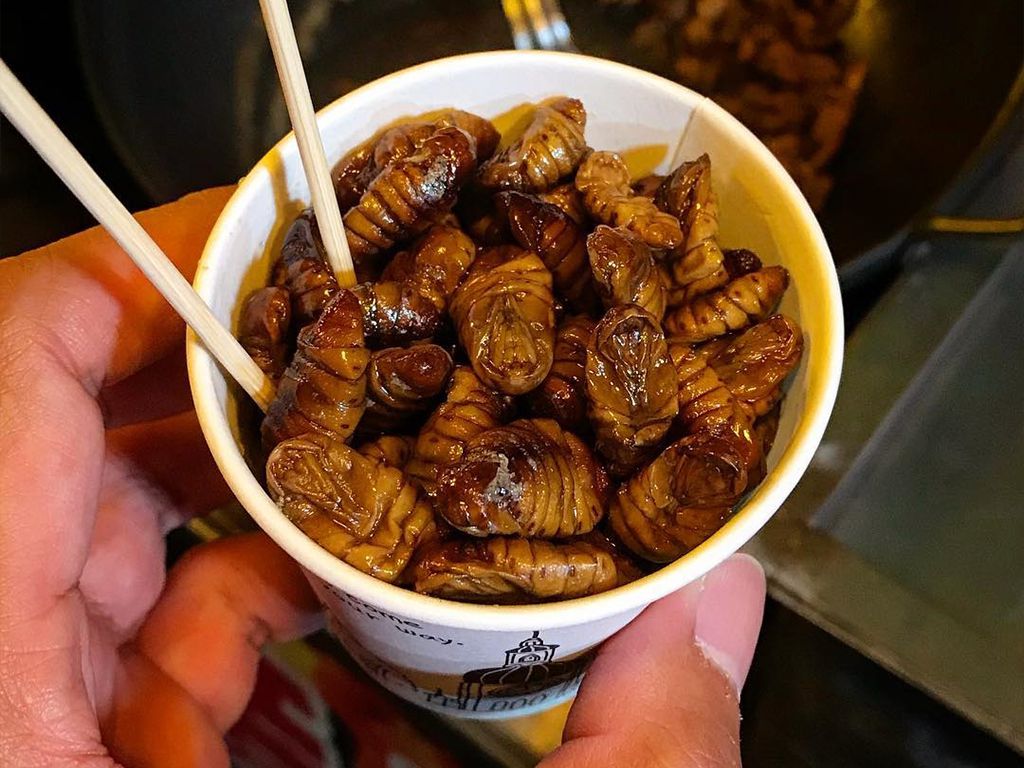 There are a lot of dishes around the world that offer exotic and unique flavors. But some might find are just way too weird and off-putting. Check out these international delicacies that will make you think twice before taking a bite...

How would you feel about eating a sheep’s lungs, liver and heart? Don’t worry. Haggis is seasoned with salt and spices that add a bunch of flavors. They’re even mixed with oatmeal and onions. But can you stomach the fact that Haggis get cooked inside the sheep’s stomach and is stuffed with sheep's pluck (lungs, liver and heart)?

If you think this is chicken soup served in a bowl made of leaves and twigs, guess again. This bird's nest is made up mostly out of Swift birds’ saliva. Your stomach might be turning, but in China it’s considered the caviar of the East.

Locals call it gaeng kai mot daeng. This delicacy is basically a mix of eggs and partial embryos from the white ant. In some cases, baby ants help add a touch of sourness to the soup. If you can look past the main ingredients, you’ll find that it tastes surprisingly like shrimp.

You can order escargot pretty much anywhere in Paris. It’s a prestigious dish synonymous with France. But we doubt you’ll feel like much of a Parisian after you realize that escargot is actually nothing more than snails. To make it worse, they’re sometimes served with their shells intact.

You don’t have to go abroad to eat something nauseating. You just have to travel north to Alaska where locals bury the head of a king salmon for a couple of weeks. Then the foul-smelling fermented head gets served and eaten like a mush.

These are not the run-of-the-mill, itsy-bitsy spiders you find at home. They’re huge tarantulas that people buy from local street vendors and then fry. Clearly, arachnophobia isn’t much of an issue in Cambodia.

Canadians prepare this interesting dish by boiling the moose nose with onions and spices. Then they remove the hair and boil it again before slicing it up. After that, they cover it in a broth that turns into a jelly. Better hope it tastes better than it sounds.

You or a friend probably had a pet guinea pig during your childhood. But would you consider eating one for lunch? Well, in Peru, the dish is known as cuy, and what you get is a roasted guinea pig on top of a mountain of potatoes. Dig in.

South Koreans have an interesting take on what constitutes a delicious snack. Instead of chips, they boil or steam beondegi, aka silkworms. Once they’re seasoned and cooked, they’re served on a skewer. And in case you were wondering what they taste like, well, some travelers claim they taste like wood.

If someone serves you khash, don’t look away at the grinning skull staring back at you. This dish contains cow’s head and feet and is considered a delicacy in the Middle East. Who knows? It might just taste like grandma's soup.

Pufferfish are delicacies in Japan, but most people are baffled by this because the fish contain tetrodotoxin, a poison that’s over 1,000 times stronger than cyanide. If the dish isn't prepared exactly right by a specially trained chef, it can kill the diner. So steer clear of this unless you want to wind up six feet under.

It’s not very popular on modern menus, but if an elderly person in Korea invites you to sample some bosintang, you’re in for a feast full of dandelions, spices, scallions and — wait for it — dog meat.

Vietnamese claim eating cobra heart gives those who consume it extra vitality. But is vitality really that important to you? To prepare this dish, the chef beheads the snake, then rips out its heart. The heart goes immediately into a shot of vodka that you, the diner, are supposed to drink while the heart is still beating. Yes, you read that correctly. Still. Beating. Heart.

Indigenous Australians discovered that kangaroos are low in fat and high in protein. So you can literally have a nutritious and healthy burger, sausage or steak. You just have to get past knowing it's kangaroo meat.

If you think that eating an eyeball sounds nasty to everyone, think again. People who have tried this delicacy claim it has a similar texture and taste to octopus or squid. So if you like either of those things then you can certainly stomach tuna eyeballs.

Who says you can’t have your egg and eat your chicken too? In the Philippines, you can order some balut, which are fertilized chicken eggs. They’re boiled right before they hatch. But fair warning: The older eggs are more likely to contain a beak, claws and feathers. Yum.

Huitlacoche translates to "sleeping excrement." If that alone doesn’t turn your stomach, let us describe what this food actually is. A fungal plant disease called corn smut turns corn kernels into black-and-blue, spore-covered, tumor-like galls. And that edible fungus is huitlacoche.

Percebes are considered a seafood delicacy in Portugal and Spain. They’re also known as goose barnacles and are crustaceans living and growing on rocks and ships in the Atlantic. But why would anyone want to eat something they scraped off a boat?

This delicacy is a white, wood-eating larva that comes from moths. It’s said to taste similar to almonds. You can eat it raw or cook it lightly so the skin crisps while the inside keeps a consistency similar to scrambled eggs. Who's hungry for breakfast?

Locals bury the carcass of a basking shark in a pit and press it with stones to drain the poisonous body fluids trapped inside. The meat is left to ferment over several months. Then the meat is hung to dry, cut into strips and served. But brace yourself, because guess what. It turns out fermented shark meat has a really strong fishy flavor.

You’ll find casu marzu, aka maggot cheese, on the black market in Sardinia. The cheese fly’s larvae get introduced into the sheep’s milk cheese. The fermentation process starts when the larvae eat the cheese fats, softening the texture. But you have to eat the cheese while the maggots are still alive or the cheese could turn toxic.

Next time you’re in Mongolia, order yourself some airag. That's fermented horse milk, in case you didn't already know. Airag is fizzy, sour and somewhat alcoholic. It’s served cold in a bowl-shaped cup. Also, the dregs gets poured back into the container. It's important to not be wasteful.

Visit the Beijing night market and you’ll find all sorts of weird delicacies to eat. Like big black scorpions on a stick. They’re dry and crispy, just like all the best snacks. In fact, eating them is almost like eating hard chips. And they’re considered a delicious treat in Beijing.

Want some crackers to dip in your tea? If you’re in Japan, why not try their delicious wasp crackers? They're exactly what they sound like: dead wasps baked into crackers. And served with coffee or tea. But don’t worry, because their stingers are no longer a threat. Is that what was stopping you?

Surstromming is Baltic Sea herring fermented with lots of salt to keep it from rotting. It also gets tinned and brined for several days so that the pungent smell comes out when you open the can. Just don’t eat this indoors.

Sannakji is a Korean delicacy where live octopus get cut into pieces, seasoned with sesame oil, and served. But you have to have a tough stomach to slither down the still-squirming tentacles. Also, a warning: You could choke if the suction cups on the tentacles get stuck to your throat.

Muktuk is an Inuit dish that you can eat either pickled or raw. What is it? Basically, it's frozen, multi-layered whale skin that supposedly tastes like hazelnuts and fat with chewy blubber in between. Lovely.

Care for some chicken buttholes? No, that's not just a funny nickname. That’s exactly what they are: the anuses of chickens. It's fine; they just taste like grilled meat. So dig in. And if you happen to bite into something crunchy, don't worry; it probably isn’t part of the chicken butthole, but a byproduct. Phew.

If you’re in Indonesia and someone offers you some coffee, you might want to say no. Kopi luwak may be a rare and expensive type of gourmet coffee, but it’s also made from the excrement of civets, cat-like creatures found in Indonesia. The civets eat coffee cherries and poop out the seeds, which are only then harvested to turn into coffee beans.

Century eggs, aka hundred-year eggs and thousand-year eggs, are eggs preserved with quicklime, rice hulls, salt, ash and clay for several months (not really 100 years). Once served, the yolk looks green or black, and rotten, and the white part becomes a brown, transparent jelly. While the Chinese consider it a delicacy, the color, smell and texture are not for everyone.