You’ve Been Eating Sushi Wrong For Your Entire Life 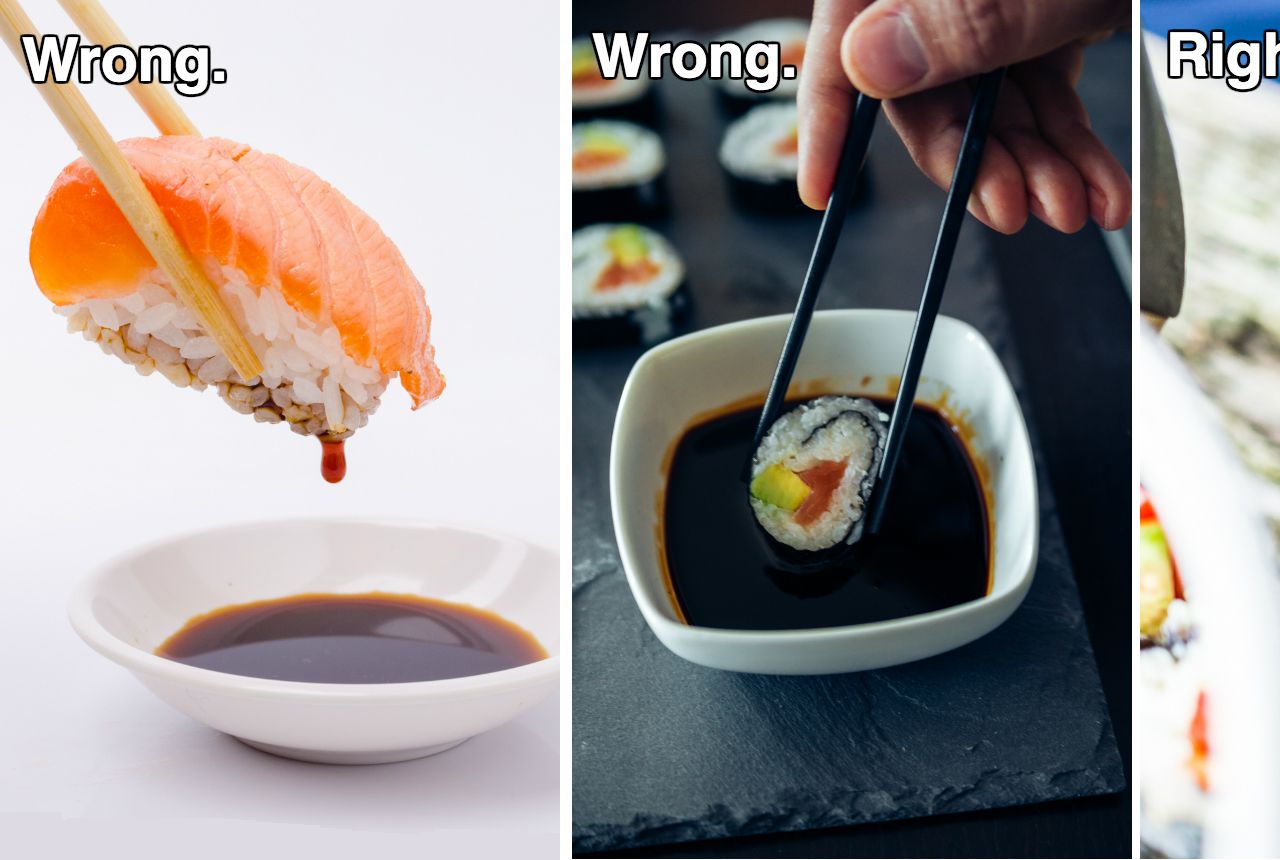 Codes of etiquette are essential to Japanese culture, so it should come as no surprise that eating a sushi meal is rife with expectations and rules. And guess what: You've been breaking most of them for years. Here's how to eat sushi the right way, you clod.

The question implies that they’re serving anything that isn’t fresh. It’s insulting.

DON’T rub your chopsticks together.

People do this because they think there’ll be splinters in their chopsticks. There won’t be, and the idea there might be implies the restaurant has given you cheap implements. It’s insulting.

DON’T gesture or point with your chopsticks.

The sushi chef already puts the amount of wasabi he believes is right. It’s OK to add a little more if you like some extra kick, but put it directly on the piece of fish. Don’t make a gross slurry of soy sauce and wasabi in your soy sauce dish.

Again, your sushi chef has seasoned your food already. You’re expected to use soy sauce to taste, but don’t drown your sushi in the stuff. A little goes a long way.

It’s very common for people to dip their nigiri rice-first into the soy sauce dish. It’s also very wrong. You should turn the nigiri so the fish is to your left and the rice is on your right (told you the rules were specific). Then dip a corner of the fish into the soy sauce.

DON’T forget to flip your nigiri upside-down when you eat it.

Nigiri goes rice-side down when it’s served to you, but your tongue is meant to taste the fish first.

DON’T use chopsticks to eat a sushi roll or nigiri.

Each piece of sushi is a work of art, and you’re meant to experience its texture and temperature. Using chopsticks isn’t rude, but neither is using your fingies. Don’t be afraid to be tactile.

DON’T use your fingers to eat sashimi.

Unlike nigiri, sashimi must be eaten with chopsticks.

DON’T eat pickled ginger in the same bite as your sushi.

The ginger is there as a palate cleanser between bites. It’s not there to complement the sushi itself. So don’t put the ginger on your sushi. Gross.

Each piece of sushi and nigiri is meant to be eaten in one bite. Otherwise, it’ll crumble apart and make an insulting mess.

DON’T eat your sushi out of order.

Eat the lighter-colored, lighter-tasting fish first, then work your way through the darker, fattier pieces.

DON’T use the business end of your chopsticks to share.

That’s the part that goes in your mouth, chochacho. Use the blunt end of your sticks if you want to pass something to someone else. Don’t be nasty.

DON’T wash your meal down with soda.

Come on, ugly Americans. You can do without cola for one dinner. Drink something traditional with your sushi, like green tea, sake or even beer.

Good food takes time to prepare, sushi especially so. If you want your food served up in minutes, go back to Applebee’s and order some frozen garbage heated for you in a microwave.

Take in the beauty of your sushi, savor the taste, but don’t dilly-dally. Leaving pieces of sushi to sit for several minutes lets the temperature and flavor deteriorate.

DON’T focus entirely on the fish.

Sushi includes many ingredients, not just fish. In fact, any sushi chef will tell you rice is the main event. Sushi rice is prepared specifically and carefully. Learn to appreciate the rice, and every element of the meal.

DON’T be scared to ask questions.

By all means, build a rapport with your sushi chef at the bar. They will appreciate your genuine interest in the food. That said, gauge how busy your chef is, and don’t monopolize their time.

DON’T leave food on your plate.

It’s considered impolite not to eat everything you’re served, so don't leave anything behind, not even a single grain of rice. Unless you want to be rude.

DON’T ask for a doggy bag.

Because of its specific construction, flavors, temperatures and textures, sushi isn’t meant to be saved for later. Eat what’s served in the restaurant and don’t count on leftovers.