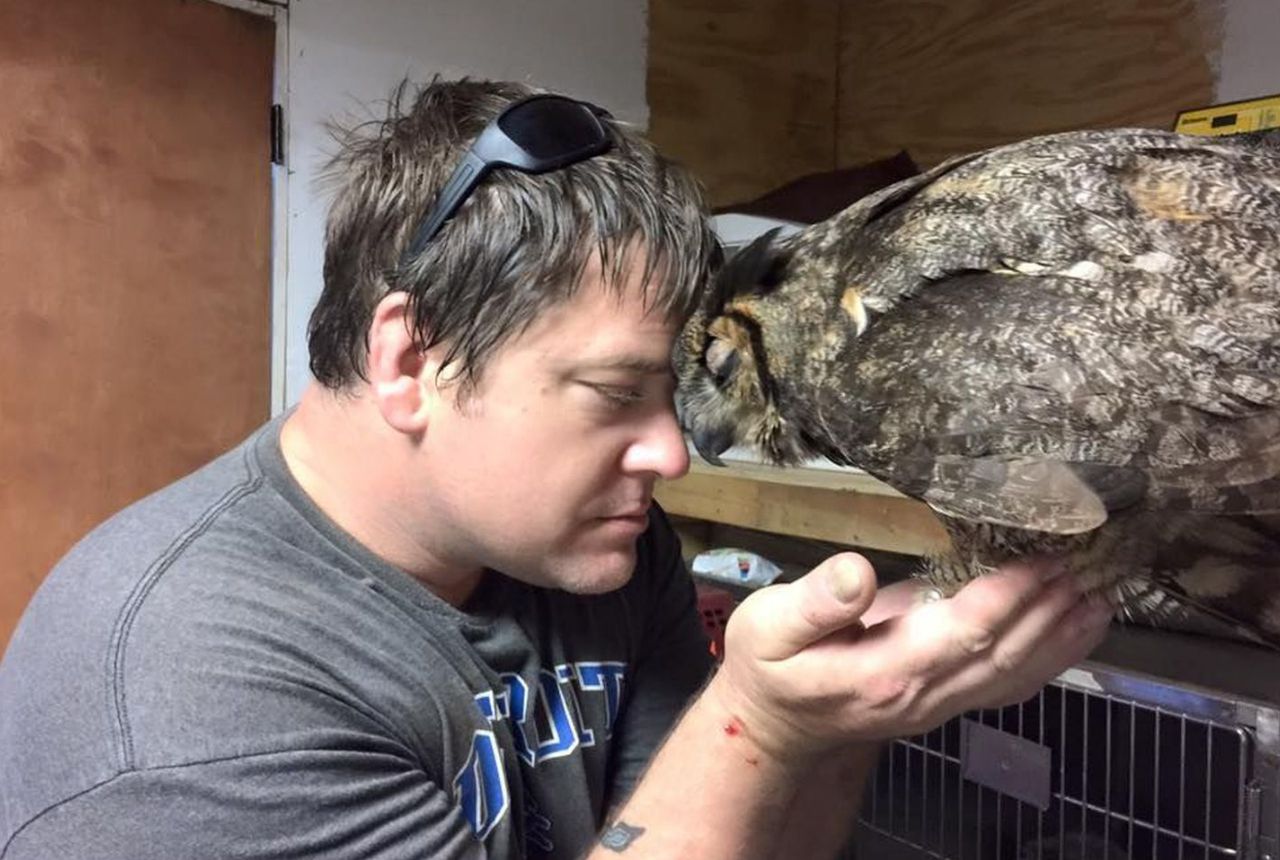 Life can be tough for a rescue owl. These proud birds are often very aloof and distant, and the stress of being cooped up and forced to spent time with humans can feel humiliating. One poor owl, though, formed an unexpectedly strong bond with her rescuer. Gigi the great horned owl got treatment at the Wild at Heart rescue center in Mississippi. When the man who’d initially provided her care left for a few days, she grew forlorn and upset. Upon his return, though, nobody could have anticipated just how affectionate Gigi would be. It stunned even professional owl experts when they saw this rescue owl’s response to seeing a familiar face again…

The Wild at Heart animal rescue center in Mississippi is a phenomenal place. Every day, the center deals with all kinds of animals that, for whatever reason, end up in need of care. Some of their visitors are very special.

There’s no animal that Wild at Heart won’t treat if they’re in need. Some are more exotic than others, but no matter what, these hard working rescue experts put in the time and care necessary to get these down-on-their-luck animals back to full health.

The Bird of Prey Whisperer

One man at the animal rescue center has a particular affinity for birds. While Douglas “Doug” Pojeky treats all kinds of animals, he’s earned the nickname “the bird of prey whisperer” for his ability to treat and care for many winged creatures that would rather be left alone.

Life at the center is never easy. Every differnt type of animal needs specialized care, and not every creature manages to pull through. Nevertheless, Doug takes pride in doing his best to help these nobles animals.

No matter how big or small, every creature has a right to being treated and taken care of. And since Dough takes his job very seriously, many miracles happened thanks to him over the course of years. But there’s one bird he will never forget.

One animal that Doug will never forget was a beautiful horned owl named Gigi who came into his life a few years ago. While most owls are standoffish and aloof, Gigi and Doug formed a special bond that bore some very special fruit.

Gigi never looked particularly comfortable in her cage. The poor bird had been admitted to the center following a severe concussion that left her acting strangely. Her body was also riddled with parasites, and it was clear that she wasn’t in a good shape.

In response to her injuries, Doug did his best to make her comfortable, wrapping her up to keep her safe. At first, she was less than thrilled at this treatment, but she soon warmed up to him.

Soon Gigi realized that Doug’s powerful arms were providing help. He was able to help her heal from a lot of her parasites, and provided medicine and care to get her back into good health.

Doug even managed to convince Gigi to let him feed her by hand, which was no small task. The bird tried her best at eating unaided, but it quickly became clear that her concussion was so severe that she needed a little extra help.

All of this feeding was very necessary. Gigi had developed pnuemonia before being picked up, and as they worked to help her recover, she lost a full pound of body weight – which is a big deal, as her species normally only weighs between two and five pounds.

Fighting For Her Life

According to Wild at Heart’s founder, Missy Dubuisson: “This bird was one of the most critical we have ever taken care of. The fact that this bird has lived is beyond comprehension.”

It’s no exaggeration to say that Doug saved Gigi’s life. Before long, she was feeding herself, and putting weight back on, all thanks to the work of this heroic animal rescuer.

But Doug couldn’t stick around forever. Once Gigi was feeling better, he took some time off to visit family. Gigi continued to get better, but it was clear that she missed her friends.

The other staff at the rescue center did their best to look after Gigi, and as she was past the worst part of her recovery, this wasn’t too big of a deal. But soon, she’d be reunited with her favorite human friend.

When Doug returned to greet Gigi after their time apart, he didn’t really know what to expect. Would the owl recognize him at all? Or was he simply another human face, completely interchangeable with her other carers?

A Warm Welcome Back

It turns out that Gigi definitely recognized Doug. To everyone’s surprise, she leant her head on his shoulder, and fanned out her wings in a loving embrace!

Owl experts have never seen this kind of behavior before, as the birds are typically not affectionate. While owls shelter their young when they’re small, this is very different behavior. Some suspect that Gigi is acting strangely following her concussion, but one thind is certain: she was definitely very happy to see Doug again.

While Gigi has now been returned to the wild, Doug continues to work at the rescue center, treating all kinds of animals. But he says that owls, particularly Gigi, are very special to him.

Human relationships with birds can be very powerful. It’s clear that Gigi and Doug had a very special connection, and that this helped her to recover from injuries that would otherwise be fatal.