Zarouhi Mikaelian
10 Reasons The 2018 NCAA Tournament Had The Most Fun First 2 Rounds In Forever March 20, 2018 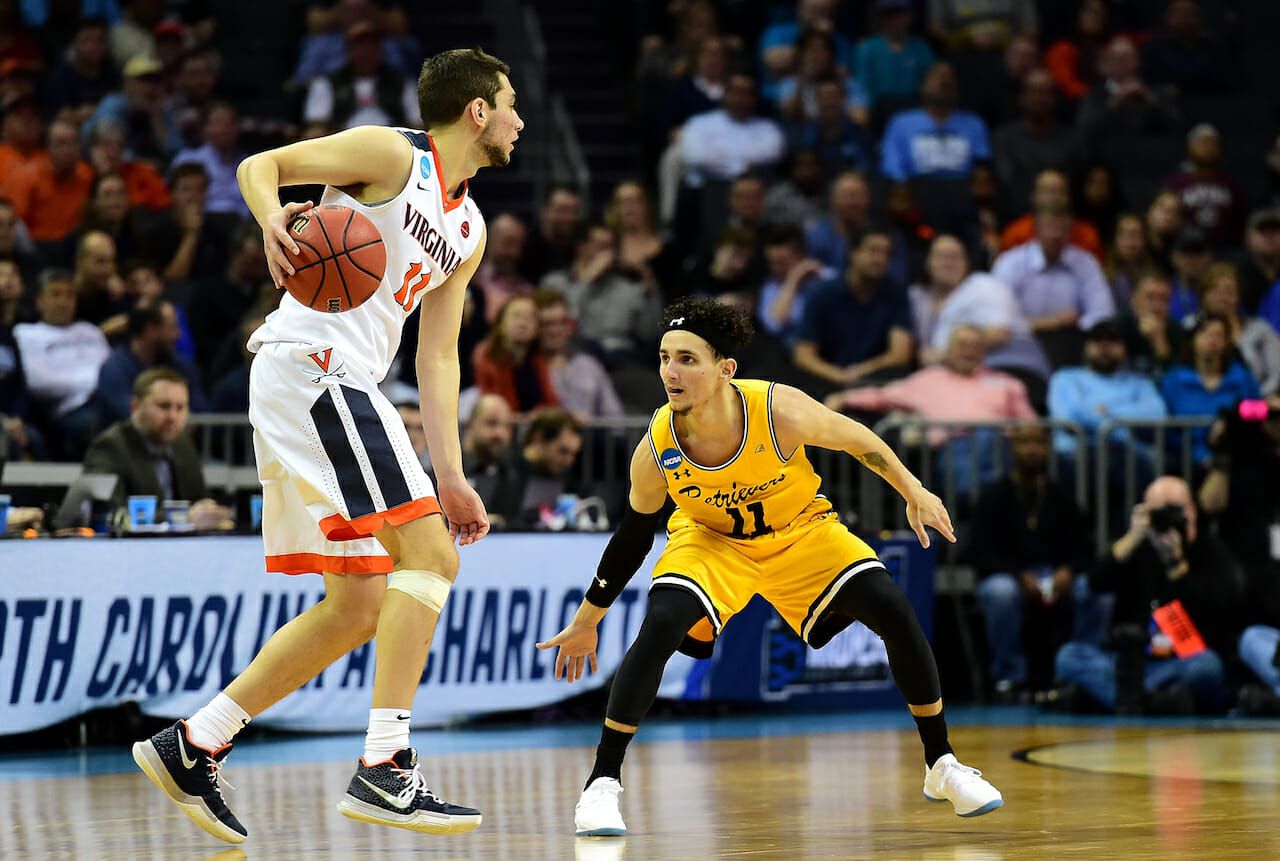 Though it might have had you busy burning all evidence of your 2018 NCAA tournament bracket and dancing in the ashes while whispering the names of every member of the UMBC Retrievers roster, it's hard to deny a severe case of exhilarating March Madness has struck hoops fans and lovers of teams named after very good dogs alike. Here's 10 reasons the 2018 NCAA tournament had the best opening week we can remember.

Let's get the most obvious one out of the way first. On the 136th try, the Retrievers of University of Maryland, Baltimore County became the first No. 16 seed to topple a No. 1 seed, the Virginia Cavaliers. The squad then stayed within a possession of No. 9 Kansas State for most of their second-round matchup, falling just shy of the Sweet 16, but not before gifting the masses with free pizza.

[dx_custom_adunit desktop_id="RTK_K67O" mobile_id="RTK_5yk0"] The No. 11 Loyola-Chicago Ramblers reached the Sweet 16 on the strength of a pair of game-winners with 0.3 seconds and 3.6 seconds left. No. 3 Michigan advanced past No. 6 Houston with a truly insane Jordan Poole buzzer-beater. Houston got to that second-round matchup with the Wolverines thanks to a bonkers game-winning layup by Rob Gray with 1.1 seconds remaining against No. 11 San Diego State. And the Nevada Wolf Pack's historic comeback against No. 2 Cincinnati (more on that later) came courtesy of a Josh Hall putback with 9.1 seconds remaining.

The 98-year-old nun serves as chaplain of the biggest Cinderella story remaining in the tourney: the No. 11 Loyola-Chicago Ramblers. The job involves everything from praying for wins to giving out hugs to doling out scouting reports. "Don't let those Tennessee team members scare you with their height," she told the Ramblers before their upset of the No. 3 Volunteers. "Height doesn't mean that much. You're good jumpers. You're good rebounders. You're good at everything. And just keep that in mind."

4. This Moment Between Moritz Wagner And Corey Davis Jr.

After Jordan Poole's thrilling game-winner sent the No. 3 Wolverines to the Sweet 16 and the No. 6 Houston Cougars packing, Michigan big man interrupted his celebration to console Davis. "Seeing the guys like that, at the end of the day, sports is all love," Wagner said later. "I have feelings for both sides. It’s very emotional and this group is special. … At the end of the day, you’re only human. Seeing people like this, it’s a weird feeling. For an emotional guy like me, I knew if (Poole) doesn’t make that shot it’s us laying on the floor. You got to appreciate both sides."

[dx_custom_adunit desktop_id="RTK_K67O" mobile_id="RTK_5yk0"] Though his No. 6 Cougars have been eliminated, Gray leads all March Madness scorers with 62 total points. His 39-point showing in Houston's Round 1 victory over the No. 11 San Diego Aztecs, in which Gray hit the game-winner with 1.1 seconds remaining, might hold up as the performance of the tourney when all's said and done.

6. Arguably The Greatest March Madness Comeback Of All Time

No. 7 Nevada's 22-point comeback to upset No. 2 Cincinnati is tied for the second-biggest comeback in NCAA tournament history. But the biggest, a 25-pointer in BYU's 2012 win over Iona, came in a First Four matchup, and the other 22-point comeback, Duke's over Maryland in the 2001 Final Four, was accomplished with the benefit of more than an entire half of play. The Wolf Pack's took just 11 minutes.

7. The Unprecedented Demise Of The South Region's Top Seeds

For the first time in the history of the NCAA tournament, a region will enter the Sweet 16 without a single one of its top four seeds. In the South region, No. 5 Kentucky and No. 9 Kansas State will play for the right to go up against the winner of No. 11 Loyola-Chicago and No. 7 Nevada.

8. The Top Prospects Got Exposed

[dx_custom_adunit desktop_id="RTK_K67O" mobile_id="RTK_5yk0"] Probably the four most highly touted NBA draft prospects heading into the tournament — Deandre Ayton of No. 4 Arizona, Trae Young of No. 10 Oklahoma, and Jalen Jackson Jr. and Miles Bridges of No. 3 Michigan State — all bid farewell in the tourney's opening two rounds. And they looked pretty bad doing it: Big man Ayton was helpless defensively against the small frontline of No. 13 Buffalo; Young got embarrassed twice on the defensive end in the last two minutes of his overtime loss to the No. 10 Rhode Island Rams; and Jackson and Bridges combined for 13 points on 4-of-22 shooting against No. 11 Syracuse's zone defense.

It's a double whammy of disappointment for No. 4 Arizona's Deandre Ayton, whose inability to do anything to stop No. 13 Buffalo in the opening round spelled the end for the Pac-12 in March Madness. It's the first time since the formation of the Big 12 in 1996 that one of the six major conferences failed to send a team to the second round of the tourney.

The No. 16 UMBC Retrievers gave them a run for their money, but the No. 7 Rams had the liveliest bench reactions of the opening two rounds, treating viewers to a hot new travel dance, a rowboat reenactment, and whatever the hell this is. Unfortunately, the Rams bench's shenanigans won't continue, yet another reason to hate No. 2 Duke.