The Best Burlesque Shows in the Entire US

Jen Arbues
The Best Burlesque Shows in the Entire US July 12, 2018 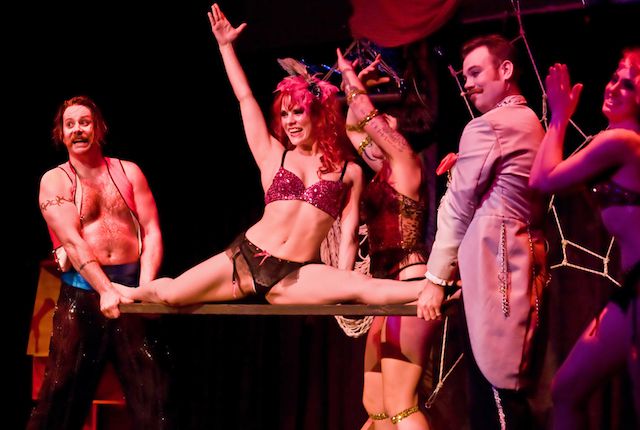 Burlesque isn’t exactly a new thing. Theatrically, it’s been around since the late 17th century. In the U.S., burlesque as we know it today gained popularity in the 1860s in cabarets and theaters. Today, you can find burlesque troupes performing in pretty much any major city in America. But that doesn’t mean they’re all going to be worth your while. And with some shows carrying a pretty hefty admission fee, it isn’t always easy to decide which one deserves your money. So we’ve decided for you. Here are the best burlesque shows in the U.S. that you definitely need to see...

Tattoo culture and Comic-Con don’t seem like two things that should go together. But Blackheart Burlesque says they absolutely should. From its Wonder Women to Star Wars storm troopers to Star Trek redshirts, the show is a literal alternative nerdgasm. Who are we to argue with this kind of mashup?

What’s that, you say? You love the excitement of a traditional luchadore wrestling match but wish it would also feature scantily-clad ladies? Well, look no further than sunny Los Angeles for exactly that: Lucha VaVOOM is a mix of burlesque, comedy and classic Mexican wrestling that you won’t soon forget.

This New Orleans revue is pretty much what you would hope for when it comes to a modern burlesque show. You may not find storm troopers or luchadores here, but you will get magicians, fire eaters, and aerialists. It’s the classic three ring act brought up to 2018. Did we mention the sword swallowers?

Vaudezilla may seem like your typical cabaret-style burlesque show, but it definitely isn’t. With new casts on the weekly and new themes every month, you’re guaranteed a unique experience every time. Plus, it offers actual classes and workshops, so you can make burlesque the career you’ve always dreamed of.

Le Scandal has been a New York mainstay for years, and with good reason. The show features tons more than just burlesque, including a comedian acrobat, a sword swallowing bellydancer and striptease trapeze. It’s also been heavily featured on TV, so you may actually already be familiar with it.

For the 21 and up crowd, X-Burlesque takes the sex factor of a typical burlesque show to new heights. And why wouldn’t it? It’s in the heart of Las Vegas, the country’s #1 adult playground. One thing you can’t miss: its classic striptease in a traditional burlesque champagne glass.

Bringing back the traditional 1950s-style burlesque show, Bustout Burlesque combines classic striptease with a live jazz band. It’s New Orleans, so even if you’re not into half-naked women on stage, you’re sure as hell going to be into the music they’re performing to. And that Oyster Girl burlesque fans are so familiar with? She got her start here, on Bourbon Street.

Keeping the heart of traditional burlesque alive in Philadelphia is the Peek-A-Boo Revue, which has been around since 1998. The show focuses on the “showbizzy-ness” of cabaret and features an ensemble of both men and women. So they’ve got a little something for everyone.

Viva Dallas Burlesque has the honor of holding the title of “The Largest Burlesque Show in Texas.” Which is saying something, because if you’re going to be the largest anything in Texas, you’ve got to be pretty f—ing large. Come for the outrageous feather costumes, but stay for the aerial performances, which are insanely amazing.

Burlesque has always had a theme of inclusion running through it, and you won’t see that anywhere more than in Shades of Burlesque. The show is New York City’s only all black burlesque revue. It was founded by Sweet Lorraine, a queer WOC and seasoned burlesque performer, whose aim is to foster nurturing, sexually expressive spaces for others in the LGBTQ community.

If New Orleans’ Bustout Burlesque is on one end of the spectrum, with its homage to classic shows from the 1950s, the Slow Burn Burlesque show would be on the exact opposite. Featuring acts like a sideshow mystic, a mime and goddam tarot readings. On top of both comedic and sensual burlesque, Slow Burn is the Barnum and Bailey of burlesque shows.

Advertised as “Atlanta's sci-fi punk vaudeville burlesque goofballs,” Blast Off Burlesque is known for combining the sex and fun of a typical burlesque show with the classic horror and sci-fi pop culture of the ‘50s and ‘60s. Expect ray guns. Expect Planet of the Apes. Expect f—ing Gilligan’s Island.

Originally from New Orleans, The Atomic Bombshells now call the Pacific Northwest their home. But their roots are true to the southern leanings of classic French Quarter shows. They’ve been featured everywhere, from PBS to MTV, and their “gospel of glitter” has sold out shows around the world.

Dirty Dime Peep Show is anything but your average burlesque (or even your average neo-burlesque). It’s probably the raunchiest show you’ll ever come across, with in-your-face acts that feature comedians and drag queens as well. And a lipstick trick, but we won’t get into detail there.

One of the best burlesque acts in LA, Seduction Burlesque is a classic cabaret style show out of Long Beach. But it isn’t just classic. It’s a sexy mix of both men and women, as well as acrobatic aerialists, who do their thing on top of the bar, in the air, and in the audience seating as well.

Hubba Hubba Revue is well-known enough to have its own Wikipedia page, so that’s saying something. The San Francisco based show features visiting performers from across the country, but in its core group you’ll find anything and everything, from acrobats to aerialists, comedians, contortionists, magicians, and vocalists. Plus, it commissions local artists for its flyer art, which makes it one of the coolest revues on this list.

If you’re going to do a burlesque pop culture homage to Disneyland, there’s definitely no better place in the world to do it than in LA. Peepshow Menagerie goes beyond the typical burlesque show to bring in comedic hosts and a troupe that shares your love for Weird Al Yankovic equally. Naked Weird Al? Who wouldn’t want to see that?

This San Diego show is a definite nod to classic burlesque, with feathers, outrageous costumes, and more feathers. You’ll also find any and every body type represented on the Hell on Heels stage, giving it a little something for everyone.

As the longest running weekly cabaret on the west coast, Sinferno has this whole burlesque show thing down. Classic burlesque is intermixed with fire performers, go-go dancers, and a juggling lasso cowboy. Tickets can hit upwards of $100, though, so be sure juggling lasso cowboys are a thing you’re really ready for.

If you thought changing a lineup on a weekly basis was a real feat, let Wasabassco show you how it’s really done. This world-renowned troupe changes it up nightly, which means you really will never see the same thing twice. Illusionists, contortionists, and male go-go dancers are just the tip of the iceberg.