Life Without These Inventions Would Be Total And Complete Mayhem

Camila Villafane
Life Without These Inventions Would Be Total And Complete Mayhem April 16, 2018 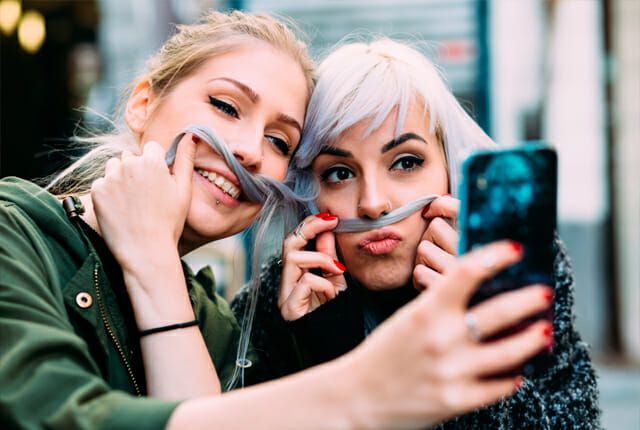 Inventions that make life easier, or at least more bearable

It's safe to say that, as humans, we're pretty effing resourceful. Just look at some of the complicated devices we use everyday that make life better. Now imagine how much life without these inventions we use everyday would suck. Sadly, we take a lot of things for granted. But you can bet that we wouldn't be able to survive without them. So in honor of inventions like smartphones (which, let's face it, we'd be totally dumb without), Netflix, and the internet, we're listing these incredible inventions that make life easier. So don't take them for granted.

A World With No Internet

Can you imagine not having the internet to rely on? It sounds like the storyline of a crappy apocalyptic movie. We wouldn't have social media to rant on after a s---ty day at work, and we wouldn't be able to keep up with the Kardashians, like, at all. We'd have to interact with flesh-and-blood people instead of messaging them on Whatsapp. Oh, the horror!

No Smartphones? No Fun

The world would be so messed up without smartphones. We'd have to stop at gas stations and interact with people (gross) and ask for directions instead of using Google Maps. We'd go back to reading magazines in the bathroom instead of sifting through top-10 lists. Worst of all? We wouldn't be able to leave a mean comment on YouTube while we're taking a dump.

Life Would Suck Without Medicine

Life expectancy would be reduced greatly. Most likely, a common cold would kill us quick and easy. Oh, and don't get into an accident or break your arm playing B-ball or you'll probably get an infection and die. Yup, life without these inventions would totally f--- up humanity to extinction.

Life With No Cash

Without physical currency we wouldn't be able to pay for stuff the way we usually do. So we might have to resort to things like virtual cash which would leave us vulnerable to hacking. If virtual money isn't the way to go in this jacked up utopia, then we'd have to resort to trading items like wool and corn like our ancestors did in the old days. Sounds like fun.

Boats and cruise ships have come a long way, but life without these inventions would be depressing AF. Imagine all of the continents that would have never been discovered. The concept of international trading would be unknown, and you'd miss out on the health benefits of boating or going on an all-boys gay cruise.

Life without credit cards would leave us really vulnerable. We'd have to carry loads of cash in our pockets and leave the rest at home. This would turn us into a huge walking target for thieves, basically at all times. You'd have no choice but to leave your cash in the bank.

We'd have to keep our food in a cold basement if we didn't have refrigerators. Now imagine having to store beef, chicken, and fish. You'd have to eat it right away or else the meat would rot in a few days, and you'd be left with a stinky situation. On the plus side, we'd have to eat fresher foods with no preservatives, so there's that.

You'd have to get off your lazy ass and change the channel and adjust the volume on your TV yourself. What a sad, pathetic life that'd be. Since we're all pretty much lazy f---s, we would likely get stuck watching the crappiest shows. Because let's face it: We'd rather watch a whole Dr. Phil episode than get up and turn the dial. It's true.

By "wheels," we mean a nice sports car. Or that piece of junk you park in your driveway every day. We wouldn't be able to travel long distances, but we would have to walk or ride a bike, which is good for our health. Imagine all the money you'd save because you wouldn't have to spend money on a mechanic or gas.

A World With No Computers

Imagine how not having computers would affect our jobs today. There'd be no programmers, virtual assistants, web and graphic designers, data entry clerks, online banking, and no social media. Models would have to turn to modeling agencies instead of Instagram, and we'd end up hoarding loads and loads of newspapers and magazines.

You could only travel long distances by car, which would take ages, and if you're seasick, good luck because you'd have to travel by boat. Also, quick getaways would be non-existent because it would take too long to run away "for a few days" to Hawaii. Oh, and doctors wouldn't be able to transport a kidney, or a heart or a liver to a new patient. Lovely. Just lovely.

Without condoms, everyone in the world would be catching STDs left and right, and getting unwanted growths where the sun don't shine. Of course, the only thing worse than STDs are kids. The world would be full of unwanted humans. And you thought the highways are already crowded now.

If GPS Wasn't a Thing

Without a GPS system, you'd have to go back to deciphering those poorly designed paper maps. We sure hope you kept your magnifying glass handy. Chances are a map wouldn't help you either, so you'd end up walking around in the middle of nowhere for what seems like forever, only to later learn you were only two blocks from your destination.

Living With No ATMS

You'll need to have a pair of solid legs and nerves of steel to put up with the long lines at the bank because everyone would be there trying to withdraw money the old-fashioned way. Human tellers aren't as quick or as friendly as an ATM either, and neither are the impatient people trying to skip you in line.

Our definition of beauty would totally change if makeup didn't exist. We'd have to get used to showing off our fresh, natural faces. I know. The insanity! Of course, Photoshop would allow you to technologically get rid of wrinkles, pimples, and unwanted eyebags on ads and magazine covers. But we'd probably still spend a ton of money trying to get our skin to look flawless, so facials, moisturizers, and pore reducing creams would be a total hit.

A World With No TV

Without television, we wouldn't be "Keeping Up with the Kardashians," and that's so sad, it hurts. But it wouldn't be as tragic as never knowing how humanity would survive a zombie apocalypse on "The Walking Dead," or what life is like inside a women's prison on "Orange is the New Black." Shall I go on? No?

You'd rely on someone to have to draw you on a paper to know what you look like. When someone called you ugly, you'd have to believe them. You might look for other reflective surfaces because mirrors don't exist, but hello, you're still vain as hell. People might even dedicate themselves to telling others what they look like. Now wouldn't that be a fun job?

Think of hats, gloves, shirts, jackets, pants, and socks. Life without these inventions would be chilly and embarrassing. There'd be no mystery. Men couldn't lie about the size of their manhood, and we'd resort to wearing leaves and animal skin. I wonder if PETA would be mad.

Your Life Without Digital Cameras

Digital cameras are the bomb. But without them, we'd have to resort to disposable cameras, or regular reflex cameras, which means we'd have to go back to getting films developed. Then we'd be totally disappointed as 90 percent of the pics you took like like a blurry mess.

Who Invented the Light Bulb?

Thomas Edison invented the light bulb according to most, but only because he patented it. In fact, lots of scientists did work that led to the game-changing invention. But no matter who invented the light bulb, you wouldn't be able to read at night without it. At least, not unless you used candle light, which isn't bright enough and would strain your eyes And hello? It's the main reason why hundreds of houses burn down accidentally. If you forget to blow one out, your whole house would go up in flames. Thanks, but no thanks. I choose electricity.

In 1752, Benjamin Franklin flew a kite with a metal key and discovered electricity. He's lucky he didn't die. But without electricity, we couldn't watch "American Idol," save the world on "Call of Duty: Black Ops III" for PS4, and you'd be late for work because you couldn't power your alarm clock.

Living In A Gun-Free World

Without guns, we wouldn't have to worry about school shootings. But, then again, humanity is so destructive that we'd probably find other ways to hurt each other. We'd probably stick to sword fights to the death, or we'd grenade, bomb, or Molotov-cocktail the bejesus out of each other when we're walking in the street.

A World Without The Film Industry

Without movies, there'd be more Broadway-type theaters, but no special effects, no custom designs, or 3-D. Yes, I'm yawning too, just thinking about it. Of course, we suppose that it's better than the alternative, which is to walk around a park like a sucker, or read a book, because you wouldn't be able to Netflix and chill.

No Toilets, No Fun

Can you imagine what it'd be like if toilets didn't exist? People would be pulling their pants down to go No. 1 or No. 2 right in front of you. You wouldn't be able to take a stroll through a park or have a nice picnic without someone having to go. Also, you'd have to go out at night if you had to pee because you wouldn't have a pot to piss in inside the house.