24-Year-Old Dumps Her Boyfriend, Quits Her Job and Moves Into a Luxurious Van With Her Dog

Karla Pavelka
24-Year-Old Dumps Her Boyfriend, Quits Her Job and Moves Into a Luxurious Van With Her Dog February 26, 2020Leave a comment 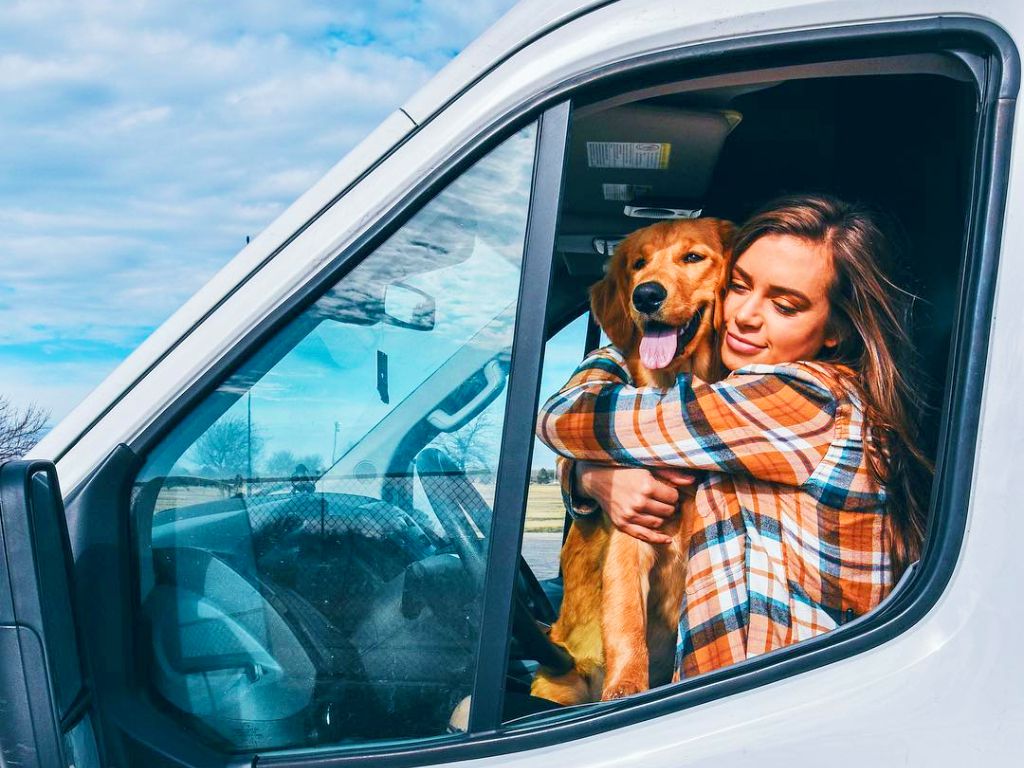 We've all dreamt of starting over, but Sydney Ferbrache is a woman who actually did it. Her incredible story started innocently on a trip to Europe with a college friend. Although many people take the occasional summer vacation or weekend getaway, Ferbrache soon realized that she wanted to live life on the road for good, even if the people around her weren't willing to accompany her along the way.

This is Sydney Ferbrache. She's a native of Indianpolis, Indiana. When she graduated from college, she did something that changed her life... she traveled. And once she had a taste for life out on the open road, she never turned back.

Ferbrache had never been out of the country before when she and a friend went to Europe for three weeks. She liked it so much that a year later, she went to South Africa. But this time, she took the journey solo.

Bit By The Bug

"That was my first trip alone, and it really changed my life," she said. Ferbrache was completely hooked on traveling. Then, she saw an Instagram post of a girl in a van and it gave her a life changing idea.

Ferbrache decided to travel in a van, as well. She became obsessed with the idea. "I saw this picture and it took me down this black tunnel hole of van life. I was scrolling for hours a day on my laptop and in between homework and everything else, just looking at vans," she said.

She asked her boyfriend at the time to go with her. "He was a chef, I was an events manager for a restaurant, we were working 70 to 80 hours a week and were totally miserable," she said. Then, the couple bit the bullet and bought a van for themselves.

Together, Ferbrache and her boyfriend purchased an $18,000 Mercedes Benz Sprinter. They then spent $10,000 on renovations to make the van feel just like home. "That was the start of how I discovered van life," Ferbrache said.

Taking the Show on the Road

Ferbrache and her boyfriend set off on the road in September of 2017. They had been together for a year at the time and for a while, it worked out well. But there was trouble brewing under the surface that would soon leave Ferbrache on her own.

The two had different views of their travels. "He loved the van life stuff, but he thought of it as a temporary, 'I'm gonna let Sydney do what she wants and get it out of her system and then we'll get married and have kids and have a house,' and I didn't like that at all," Ferbrache said. "I didn't have that mindset. This isn't going to be a short-term thing." She realized she had a tough decision to make.

The pair broke up. Not only that, Sydney also let her ex keep the van. "I didn't want him to think that I had used him in order to get the van," she said. "He ended up selling the van and never traveled in it again."

A New Adventure, In a New Van

Ferbrache immediately began looking for a new van. She knew that life on the road was her passion, and she would continue to travel even if there was no one by her side. She worked many jobs so she could save the money for a van of her own. She did freelance web design and was a nanny during this time, before she had the money to pursue her passion again.

She eventually saved up enough to buy a $24,000 Ford Transit van. Then, she set out to work on renovating it. She added a full kitchen with a fridge, stove and sink. She also added a bed that can be turned into benches and a table.

On The Road Again

Eight months later, she was ready to hit the road again. She had worked on renovating the van from May to September of 2019. She was almost ready to go, but she was just missing one thing...

One week before she left, Ferbrache added one more thing to her carefully cultivated van. She got a puppy. The puppy was golden retriever who Ferbrache named Ella.

On the Road Together

The first place the pair went was Yellowstone National Park. "I sat there the first day, just staring out the windows at the mountains," Ferbrache said. "I spent two to three days there just in awe. I couldn't believe my life."

Together, Ella and Ferbrache have traveled to twenty different states. That list includes Montana, Utah, Arizona, California and Oregon. They've even driven up to Canada to visit Quebec.

A Life on the Road

Ferbrache estimates that she spends about 300 days a year on the road. She does frequently return home, however. She visits her family in Indiana every four to six months to stop by to see her nephew.

Ferbrache catalogues all her travels. She's a social media maven, of course. She also helps other #vanlife fanatics by posting the details of her van build to help others find their own vehicles. You can find her on Instagram. She also has a Facebook page.

But for Ferbrache, it's not just about great photos. Van life is a way of life. On her website, she gives a plenty of tips for how to follow in her footsteps. Her tips include everything from how to renovate a van to how to make money remotely, so you never have to stop traveling.

Alone, But Not Lonely

Just because Ferbrache is alone on the road doesn't mean she's lonely. "I love going to van gatherings and talking to people, but it takes everything out of me," she said. "I enjoy so much being alone and if I'm ever lonely I go into a city where I can go to dog parks or talk to people on Instagram and meet up at their vans." Plus, she always has Ella.

While Ferbrache's travels have been mostly positive, there was one time when things got scary. Ella needed surgery. "Suddenly I was in California and I didn't have anyone to get advice from, or my mom to take her to the vet with me or console me," she said. "It was one of those situations where I was like, 'Oh, wow, I'm an adult now and I have to do this on my own."'

For now, Ferbrache has no plans to give up van life. ""It's been one year, maybe two years from now I'll reevaluate and make sure I'm still happy and this is something I still want to do," she said. "I've never woken up once in the last year and not felt like this isn't exactly what I should be doing. I don't foresee anywhere in the near future where I want to stop, but I also don't want to hold myself to this idea that I have to be on the road."

Ferbrache's travels have served as an inspiration for many. It's especially been inspiring for women who want to travel solo. "The number of women who message me saying 'I never heard of van life before you,' or 'I never thought I could do it without a partner,' the number of people on the road who say it's specifically because of me, that's so powerful," she said. "I never anticipated having that kind of impact on anyone."

Ferbrache has some advice for other women who want to travel solo. "My biggest tip would be to always keep safety in mind and keep it a concern and priority, but to not allow it to rule your life and stop you from traveling simply because you're a solo woman," she said. "We are taught to be scared. We don't feel that way innately."

While being on the road isn't for everyone, for Ferbrache, it's perfect. "My personality fits so well with being on the road. I need constant stimulation and a change," she said. "It lessens my anxiety, instead of the stability that most people need.” It sounds like she found her calling.