Small, Adorable Animals That Are Secretly Deadly and Terrifying 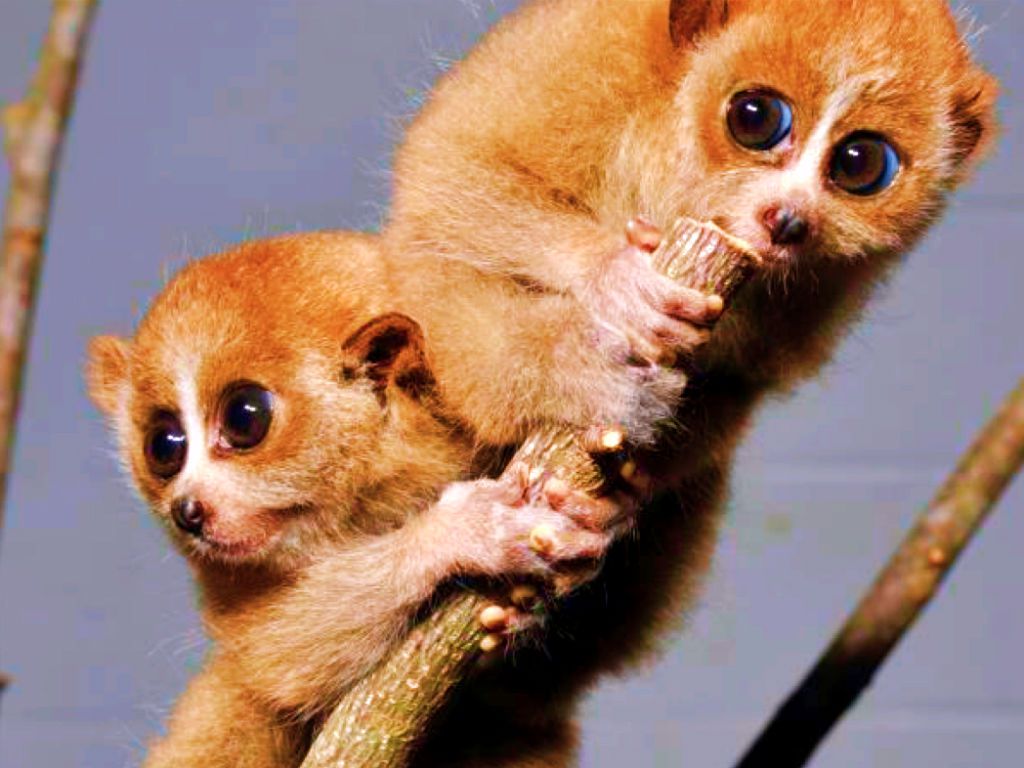 Tread carefully. These cuddly creatures can become cold-blooded killers in mere seconds. Perhaps unbelievable but nevertheless true, below are some of examples of friendly fur balls that are secretly fiendish and fearsome.

Don't be fooled by this little guy's cute whiskers and tiny paws. The Grasshopper Mouse is "only distantly related to the common house mouse" and is a carnivorous species that feeds on insects, snakes, and scorpions. It's also immune to the various venoms and poisons its prey uses to defend themselves. Stalking its prey like a cat, the mouse often defends its territory by "howling."

While this fella looks like a normal house-cat that's wandered outside his fence, the Black-Footed Cat is considered one of the deadliest cat species on Earth. The smallest cat in Africa, this nocturnal hunter averages fourteen small animal deaths a night and preys on rodents, birds, antelope offspring, and rabbits.

Dingos are experts when it comes to eliminating a threat. When pursuing their prey, these wild dogs "access and target" their potential meal by deducing how much damage their target could inflict should the hunt be reversed. Sizing up their prey and recognizing their weaknesses allows the dingo to attack large animals such as kangaroos and water buffalo. Most dingoes will corner and exhaust their prey before going in for the kill by attacking the throat.

Might not want to cuddle too hard with this wide-eyed little dude or else you run the risk of becoming the target of its toxic bite. By licking a sexual gland on their forearm, the Slow Loris is able to secrete a deadly toxin using its saliva. It can also be spread on their fur during grooming sessions as a means to protect their offspring from predators.

While most primate species are known for their occasional acts of aggression, the vervet monkey is especially unique when it comes to their displays of anger. This particular monkey will engage in acts of spite when it comes to ensuring their food supply and will actively destroy their competitor's gains instead of consuming or stealing it.

One of the few poisonous mammals on the planet, the platypus has a spur on its hind foot capable of delivering a toxin that causes severe pain to humans. In worst cases, the pain can last for days or months depending on the severity of the injury and cause temporary paralysis.

Not only do mongooses have the ability to repel snake venom, they are avid killers of the species. However, their ability to efficiently hunt prey has led to accidental depletions of the native species as evident during their introduction to the West Indies and Hawaii.

Known for constructing intricate dams and canals, beavers are not only master crafters but they are fiercely defensive of their handiwork. If an intruder threatens their territory, a beaver will devote themselves to tracking it down and engaging in an often violent confrontation. In 2013, a fisherman suffered a deadly attack in which a beaver punctured an artery in his leg causing severe blood loss.

For the most part, capybaras are known to be one of the gentlest creatures on Earth, often leading to "unlikely animal pairings" between their species and others. However, these semi-aquatic rodents are capable of aggression and make bark-like noises when threatened. The species suffers from reproductive competition leading the dominant male to often commit infanticide to promote the well-being of their own offspring rather than their competitor's.

Not nearly as formidable as their very distant cousins the Giant Panda, these scarlet little devils are internet sensations when it comes to their wild antics. Used as more of an intimidation technique rather than a true demonstration of their tiny wrath, Red Pandas will stand on their hind legs to appear larger in stature as assert dominance.

These plush-cuddly marsupials are very stubborn when it comes to defending their territory. Minor disputes often result in small annoyed grunts or brief wrestling matches. However, a male koala will attempt to displace its rival by cornering it and harshly grabbing its shoulders and violently biting him into submission.

When defending their territory, these birds of prey will engage in "hooting contests" against their neighbors and potential threats. Should the contest turn aggressive, the owl will spread its wings and issue a prolonged high-pitch hiss or scream. If the aggressor still doesn't take the hint, the owl will then "hop forward" and begin striking at their opponent's feet, using their claws to grasp at any flesh and rake through it.

While considerably less annoying than Alvin and his brothers, the Siberian Chipmunk's deadliness lies in their ability to spread diseases among humans. With such a high reproductive rate, the small rodent is capable of carrying deadly viruses, such as Lyme disease, and pests like ticks and parasites throughout a population. They also pose a threat to other native species such as the bank vole, wood mouse, and red squirrel.

First off, yes, that popular "X-Men" character is based on an actual animal. Second, the reputation is certainly upheld by this ferocious little guy. Able to kill prey several times larger than itself, these wild wolverines quite literally pack a punch with their sharp claws and canines. Some of their biggest targets are lynx, moose, elk, wolves, and deer.

These grassland rodents are very well adapted to defending themselves against predators. Using a series of high-pitched vocal calls, they are able to communicate what animal is approaching, how big it is and how fast. Their natural competitors for resources are squirrels, who they routinely hunt and slaughter for sport. According to "New Scientist" one expert observed the "quick, subtle and unanticipated" killings, describing one incident in which a squirrel was bitten to death and the carcass left abandoned.

While this spiky little guy has now come to replace dogs and cats as household pets, the hedgehog is still considered a deadly species. When introduced to New Zealand and Scotland, they started to overpower the native species of ground-nesting birds, insects, and lizards. Due to their closeness with the human population, hedgehogs can also be carriers of disease including cancer.

Chinchillas can be extremely difficult to handle and display a variety of behaviors when it comes to telling you to back off. Normally a very quiet animal, barking and high-pitched squeaking signal annoyance and disapproval. "Fur slipping" is the act where a chinchilla will lose the fur in the area where it was improperly touched or handled. They will also engage in urine spraying to deter potential predators from getting too close.

Despite being called "the world's happiest animal," the quokka does have its occasional mean streak. In 1992, the Rottnest Island Nursing post in Australia admitted seventy-two patients who had received bite wounds from the cuddly creature after attempting to pet and feed it. Quokka mothers are also known to "eject" their offspring from their pouch if pursued by a predator as a means of distraction.

For the most part, llamas (and alpacas) are pretty docile animals and used to guard small dogs. Any sign of aggression a llama displays toward its own kind is for disciplinary purposes. When it comes to human interaction, if a llama is bottle-fed or over-handled in its youth, it becomes more attached to its owner and begins to think of a human as its own kind. Common behaviors that would be displayed during this time are spitting, neck wresting, and if severe, berserk llama syndrome where the imprinting has led to attacks such as chest biting and ramming.

While the assumption that donkeys can be very stubborn is true, it's only because of their strong need for self-preservation. Naturally untrusting of humans, it's difficult to frighten or convince one into doing something it doesn't want to or perceives as a threat. Once trust is earned, donkeys are willing to become friendly companions or dependable workers. A donkey's main means of defense against predators are biting, kicking, or striking.

Most people don't tend to second-guess picking up a cute caterpillar they find strolling through their gardens but this species in particular you may want to avoid. The Lonomia Obliqua contains a special toxin that's released by its bristles when touched. The toxin is capable of blood hemorrhaging and brain death. However, in order to experience the full effect of this deadly defense system, a human "would need to be stung at least 20 to 100 times."

This little sea-dweller is capable of killing 26 people with a single dose of its venom. If provoked, the Blue-Ringed Octopus will change color, signaling its impending deadly bite. Though initially painless, the attack will trigger respiratory failure, paralysis, blindness and heart-failure within minutes. There is currently no anti-venom available to combat the toxin.

Everyone of course knows the infamous Steve Irwin story regarding his confrontation with one of these creatures. The most distinguishing and deadliest feature of a stingray is its stinger located on its tail. While attacks on humans are extremely rare, if provoked or accidentally stepped on, contact with the stinger leads to intense pain and muscle cramps. The attack is only fatal if the barb, which breaks off, lodges itself into a vital organ.

This beautiful blue sea slug is among the most poisonous due to the nematocysts they swallow from other sea-dwellers which cause a stinging sensation when touched. The painfulness of the sting can be compared to that of the Portuguese Man O' War with symptoms including red welts lasting for three days, the inability to breathe, and intense fever or shock.

While these interesting looking fish are well-known for using their inflation to scare away predators, their deadliest defense is their toxicity. Containing tetrodotoxin, which is 1,200 times more lethal than cyanide, the substance is able to kill 30 humans and as of yet, there is no antidote. Symptoms include a numbness of the tongue and lips, nausea, rapid heart beat, and muscle paralysis.