Camila Villafane
These Adorable Halloween Pumpkin Ideas Will Make This Your Cutest Halloween Ever October 16, 2017 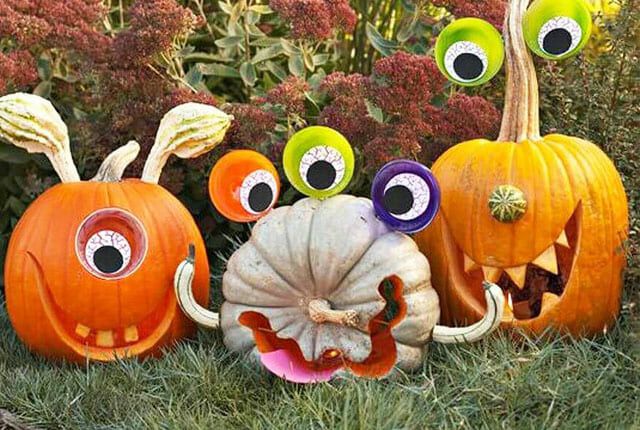 Pumpkins are really popular around Halloween because everyone's carving into them, hoping to make the scariest looking pumpkin in the neighborhood. But these adorable pumpkin carvings prove that Halloween doesn't have to be scary, and can bring out the artist within.

We hate to get all mushy on you, but you'll be the cream of the crop if you use creative patterns to create Jack The Pumpkin King, or Cinderella's carriage, or even a pumpkin pileup that’s so sweet, it might give you cavities.

This Is A Hoot

Have a happy H-owl-oween with this owl pumpkin carving idea. Those big eyes will really light up a room or a porch when you put it on display.

Oh, my ghourd. What better way to turn a pumpkin into a work of art than by drilling? Who needs Jack when you can make a mason jar with fireflies. Orange you pumped for Halloween yet?

Adding a Disney theme to your adorable pumpkin carvings will really pump you up. But if your neighbors can't appreciate a carving of Tinker Bell, then they don't know jack.

You'll never have a nicer set of wheels than when you carve your very own VW Camper. It will turn the carving competition's brains into mush.

All Eyes On Jack

Make Halloween great again! All you need are some googly eyes, a bit of creativity and maybe some straw, and you'll have coolest little pumpkins that'll help put a happy face on your kids.

Lace-patterned pumpkins are like pumpkins on steroids. Guess that would make them jock-o'-lanterns. Get it? With a bit of lace work, you can go all Martha Stewart and carve yourself an artsy little pumpkin.

What do you get when pineapples meet pumpkins? Uh, that would be one of the most adorable pumpkin carvings ever. It's so tropical. Seriously, cut it out!

Get pumped up for Halloween and scare the daylights out of people with these pumpkins within a pumpkin. It's a jacked-up idea with no escape.

Carve out some fun this October with these amazing mini-pumpkins. You can cut a hole in them wide enough to fit some fake vampire teeth. Now that's the kind of jack we could sink our teeth into.

Carving is like a cat-and-mouse game, so turn your jacks into a friendly kitty and mouse using a gouging tool to make the ears and whiskers. You can even use black felt to give your pumpkin puss some ears.

Embrace your inner Dr. Giggles and cut some eyes, noses and a mouth. Then really go all out and take your anger out on Jack, creating slits for a mummified motif that's a total winner.

Turn your walkway into a candy lane. Who needs Charlie Brown's pumpkin patch when you've got your apple-candy-themed pumpkin candy? You'll feel like you've ended up in the wonderful land of Oz.

The only things cuter than Chris Pine are these porcupine pumpkins. We just hope they listen to the crossing gourd or these pump-cupines will end up squashed.

Time To Pump It Up

A stitch in time saves nine, but if you decide to carve a clock out of this jack-o'-lantern, you can always use a pumpkin patch to repair this clock.

Who wants a Pump-Mac for Halloween? Too bad we can't just order a few of these and then sit back on the living room couch to binge-watch some Netflix shows all week.

Can you think of a more ideal way to store some tasty Halloween lollipops than by going all Jerseylicious and giving your pumpkin a new hairdo? It's probably torture for the candy, but fun for us.

If you have absolutely no freaking clue what the difference between a carving knife and a butter knife is, then try this non-carving solution. But you'll have to be a crafting whiz to turn those mini-pumpkins into cutesy mini-pumpkin cats.

It takes a lot of guts (or a lack of guys, in this case) to pass a pumpkin off as a candy-striped popcorn holder. With a bit of hot glue to stick the popcorn, it'll look good enough to eat.

You don't really need to do any carving, but a little gluing might be nice to turn an assortment of differently shaped pumpkins into Winnie the Pooh. Just don't forget the honey pot.

Get really expressive this Halloween by turning your pumpkins into emojis. It requires little to no carving, but plenty of paint to get these pumpkins all pumped up for Halloween.

How about a pumpkin house to squash the neighborhood carving competition? This jack-o'-lantern is located in the seedy part of town. Literally.