Jen Arbues
These 2 Puppies Were Saved From a Tar Pit Moments Before Their Certain Death October 17, 2018 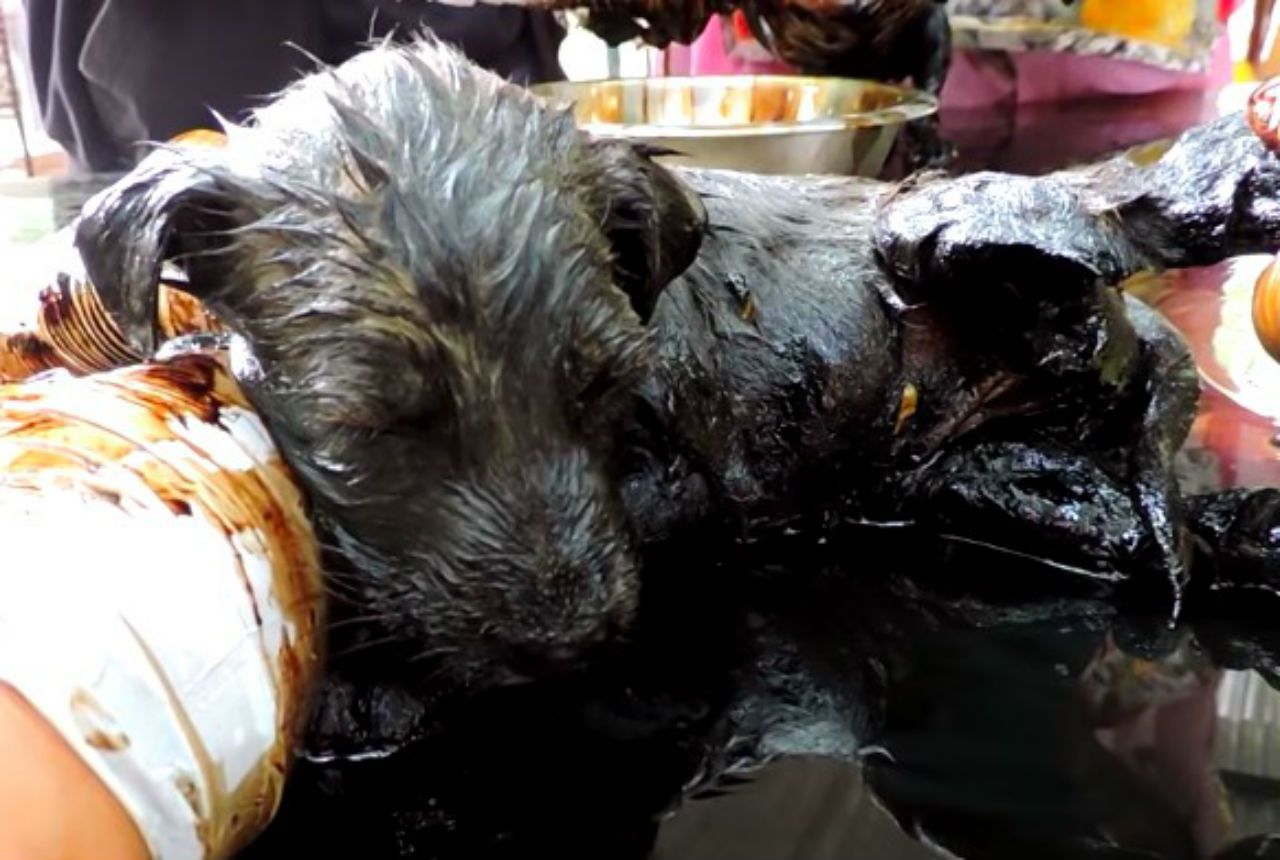 For many stray dogs around the world, life is difficult and much too short. But for these two puppies who were thrown into a tar pit in Chile and left to die, a group of unlikely heroes came along and rescued them, giving them a second chance and a new lease on life.

Airsoft isn’t exactly a sport that makes one immediately think of animal rescue. But in June 2013, the Axis Airsoft Group of Antogafast, Chile did something extraordinary that put them into that category of heroes.

The Axis Airsoft Group was about to start shooting when they heard strange cries somewhere in the distance. When they went to investigate the source of the noise, they came across two puppies struggling to escape a pool of tar.

The group quickly realized that the dogs weren’t trapped on account of some random bit of misfortune. Rather, it was clear to them that the pups had been thrown into the tar pit on purpose.

The Need to Act Fast

The dogs were struggling for survival, but the tar was making it impossible for them to gain any traction on their own and make it out. Instead, they were being pulled further down into the pit.

The group’s first attempt at rescue did not go according to plan. They grabbed rope and tried to wrap it around the sinking pups in order to pull them out, but between the pull of the tar and the dogs’ own struggle against it, it was clear they were going to need something else.

With the rope option being a total bust, the Axis players tried looking around the area for something else that they could use to free the dogs. One group member grabbed a plank of wood, hoping that it could be used for leverage.

As the dogs tried desperately to stay afloat, the group realized that they were going to need something to shorten the distance between them and the pups. So they grabbed a tire to use as a platform.

One of the Axis players steadied himself on the tire and tried to pull one of the dogs in with the rope. But the weight of his body was slowly beginning to force the tire into the tar pit as well.

The other members of the team came in to help. As they held onto that first player’s belt, he reached as far as he could into the tar pit and grabbed ahold of one of the pups.

Finally, it seemed as though the group was going to have success with one of the dogs. But as one of the players attempted to pull it from the pit, the tar pulled back, and the dog began to yelp out in pain.

Realizing that pulling the dog from the tar was an impossibility, the player released it back into the pit. As their options dwindled, the group worked quickly to reevaluate the situation and find a solution.

A Push in the Right Direction

Knowing they couldn’t pull the dogs from the tar, the team decided to take the opposite approach. Using whatever they could, they began to push the pups toward the edge of the pit as they tried their best to paddle.

With the help of the Axis group, and after a great deal of struggle, the puppies were finally able to get their paws onto solid ground. Once they made it to the edge of the pit, the players could pull them the rest of the way.

Even though the dogs were out of the pit, they weren’t out of the woods just yet. As the tar began to dry in the sun, the potential for the dogs to suffer permanent damage became very real.

The Axis team worked quickly and gently to remove as much of the tar as they could from the dogs’ fur and eyes. By this point, both pups were beyond exhausted, and they needed to be seen by professionals.

“Gatos Abandonados Antofagasta” is translated to “Abandoned Cats of Antofagasta.” It’s the animal rescue and veterinary hospital in Chile that the team members rushed the tar pups to as soon as they were able to pull them out safely.

Once they reached Gatos Abandonados Antofagasta, the pups were carefully cleaned and examined by rescue workers and veterinarians. The tar they had been submerged in was thick and water-resistant, so the process took quite a while.

The veterinarians who examined the dogs had concerns regarding the long-term effects of the tar exposure, especially in terms of respiratory illness. Both dogs were diagnosed with canine distemper, a potentially fatal viral disease.

Meanwhile, rescue workers returned to the site where the dogs had been pulled from the tar pit. While looking for clues as to how the dogs had gotten stuck, they found the bodies of six more dogs in a neighboring pit.

Lancelot and Laica, as the two pups would come to be known, wound up making it out of their ordeal intact. But the issue of killing homeless dogs as a means of dealing with their numbers remains a serious one in Chile.

Not Exactly Two of a Kind

Beginning by setting up 5-gallon buckets in a tiled bathroom, volunteers got to work cleaning up the dogs. By the time they had finished, they realized that the pair — which had been indistinguishable at first — were actually completely different.

Lancelot was the first to be cleaned up. The little boy turned out to be a German Shepherd mix with black and tan markings. Laica, on the other hand, wound up being a female Labrador Retriever mix with tan coloring.

Lancelot and Laica had gone through a serious ordeal together. And as such, Gatos Abandonados Antofagasta were a bit apprehensive about adopting them out separately. The organization had hopes that someone would adopt them together.

The folks at Gatos Abandonados Antofagasta took Lancelot and Laica with them to appear on several TV shows in Chile. Their hope was to bring attention to the matter of animal welfare and to spread awareness regarding animal abuse.

For Lancelot and Laica, TV fame brought them the attention of several families looking to adopt, and they were lucky enough to find their forever home. But for millions of other stray dogs in Chile, this isn’t the case. Luckily, the president announced in 2014 that the country would be launching a sterilization program in an attempt to help alleviate their numbers.