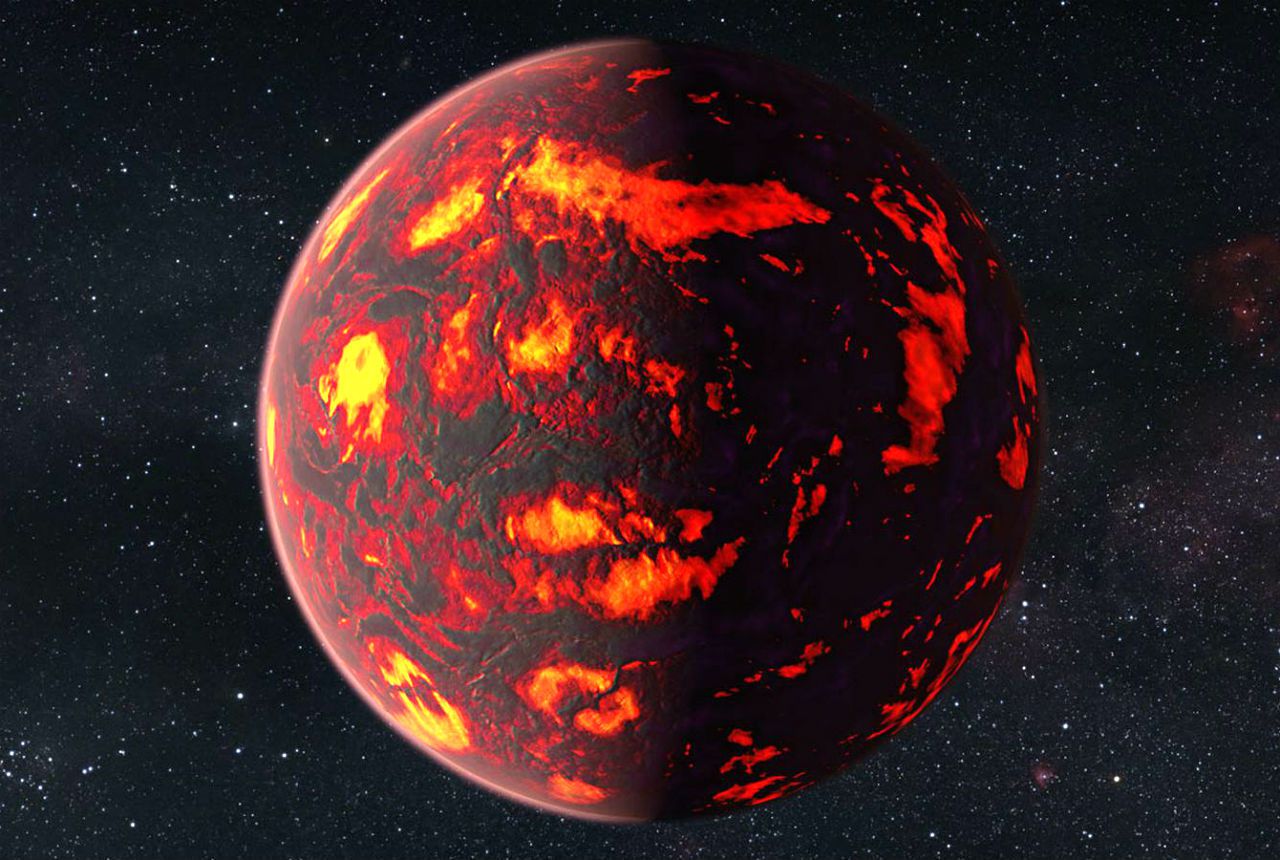 As scientists explore the universe, they keep finding more and more weird but awesome alien planets. Would you like to visit a world where it rains glass? Or how about one where it snows sunscreen? Possibly not. But these foreign planets are really cool anyway.

Gliese 436 b plays host to a fantastic phenomenon: Despite its temperature rising up to 800 degrees Fahrenheit, the world is still covered in ice. That's because Gliese 436 b's gravity is so strong that it keeps its ice crushed down into a solid form even as it should be turning to steam.

PSR J1719-1438 b is a planet that's made entirely out of carbon. Because of the large size of the world, it has an incredibly powerful gravitational pull, which has crushed this carbon core into a tighter and tighter ball. In other words, this planet has transformed into one enormous diamond. A diamond planet.

On CoRoT-7b, it snows rocks. This planet is tidally locked, meaning that the same side always faces the sun, and gets so hot that surface rock turns to lava, then evaporates. The resulting lava clouds drift toward the constantly dark side of the planet, where they harden again to rain down as solid chunks of rock. Wear a hardhat if you want to visit this place.

Gliese 504 b is bright pink. According to Michael McElwain, one of the astronomers who discovered the planet, it's color is "reminiscent of a dark cherry blossom, a dull magenta." That's because Gliese 504 is a relatively new planet, fresh from the oven, and is still glowing with heat.

TrES-2b has the distinction of being the darkest planet ever discovered. A big coal black gas giant, it would be hard to spot this planet with the naked eye even if you were right in front of it. Apart from a slight red glow, this world is almost invisible against the blackness of space.

KELT-9b is one of the hottest planets ever discovered. It orbits a blue A-type star that is literally too hot for the poor planet, where temperatures reach up to 7,800 degrees Fahrenheit. All that heat is causing the planet's mass to melt and evaporate away, meaning that in a few million years (a short time in the life of a planet), KELT-9b will disappear entirely.

The planets that make astronomers the most excited are ones that look a lot like Earth, because they could hold some form of alien life. Kepler-22b is one such planet. It's in the so-called "Goldilocks Zone," which means that it's not too hot and not too cold to sustain life. It's also covered in water, making it a prime location for finding E.T. at some point in the future.

Astronomers have described the giant planet J1407b as a "Super Saturn," which is pretty much what it sounds like. J1407b has a huge series of rings, made from ice and dust, which would put our own solar system's offerings to shame. It's a good thing planets can't feel inadequate.

The clouds on HAT-P-7b are made of corundum, which is the mineral that forms into rubies and sapphires. So when it rains on this planet, it actually rains precious jewels. Unfortunately, HAT-P-7b's high winds, volatile storms and intense heat mean that it wouldn't actually be much fun to be caught up in the rain on this particular planet.

PSR B1620-26 b, nicknamed Methuselah, is the oldest planet that's ever been discovered. This incredible world was first formed nearly 13 billion years ago, and it has outlived both of its parent stars, which have long since burned out. Methuselah is so peculiar that astronomers first assumed it was a failed star itself. Then they realized, no, it's just very, very long in the tooth.

KIC 12557548 is disintegrating. This planet is in orbit far too close to its star, and the 3,300 degrees Fahrenheit temperatures on its surface are causing it to break apart piece by piece, leaving an incredible trail behind as it travels. The resulting dust is so thick that it sometimes blocks out the star's light entirely (when viewed from the right direction).

GJ1214b is made almost entirely of water. We like to think of Earth as "the blue planet," but our home is nowhere near as wet as this distant world. Because of how much water is on GJ1214b, its atmosphere is made up of thick steam, and it also likely plays host to weird phenomena like hot ice and something called "superfluid water," which sounds like it'd be more fun than any water park.

The very awkwardly named CFBDSIR J214947.2-040308.9 is difficult to keep track of. While most planets tend to stay in orbit around a star, this one is on a journey of self-discovery. This strong, independant planet don't need no star, and is instead roaming the cosmos all by itself.

55 Cancri e, otherwise known as Janssen, is twice as big as Earth, but nearly eight times as heavy. This intense pressure creates some interesting effects. For example, the water is in what's called a supercritical state, which means it's both a liquid and a gas at the same time.

HAT-P-1 b is a gas planet similar to Jupiter. But HAT-P-1 b is actually half the weight of Jupiter, despite being twice as big, which means it's incredibly light. If you had a bathtub big enough, this planet would float very comfortably.

Thankfully, WASP-12b isn't actually a planet made of wasps. Instead, it's the hottest planet ever discovered, and it orbits its star closer than any other planet astronomers have found thus far. An entire year on WASP-12b takes only a single Earth day. So you can bet the New Year's parties are exhausting.

On the surface of Kepler-13Ab, it snows sunscreen. No, really. The planet's clouds are made of titanium dioxide, which is the primary ingredient in most commercially available sunscreen. This would feel like a blessing if you ever visited Kepler-13Ab, as the planet is tidally locked, which means it is constantly daytime on one half of the planet's surface.

HD 189733b is a gas giant, similar to Jupiter, which orbits very close to its host star. Its gassy surface is constantly at over 1,000 degrees Celsius (1,800 Fahrenheit), and it rains glass through 4,000 mph winds. So this is probably not a good place for a summer vacation.

30 Arietis Bb lives in a very crowded neighborhood. This planet doesn't have just one or even two stars. Instead, its solar system contains four stars and just a single planet (that we've spotted thus far). The view from the surface of 30 Arietis Bb would be absolutely incredible, but as the planet is a gas giant nearly 10 time bigger than Jupiter, no human will ever get to see it.

Along with its two sister planets, Phobetor was one of the first planets ever discovered outside our solar system. What makes it special is that it orbits a pulsar, a neutron star that belches intense electromagnetic radiation. If you were to stand on the surface of Phobetor, you'd see an incredible light show as this radiation hit the atmosphere, not unlike a souped-up version of the Northern Lights. Of course, you'd die from the radiation very quickly. But that's beside the point.

Described on the official NASA website as a literal "Tatooine" planet, Kepler 16b is special because it orbits not one but two suns. Binary star systems such as those seen in "Star Wars" are not all that uncommon. Snother binary pair, Alpha Centauri A and Alpha Centauri B, are actually the closest stars to Earth.