Baby Dugong Gets Friendly With Rescuers In Thailand 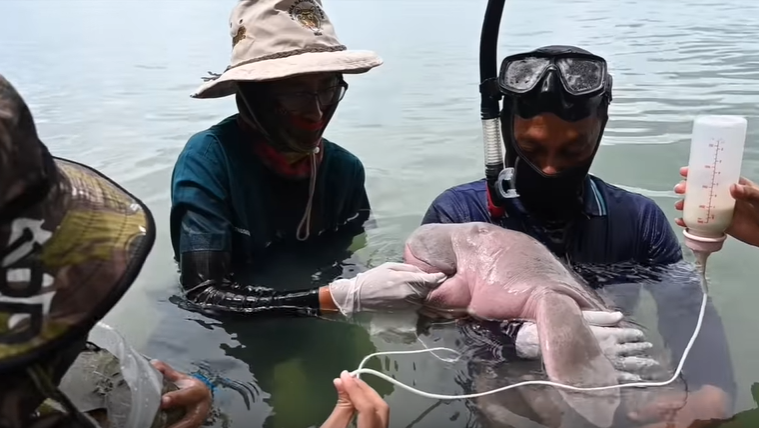 We all love heartwarming stories, and what better story than the one including a very cute baby dugong getting rescued and making new friends?

Let's see the incredible story that united an entire village from Thailand in order to rescue and care for a baby dugong who sadly parted ways with its mother.

This picture went viral and it melted the hearts of millions of people from all over the world. The reason behind this is that it shows us the effort that a group of good samaritans put in order to save a baby dugong. How did they find it?

For some unknown reason, a baby dugong lost its mother and arrived on the shore of a small Thai island. The fishermen noticed the animal and decided to help it out, but they weren't equipped for it...

For those who are unfamiliar with dugongs, they should know they are mammals who are similar to manatees. While they might look the same, they are a bit different. Nonetheless, we can all agree they're all cute, especially when they're babies!

As previously mentioned, a group of fishermen spotted a baby dugong on the beach. They wanted to lend a helping hand, but because they didn't have the tools and experience, they decided to call a special organization that rescues wild animals.

The animal organization sent a special rescue team to the small Thai village so that they could find and check out the tiny mammal. They came prepared with everything, from food to treatments, in case the baby dugong was injured...

Baby dugongs are rarely spotted without their mother and the animal rescuers made sure to bring some milk with them. They knew that if the mamma dugong was not around, then the baby dugong was surely starving.

As you can imagine, the baby dugong was scared when it first saw the rescuers. Fortunately, the rescuers didn't give up on the animal and they slowly started earning its trust. The next photos show how cute the baby is!

It didn't take long for the baby dugong to grow attached to his new human friends. After all, the rescuers were feeding the animal with healthy milk giving it comfort.

This rescue mission made headlines all throughout Thailand and it was closely documented. Dugongs don't usually come this close to the shores of populated beaches and seeing a baby dugong instead of an adult one is even rarer.

11. Growing Attached To The Rescuers

One of the most amazing things to happen is that the baby dugong grew attached to its new friends. He saw them as adoptive parents and it would get really happy when they came to visit.

Taking care of a baby dugong is not as simple as it might sound. The rescuers had to hand feed the little animal but luckily, the baby dugong loved eating seaweed and it didn't try to bite off the fingers of the rescuers.

The rescuers are saying that they will need to keep taking care of the baby dugong for the year to come. The animal needs to grow bigger before it can start swimming towards the deep waters.

As previously mentioned, the baby dugong's favorite snacks are seaweeds. This is why the rescuers made sure to pack at least two bags of seaweed whenever they came to visit.

We have to give praise to the rescuers who spend all their free time tending to the poor baby dugong's needs. They are good people and there is no doubt about that.

6. Learning How to Swim

The rescuers didn't just feed the baby dugong, they also taught it how to swim. One of the rescuers got dressed in a full diver suit and he would go beneath the waves and show the baby dugong how to move. Isn't that amazing?

What's great about this story is that the baby dugong is super friendly. It never tried to run away from the rescuers and it understood right from the start that they are there to help.

Since dugong sightings are so rare, it shouldn't come as a surprise to find out that this little fella became a local star. Tens of people from nearby cities come to visit every other day.

A couple of weeks have passed since the rescuers started taking care of Marina and the baby dugong is already getting stronger. It won't be long until Marina begins to swim away.

We are glad to let everyone know that while this story has a happy ending. Marina was lucky to be spotted by the fishermen and to find a group of rescuers who would put it all on the line in order lend a helping hand.