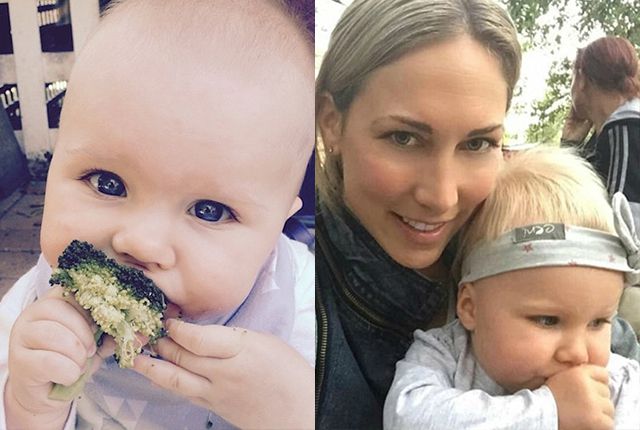 Shannon Cooper is trying to prove you can give your child an early start to a healthy diet. That's why her baby has been on the paleo diet since birth...

Shannon Cooper enrolled her daughter, Grace, in school like any other mom would with her kid. But Grace wasn’t like the other girls. In fact, she had an unusual upbringing from the moment she was born.

[dx_custom_adunit desktop_id="RTK_K67O" mobile_id="RTK_5yk0"] Cooper adopted the paleo diet way before she had given birth to Grace. Today, she uses social media to show people how to whip up sweet treats like sugar-free lemon bliss balls and raspberry chocolate-chip blondies. And they look as scrumptious as their sugar-packed counterparts.

For Cooper, living with food allergies had become a part of her normal life. She told Daily Mail Australia, “I just got sick of not feeling great.” One day, she decided she’d had enough.

The first thing she did was to cut out gluten, dairy and processed foods from her diet, and that included sugars. It was a huge change, but it was one that she felt was necessary for her overall well-being.

[dx_custom_adunit desktop_id="RTK_K67O" mobile_id="RTK_5yk0"] The paleo diet came into existence in the 1970s, and those on it have to change their diets to include things like fish, meat, nuts, seeds, fruits and veggies, while getting rid of grains, legumes and dairy. But some folks believe our ancestors did in fact eat carbs.

Since the paleo diet had worked so well for Cooper, she put her daughter on the same diet after she was born. There was just one problem: The diet was never tested on children.

Although people in general weren’t happy with Cooper’s decision, she didn’t care. She was confident in her choice to put her daughter, Grace, on the paleo diet, and nothing would deter her.

[dx_custom_adunit desktop_id="RTK_K67O" mobile_id="RTK_5yk0"] Even though you are eliminating certain foods from your diet, going on a paleo diet doesn’t mean you’ll deprive yourself from some delicious treats. Cooper often posts yummy snacks she sweetens with alternative options such as stevia and honey.

Since Grace was born, she has been raised on the same diet as her mom. Imagine a baby who has never in her life touched sugar. It sounds almost unbelievable, but it’s true. And yet her mom’s unconventional decision raised a lot of eyebrows. So how is the baby doing today?

Grace enjoyed a natural diet that was free of processed ingredients, and Cooper never thought that this was unusual in any way. And when other parents saw how Grace looked, they questioned everything. So did Cooper’s doctor.

[dx_custom_adunit desktop_id="RTK_K67O" mobile_id="RTK_5yk0"] When Grace’s pediatrician told Cooper that she had to breastfeed her paleo baby twice a day to give her more nutrients, she did it for her baby’s sake. But there was one choice from which she wouldn’t back down.

Say 'No' to Sugar

Too much sugar can cause liver damage, rot your teeth, increase your chances of developing diabetes, and even cause a number of cancers to develop. But the paleo diet reduces those risks by cutting out sugar. So Cooper simply felt like she wanted to stay as far away from it as possible. And that included her baby.

Some folks might feel that Cooper’s methods are extremely unorthodox, but she has a degree in agricultural science, and she’s pretty knowledgeable when it comes to living healthy and eating right.

[dx_custom_adunit desktop_id="RTK_K67O" mobile_id="RTK_5yk0"] Cooper wrote an e-book full of healthy recipes, and she has a website called “My Food Religion,” just like her Instagram. So it seemed like she knew how to keep Grace healthy. Then this happened...

Grace was 8 months old when her parents’ marriage fell apart. Cooper had a mortgage and no steady money coming in. So she feared she wouldn’t be able to keep Grace on the relatively expensive paleo diet.

But Cooper used her health knowledge to help her business thrive, and it paid off. In her blog, she wrote, “It has created avenues for my business that would have never been possible had I stayed where things were ‘comfortable.’”

[dx_custom_adunit desktop_id="RTK_K67O" mobile_id="RTK_5yk0"] As Grace got older, she started eating a few eggs in coconut oil for breakfast. And for lunch, Cooper fed her organic roasted chicken, as well as steamed vegetables left over from the night before. But what about dinner?

Dinners for Grace usually consist of spaghetti Bolognese made with zucchini noodles. It’s also accompanied with organic beef and organic tomato sauce. But there are no traditional desserts, because, hello: sugar! But Cooper does know how to pull off some amazing paleo-approved snacks. So what are the benefits?

Cooper claims that the paleo diet has strengthened her daughter’s immune system and kept her from catching typical diseases from other children who eat a more typical diet and tend to be walking pathogens.

[dx_custom_adunit desktop_id="RTK_K67O" mobile_id="RTK_5yk0"] Cooper told Daily Mail Australia, "She spends a lot of time around other kids who are sick all the time — who have snotty noses, coughs, colds — but she just doesn’t pick it up." But will Grace stay on this diet forever?

Cooper knows that a restrictive diet won’t prevent her paleo diet baby from being exposed to sugary foods, like when she gets invited to birthday parties. But she’s not exactly worried about that. Why?

Cooper told Daily Mail Australia, “I’m not going to not let her go to kids’ parties.” Cooper feels that if she comes home from a party after indulging on too much sugar, she can easily tell her to cut back next time.

[dx_custom_adunit desktop_id="RTK_K67O" mobile_id="RTK_5yk0"] There are special circumstances where she breaks the rules. She told Daily Mail Australia, “When I go out to dinner with friends, I’m just going to eat what’s on the menu.” But not everyone feels she’s on the right path.

The Skeptics Weight In

Dietician Dr. Rosemary Stanton told Daily Mail Australia, “Depriving her child of grains and legumes will make it much more difficult to achieve a balanced diet.” But Cooper has her own philosophy about food and nutrition.

Despite what the naysayers claim, Cooper stands by her decision to keep her daughter on what she considers a healthy diet. And apparently it’s working, because Grace is a healthy and adorable child who seems to be doing just fine.  “Why eating real food is such a scandalous topic is just bizarre,” Cooper said.