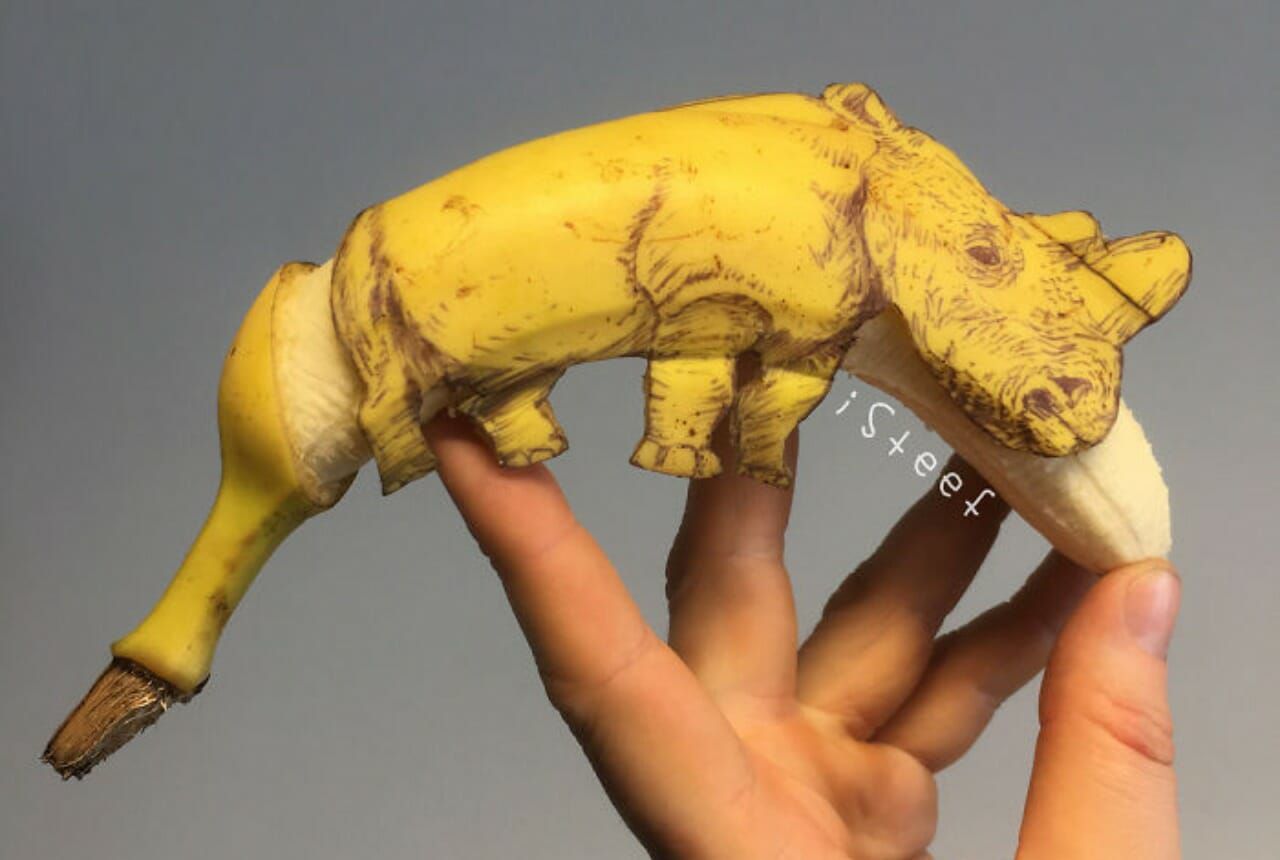 The virality of hands-and-pans pancake art videos died down back in 2016. And there was a hole in the internet foodie culture that needed something or someone to fill it. But thanks to banana artist Stephan Brusche of Rotterdam, the Netherlands, bananas are soon to become the next trend in food art. Using both ink and precise carving skills, Brusche creates undeniable masterpieces. And he does it using nothing more than standard, grocery-store bananas as his canvas. So check out Brusche's fire Instagram feed. His creations mean you'll never look at a banana the same way. We promise.

Based in Rotterdam, the Netherlands, artist Stephan Brusche views bananas as the perfect medium to create intricate works of art. On his personal website, Brusche reveals that his one-time side project has now evolved into a viable, unique career. "I draw on bananas," writes Brusche. "Sometimes to create stand-out social media posts & stories. Other times to give a live performance during events and trade shows. I'm also available for banana art workshops."

The Start Of Something Big

Brusche's work with bananas started as a way to simply test out the latest batch of Instagram filters."I wanted to test out Instagram filters when I was at the office," the Netherlands-based artist admitted to Chiquita. "There wasn't nice scenery or anything fun to draw or take a picture of but I did have a banana from lunch...so I figured, what if I drew a happy little face on it?"

Brusche isn't banana-crazy for no reason--the artist has a certain fondness for both the texture of the fruit's peel and its multi-dimensional capability. "The texture of the peel and the pen is really smooth," he said. "It has a pretty tough peel, so when I cut it, there is enoug thickness to give it a 3-D effect. And I think the shape of the banana is more original because most fruit is just round."

If you're wondering what happens to the bananas when Brusche is finished creating his masterpieces, don't worry--you're not alone. For the artist behind the #FruitDoodle craze sweeping Instagram, parting with his work is actually not such sweet sorrow. "When I don't eat them right away once I have good picture I let them be a bit and then throw them away later on," he said. "For me, the final product is the picture."

If At First You Don't Succeed

While some may scoff at the notion of deconstructing fruit for an art piece, Brusche is drawn to the forgiving nature of his chosen canvas. What started as a massive fail ended up snagging the title of Brusche's favorite creation--a fish bone mind-bender that will have you checking your produce drawer to see if your bunch of bananas grew gills overnight. "That one failure brought me to an all new way of working with the banana and actually defined my style, cutting away pieces of the peel to create a 3-D effect that has made me stand out between all the other banana artists," he said.

An Artist At Work

For a glimpse into Brusche's unique process, take a peek at this short clip that shows the Instagram artist turning an ordinary piece of fruit into a tropical paradise. Using a sharpened X-ACTO knife, a ballpoint pen and tiny paint brushes, Brusche effortlessly created a seaside scene that will have you yearning for a warm summer breeze. I can't help but wonder if Brusche has a deal with Chiquita similar to what Wiz Khalifa has with his weed man.

Can't figure out how Brusche can look at a piece of fruit and feel the urge to pick up his pen? According to him, all it takes is a trip to the supermarket. "Occasionally I can walk through the supermarket and see a particular banana and just get inspired by the shape," he admitted. "But mostly I'm thinking about designs when I get to work and I have a little notebook so I scribble down the ideas."

As you continue scrolling through Brusche's Insta feed, one thing becomes abundantly clear-- this guy is way more talented than even the painting elephant that went viral back in 2014. While you're busy putting the pieces of your blown-out mind back togther, the 39-year-old artist supporting the sudden draw-on-your-fruit craze is simply doing what makes him happy. "They show the things I care about or like the most," he said of his banana creations.

If you're like me, you only can stomach a banana when it's blended with a disgusting amount of chocolate and peanut butter. However, Brusche can't get enough of the fruit--as both a medium for his work and as a tasty treat. "When I walk to the subway, I always eat one banana," he said. "So [I buy] at least seven, maybe ten a week."

Not The Only One

Believe it or not, Stephan Brusche isn't the only banana artist flexin' his work for the Gram. Japanese artist Akai Inazuma successfully put himself on some serious next level shit when he began actually carving banana mush into sculptures that resemble IRL photos. With a growing market for the avant-garde pieces on Instagram, we're guessing it's only a matter of time before someone figures out how to carve out a pomegranate.