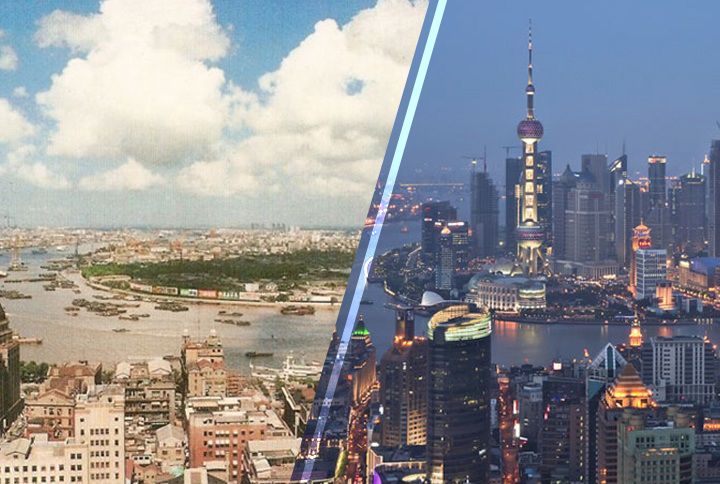 There’s no pause button in this little game called life. So, time marches on. Fashion styles come and go. It’s as if our planet is in a state of constant flux. But these before and after images of the world prove that we’ve made a lot of progress in a short amount of time.

In 1915, an accidental fire burned the Moulin Rouge Cinema to the ground. But like a phoenix, it rose from the ashes, after it was rebuilt, of course. But despite its modern makeover it retained some original features like the windmill.

It’s one of the largest mosques in India and it can accommodate up to 25,000 people. It was originally built in 1644 and remains in pristine condition, despite the fact that it was attacked more than once.

The thrilling ride was created more than 90 years ago in Coney Island. It was made entirely of wood. And while there are plenty of other modern roller coaster rides, it’s still a hit among guests.

Some before and after images of the world can be a little startling. The Chaney glaciers are no longer melting and reforming because of global warming. But it’s still a spectacular sight to see.

Dirt roads, no cars, no traffic, now those were the days! It's incredible to see how much things have changed! But the buildings haven’t really evolved that much in 142 years. But now the roads are packed, and modern cars are parked in front of businesses. Now that’s progress!

In less than 20 years, the Marunouchi business district underwent some serious renovation until 2013. Today, the area looks more like a city far in the distant future. Now it’s a far cry from the way it looked in 1997.

Chicago is the reported birthplace of the Home Insurance Building, aka the “Father of the Skyscraper”. It was built in the late 1800s. Today, the 10-story building isn’t as breathtaking as the 100-plus high-rises that make the Chicago skyline so impressive.

The trapezoid maze looks like it came out of the pages of “Alice in Wonderland.” It’s 60 acres big and has been preserved since the 18th century. Which just comes to show you that the more things change, the more they stay the same.

The Eiffel Tower has attracted millions over the years, and as you can see, the building behind it has changed quite a bit. But if you look at the tower, you’ll notice there’s a metal gate underneath. So good luck cutting across the grass to get to the other side!

It’s the home of Pike Place Market, the oldest farmer’s market in the US. It gets over 10 million visitors annually, hence why it’s the 33rd most popular tourist attraction in the world.

In June 13, 1990 The Berlin Wall separating East and West Germany fell. 25 years after the fall, Associated Press photographer Markus Schreiber went back and took a photo in the same location to show the world how much things had changed.

It’s located in Piotrkowska Street and is considered a historical landmark, which would explain why it has remained untouched in several decades. You could very well say it’s pretty divine...if you’ll pardon the pun.

In the course of 125 years, trees were put in place, and the old dirt road was replaced by a paved street. But while horse-drawn carriages went the way of the dinosaur, some of the homes still look like they did way back when.

There were virtually no homes in Hammerfest in 1889. But today, it’s the administrative center in Finnmark County. And, there are houses that look like tiny little boxes on the hillside, decorating an already-beautiful scenery.

The Sultan Abdul Samad was once a lone building. But over the years, it got plenty of neighboring high-rise buildings in the background. However, it still manages to stand out. Just look at that beauty!

The Church of our Lady was destroyed during World War II. But somehow, the Martin Luther statue remained unharmed. Eventually, the ruins were cleared, and the structures around the statue were rebuilt.

Judging from the two photos, it’s pretty obvious that the Big Apple has grown exponentially. But the men remain fearless. About the only thing that’s changed is safety. Notice the helmet on the workers heads.

Osnabrück Central Railway Station in Germany from 1965 to 2015

The railway station didn’t have any issues with parking spaces, because there weren’t a lot of cars. But in the 2015 image, there are more cars and dozens of bikes parked closely to each other.

These photos were taken 127 years apart, but fortunately, human progress hasn’t done too much damage. The mountain and lakes still remain the same. The stones on the side of the road have barely changed. But there’s a road now and some folks making their way back home.

You might not be able to see the changes, but trust us, they’re there. Most of these buildings were practically destroyed during the war in the early 20th century. Whoever worked on the restoration deserves a lot of credit.

Horse Cart And Steam Locomotive in Mont Saint-Michel, France from 1908 to 2016

This impressive structure hasn’t changed much at all, and neither has its surroundings. But while horse-drawn carriages are no longer popular, you can actually travel to Mont-Saint-Michael on one.

Estadio Olímpico Universitario in Mexico City from 1952 to 2018

In 1952, it was considered the largest stadium in Mexico. Over the years, it’s been home to the Summer Olympics, Pan American games and so much more. But from the looks of it, it would also make a great NFL stadium.

Rarely do before and after photos of the world show progress in favor of the environment. But notice the buildings near the water in the before photo. Then look at the now photo. They’ve been replaced by a vast amount of beautiful trees. That's because those buildings were only there temporarily for the 1900s World’s Fair.

In only a few short years, Dubai went from a desert to the most popular Middle Eastern spot. There are a number of skyscrapers, and the city lights are breathtaking at night, making Dubai one of the most striking places to visit on the United Arab Emirates.

The before photo showed what the town of Pripyat looked like before the Chernobyl incident. After the massive nuclear meltdown, the area became a ghost town. Twenty years later, everything remains that same as it waits for everyone to return.