Sick Of Your Kids’ Dumb Movies? These Funny, Family-Friendly Movies On Netflix That Will Make Everyone Happy

Chima Simone
Sick Of Your Kids’ Dumb Movies? These Funny, Family-Friendly Movies On Netflix That Will Make Everyone Happy April 26, 2018 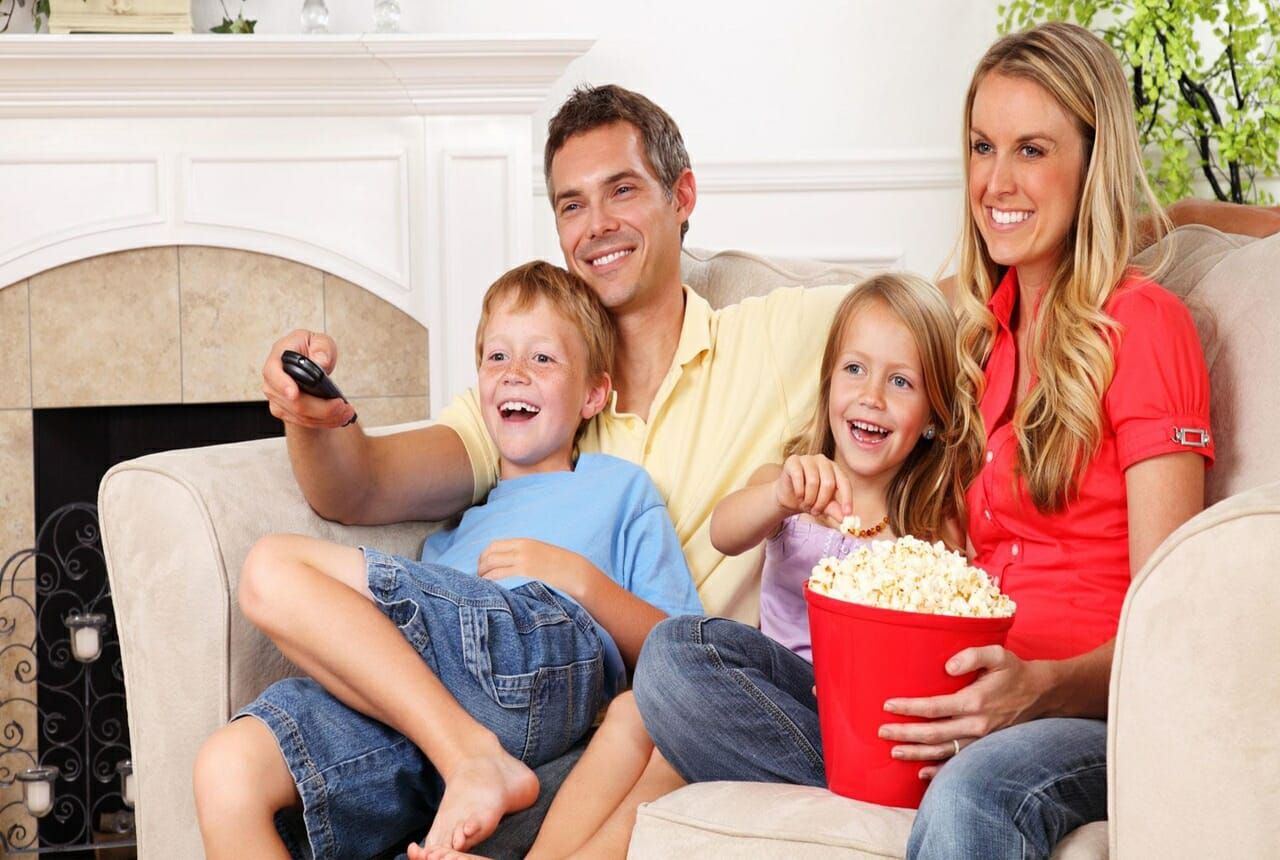 What are the best comedies on Netflix for the whole family?

Movie nights are a great way to chill with your family inexpensively in a relaxing environment. But getting everyone on the same page about what movie to watch can be a drag. So it's lucky for you we compiled this list of the best comedies on Netflix the whole family can enjoy. And no matter what your kids like, there's something here for them. But more importantly, you'll love these movies too. And you may recognize some of them from your own childhood and be eager to share them with your kids. But others may be brand new to all of you. Either way, you'll stop having to sit through stupid kiddie garbage, and they'll stop rolling their eyes at whatever ponderous grownup stuff you like. See? Everyone wins.

Finding Dory is a real winner, both as a sequel to the 2003 tear jerker Finding Nemo, but also as a stand alone film. Your kids will be delighted by all the colorful ocean creature shenanigans and your heart will be warmed by the story about belonging to a family even when you’re a little bit different.

Kung Fu Panda is a delight, truly a gosh darn delight from start to finish. It’s hard not to love the cuddly wanna be ninja voiced by Jack Black. His earnest and clear eyed belief in his ability to make his dreams a reality is inspirational, while the struggles he faces to get there are all too familiar. You will laugh, you will cry, you will cheer triumphantly… guys, I really love Kung Fu Panda.

Ok this one is definitely more of a heartwarmer than a straight up comedy but it has enough lighthearted chuckle inducing feel good moments that I think it deserves the title. The kids in this movie are phenomenal, precocious, and above all else natural actors who portray the bond between siblings with perfection. Perhaps your precious little brats will be inspired to get along with eachother more after watching how dedicated Pari is to getting her brothers eyesight back. Worth a shot, right?!

This charming claymation film from 2000 follows a group of chickens (and one dashing Rooster) as they attempt to avoid being turned into pot pies. If you’re the kind of person who enjoys looking for a deeper meaning in your child friendly films this will fit the bill because (and I hate to break this to you) it’s definitely a metaphor for the Holocaust BUT it’s also really very hilarious. How rare that a movie be both those things! It’s also super impressive to watch as an adult knowing how much intricate work goes into creating stop motion films. I say winner, winner, chicken dinner.

You’re gonna want to get annoyed with your kids for singing the songs from Sing constantly but that would be hypocritical of you because you’ll also be singing them at the top of your lungs 24/7. This movie is fun and sweet and chock-full of awesome music and if that’s not enough to get you on board there are many adorable animated pigs. Sounds like a winner, doesn’t it?

If you’re feeling like it’s time to introduce ‘questioning the nature of their reality’ to your children than obviously it’s time for The Truman Show. This, somehow quite funny movie, about a man whose entire life has been artificially constructed and filmed without his knowing is a philosophical minefield that is bound to leave you and your kids a little messed up. If that’s not successful family bonding, I don’t know what is.

This movie definitely doesn’t get the love is deserves but thanks to Netflix we all have a chance to right this wrong. Your kids will love it because it’s imaginative and adventurous and at one point an octopus gets shot out of a cannon so it can fight a T-rex. You’ll love it because it’s a Disney movie that you haven’t seen so many times you want to rip your eyes out at the very mention of it.

There are two kinds of families in this world, families who love Pee-wee Herman and families who don’t. I’m not gonna say that one of those families are wrong but I will say that one of those families is definitely more right than the other (it’s the ones who love Pee-wee, there I said it).  If you’re a Pee-wee loving clan you’re in luck because Netflix doesn’t just have the 1985 classic, it has three movies and the entirety of Pee-wee’s Playhouse. Can I get an amen?!

Look, John Goodman is a national treasure and his absolutely stunning portrayal of lovable oaf, Fred Flintstone, is certainly a testament to that. He’s backed up by an all star cast, including Rick Moranis, Rosie O'Donnell, Elizabeth Mitchell, and even Liz Taylor; not to mention a horde of incredible Jim Henson created prehistoric creatures. This movie is campy and ridiculous and sure to crack any kid up but it also tackles the trials and triumphs of marriage, parenthood, and adult friendship in a way that that proves these issues are truly timeless.

I’m not gonna say you’ll enjoy this movie because it’s actually good in any way but I will say that you’ll enjoy this movie because it stars universally adored (and rightfully so) American sweetheart, Hilary Duff. Your kids will love it because kids are pretty dumb and have trash taste about most things AND because they too will be swept up in the wonder of Hilary Duff’s unassuming charm and beauty. She’s irresistible, don’t try to fight it.

It doesn’t have to be December to enjoy this fantastically funny old school movie musical starring irresistible crooner, Bing Crosby, and comedy king, Danny Kaye. Start showing it to your kids as young as possible and they’ll be swept off their feet AND it will allow you the option of taking a very long nap whenever it’s on. Seriously this movie is soooooo long but it is also magical and full of gorgeous music.  Get on it.

This is definitely a PG-13 situation but if you have kids who are getting to be that age this is a super fun movie that is hard not to love. You may have to have a chat with your kids about some not so nice language that probably wouldn’t fly these days but the movie also addresses issues that are still totally relevant and important to be aware of, like cultural appropriation. Fun for the whole family! No, but really, I don’t know anyone who doesn’t love this movie.

This 1995 gem is about a little ghost boy who falls in love with the daughter of a paranormal therapist. For tender hearted youngsters out there Casper combines just the right amount of sweet first love romance and pre teen ghost angst. For kids who are more drawn to fart jokes, the three troublemaking ghost uncles will be right up their alley. Why will adults love it? Bill Pullman. Christina Ricci. Need I say more?

April And The Extraordinary World

If you’re getting tired of the garish and visually overwhelming tendencies of the American animation your kids are constantly demanding you watch with them, look no further than this gorgeous and sophisticated movie based on the work of French cartoonist Jacques Tardi. Yeah that’s right, this shit is classy. This is another movie that feels like way more than a comedy but there’s so much about it that will make you laugh. Most importantly there is a talking cat companion whose non stop sassiness will make you pee yourself a little. CLASSY!

In retrospect Rugrats was an insanely good show and no child should have to grow up unexposed to its genius. The Rugrats Movie totally lives up to the cleverness of the show and it addresses an issue many families have to face, a new baby in the house screwing up previously cemented family dynamics. Ugh, who invited that kid, amiright?! Whether you liked Rugrats or not when it was on TV you have to give this movie a shot, it’s gonna resonate with you in a brand new way as an adult while never failing to entertain.

Who you gonna call? The whole neighborhood over to watch Ghostbusters, that’s who (Netflix even has Ghostbusters 2 if you want to keep the party going). I doubt I have to sell you on how great Ghostbusters is unless you’ve been living under a rock for the last 35 years but just in case OH MY GOSH GHOSTBUSTERS IS THE BEST and you should be overjoyed to share the glory of this wonderfest with a new generation.

If you’re musical theater inclined you probably remember the filmed stage productions of Sondheim’s Into the Woods and Sunday in the Park With George that aired on PBS in the 90s. While those shows are fantastic they can be daunting and dry for young viewers which is certainly not the case with Shrek The Musical which is fast paced, humorous, high energy, and full of catchy songs. This show really is fun for the whole family and you can’t beat exposing your kids to the culture of live theater without having to pay hundreds of dollars for tickets.

Will Smith and Tommy Lee Jones are both absolute perfection in this buddy cop/alien hunter romp that totally holds up today despite being twenty one, yes twenty one, years old. And it’s not just the comedy that holds up; because so much of this movie relies on puppets and animatronics instead of cringeworthy 1997 CGI even your Generation Z kids, who spend like 97% of their life in crisp and clear virtual reality fighting robots (that’s definitely what kids do these days), will think it looks good.

Objectively the greatest movie ever made, The Little Rascals follows a group of precocious preschoolers through heartbreak, sabotage, tragedy, and go-cart racing.  Your kids will love all the madcap chase montages and silly antics that this movie has to offer. And even though it stars a bunch of four year olds this movie is genuinely smart and funny enough to be enjoyed by adults. The movie is also riddled with cameos from 90s celebrities that you probably missed as a kid and are fun to see now.

Kill two birds with one stone here by introducing your kids to the majesty of ballroom dancing AND quirky Australian comedy at the same time. Does it get better than that? No, it doesn’t. This movie is about important things like following your heart and dancing to the beat of your own drum, things I hope your kids are inspired by. Though ideally they will not be so inspired that they want to actually take up ballroom dancing because that is an expensive hobby that I will not be held accountable for.