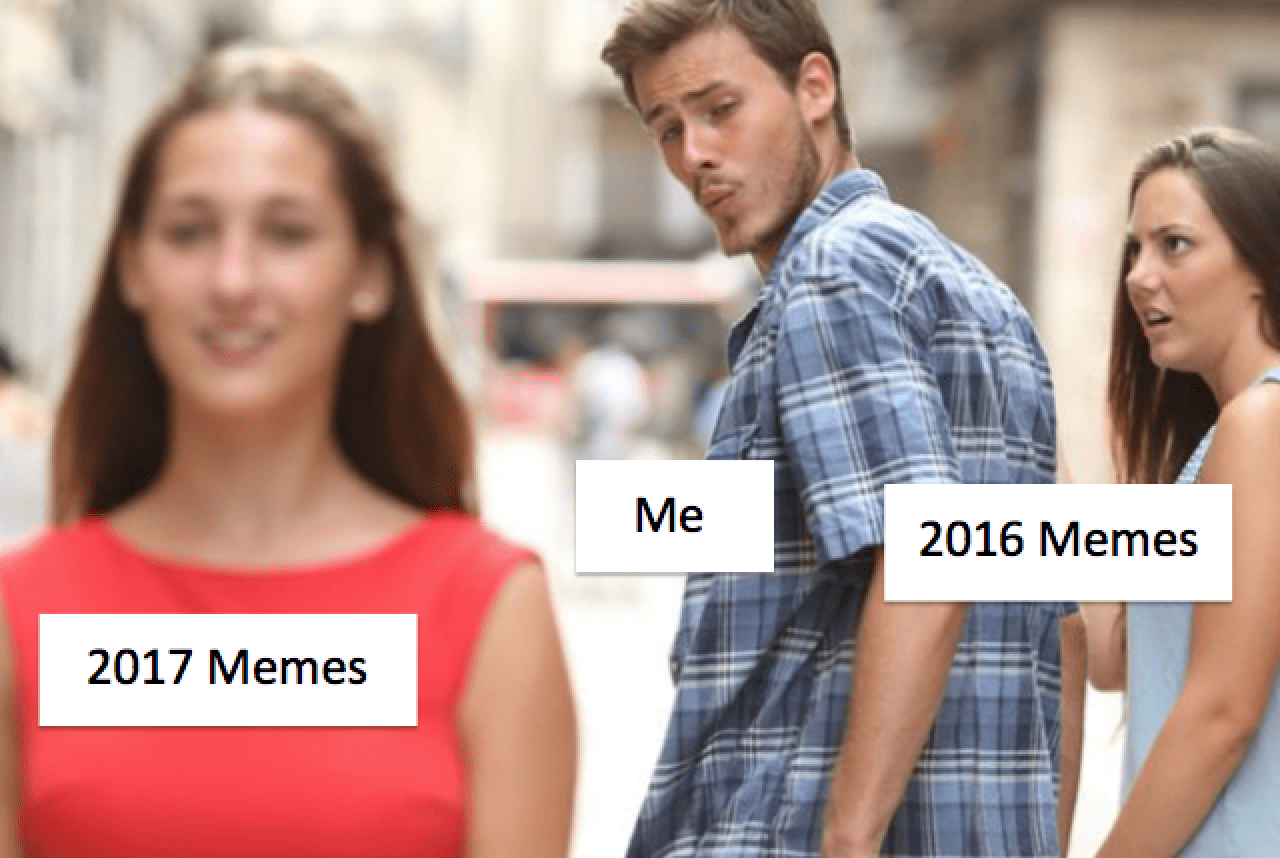 This was a great year for memes. And most of them have become completely ingrained in our collective consciousness. They're so fundamental to our culture, that it's crazy to think about how new they are. Because they're part of us now. They're in our DNA. So let's review. Here are the best memes of 2017.

A Turkish chef posted this video of himself cutting up cutting a huge steak then salting it in a really interesting fashion. Then a woman on Twitter re-posted it saying "this is #saltbae," then the reposts and memes did their thing and now he gets recognized everywhere and his Instagram is amazing.

Danielle Bregoli, AKA the Cash Me Ousside Girl, AKA Bhad Bhabie, is one of those human monsters that goes on Dr. Phil and has that "I DO WHAT I WANT" attitude the whole time. Well this one clip was so atrocious that it made national news once the Internet got ahold of it. She's a millionaire now.

I Bet There Will Be Flying Cars In The Future

Starting on Reddit, there are a whole bunch of these flying around basically shaming our modern world for the seemingly unnecessary bullsh*t we put out every day. They're usually scathing, hilarious, and make you realize that everything around you is ridiculous.

Starting off the year right after #SaveMelania, the cast of Stranger Things won a well-deserved SAG Award. David Harbour's speech was batsh*t insane. Then Winona's face during it shows her going through about 10 different extreme emotions. The Internet rejoiced and screencapped the whole thing.

So the Trash Dove was a bird put out by Facebook as a sticker and it quickly caught fire after it went viral in Thailand. It went nuts for like a week, then was gone. There's a video of people reactint to Trash Doves. The original is fantastic.

The end of the 2017 Oscars was a sh*tshow. Warren Beatty called out the wrong Best Picture winner. Which, oof. So people went to Twitter with photoshop in hand to make fun of everyone involved. Steve Harvey (having just made the same mistake hosting a pageant).

Thank god nobody has to like this song after this year. It was basically juge a huge song with literally over 5 billion views on YouTube alone, not including debuting at #1. It was Rebeccca Black big. Even the YouTube parodies got over 20 million views. This is a Sesame Street parody.

This is a sketch that people took seriously when the character is actually parody. YouTuber CharlieSloth made a video where character MC Quakez starts spittin some real silly rhymes at 12:15. He says "The ting goes" then makes the weirdest noises. Then Twitter/Instagram made the verse a punchline.

This is a meme that is usually used to outline for increasingly intelligent ways of thinking. Eventually, though, it became mostly ironic where people were posting the last picture of the fully expanded brain as the dumbest things people could possibly say. It's used a lot in Internet arguments.

When Donald Trump signed his first order as president he showed it to the camera like a fifth grader, so naturally everyone photoshopped different stuff in there. Dickbutts, penises, squiggly lines that look like a child made them. All the appropriate stuff for this event.

"To Be Fair, You Have To Have A Very High IQ To Understand Rick And Morty

Listen, Rick and Morty is an amazing show. But their fans are just the worst. Me included. A Redditor posted a long message that was super conescending. It's the picture included. It then became a copypasta that is used in 4chan for everything and around Reddit to make fun of people.

4chan's /pol/ board regularly uses this photo and phrase to say and celebrate all the horrible things that have come with Trump's presidency, according to them. It gets pretty brutal and this picture sums it up well. And that's all ya need cause you don't really want to go to 4chan.

The meme is relatively self-explanatory. You have something you're supposed to be loyal to as the blue girl, and what you actually want as what he's really looking at. It then spread like you'd expect: everyone used it with different scenarios, and there's even a iStock story of it.

The Sad Taylor Swift meme includes three pictures of her noticing The Daily Mail's photographer near her, then she looks surprised, then she just kinda gives up and enjoys her sit. This is basically Sad Keanu, but there are people out there who wouldn't mind seeing her sad (not me Taylor I love you)

New Slang: You Are Fake News

In ridicule of Trump calling CNN fake news and doing so for many news outlets when everything they say is perfectly fine, people turned to Twitter and image macros to create a new use for the slang. If anything is blatantly true you can just end the argument by calling that person "fake news."

The 2017 total solar eclipse, the only one for a long time (unless you travel just a little), made headlines everywhere and spawned many Internet jokes. Photoshops of Trump staring directly at it, people trying to trick other people. Best part was these puppies.

To point out just how ridiulous Donald Trump is, Bernie Sanders brought a printed-out tweet to congress - which is pretty funny. And then, of course, people started putting everything from Awkward Ted Cruz tweets to dat boi pictures on the cardboard.

This is a meme started on Instagram by a man named @fijichecks. The order of the meme goes "something looking protective or sweet / something looking aggressive or mean / some conclusion unique to the character. The variations are huge and they are everywhere. This one is pretty hit or miss.

This Kid Who Got Roasted

This kid posted a picture of himself on Twitter with the caption "you know I had to do it to em" in 2014, it was just a Twitter pic. Then someone found it on Tumblr and posted another one with a different caption, then the M&M's one, and tens of thousands of tweets later the kid became a meme.

Just jokes galore. People really went to town on this movie. The subreddit /r/fellowkids did a great job of cataloging the worst promotions, photoshops, and quotes from the movie. It is the epitome of /r/fellowkids and everybody agreed/shared the love of hate for this piece of sh*t.