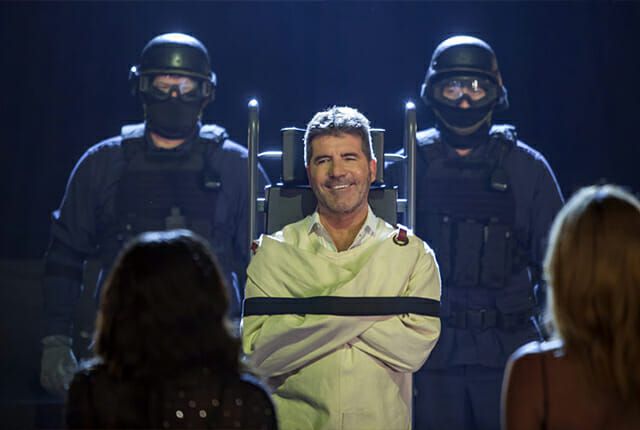 What are the best reality TV competitions?

Have you ever stumbled upon a reality show that is so addictive, you couldn't switch the channel? Maybe you heard about a couple of weird reality show competitions from your friends and family. After much soul searching, you decided to cave and start watching. After the first episode, you were unapologetically hooked. Whatever the case may be, you have plenty of reality shows to choose from. But as amusing as "Keeping Up With The Kardashians," and "Here Comes Honey Boo Boo" may be, there isn't an actual competition taking place. So, we take a look at the best reality TV competitions that actually take balls, strength and some major talent.

The SyFy cable series pits the best makeup artists against one another in order to create some creepy sci-fi-ish looks using prosthetics, makeup, costumes...and a s--- ton of talent. This competition is packed with unbelievable transformations, that you simply won't want to miss a single episode. While viewers don't get to participate, they can root for the ultimate look of their screams.

Paramount Network's reality competition allows tattoo lovers with unbelievable talent to show off their artistic skills while participating in a series of challenges with other artists. Naturally, they'll be judged for their work by reputable tatto artists, like Chris Nunez, and if they win they show, they could go home with a $100,000 prize. As a viewer, you'll love the mind-blowing tattoos so much, you might even consider getting one.

A panel of judges made up of food and wine gurus decide which chef will win the culinary challenges week after week. This show won us over with the word "food" because we get to see some impressive dishes that make our mouths water. We also get to jeer the competitors we don't like because, why not? It's reality TV, baby!

Ask anyone who's ever watched Hell's Kitchen and they'll tell you that they watch because they love seeing world-renowned British chef Gordon Ramsay chew out potential wannabe chefs. His wisecracks keep competitors on their toes as they strive to win the competition and become the head chef at one of Ramsay's Michelin-star restaurants.

As one of the most experienced drag queens, RuPaul mentors, befriends, and advises other drag queens competing to become America's next drag superstar. Creating some unbelievable makeup looks and outfits are just some of the obstacles that Ru's "girls" have to tackle on their journey to be crowned the winner. But most of us tune in because of the drama among the competitors. Admit it!

So You Think You Can Dance

Since 2005, dancers have wowed us on the dance floor as they showed off their skills in salsa, krumping, jive, hip-hop, ballet and ballroom dancing. Impressing the choreographers and the panel of judges like Nigel Lythgoe is not easy. And we personally love listening to Mary Murphy scream when she tells competitors they're on the hot tamale train.

The concept behind this competition is to find a brand-new singing sensation. The panel of judges only turn their chairs around if a contestant is able to wow them to their very core. Then the judges mentor the potential singers they've selected. Afterwards it'll be up to the public to call or text their vote to see which singer performed better. But there can only be one winner...even if you're rooting for every talented contestant on the show.

There are no actual shark tanks, but most contestants wish they could jump into one rather than face a strict panel of investors who will either like the business ideas they pitch...or totally hate them. You'll get a kick seeing one or more investors agree to put money into an idea, and see how it unfolds.

The weekly competition allows singers, comedians, dancers, and stuntmen to try to win over the audience, judges, and viewers. It's not easy being the best, that's for sure. There are a lot of duds mixed in with the good performers, and people get to vote to ensure that their favorite contestant stays safe and ultimately wins the $1 million cash prize.

You'll be on the edge of your seat, unlike the contestants on this show, who have to complete a bunch of challenging obstacle courses in order to beat out other competitors and make it to the next level. The obstacle courses are known as stages, and they get more and more difficult as they move forward. Your heart will race till the very end.

If you want to see a more mellow version of Gordon Ramsay, then this cooking competition should be on your bucket list. It pits talented chefs who are selected from a nationwide search. The goal is to beat out 50 potential competitors and become the best home cook in America using ingredients from well-stocked pantries in order to create the best dish.

As far as reality show competitions go, "The Amazing Race" is in a class of its own. Not only do we get to see teams of two compete in the ultimate race ever, but we get to virtually travel the world with them. Even those who lose are real winners because they get to visit countries that they might not have been able to see otherwise.

"The X Factor" allowed solo singing artists or groups to compete on stage in order to get as many votes as possible to win. Viewers voted by phone, text and by internet. The lucky winner earned a recording contract with Syco Music, which is Simon Cowell's record label. The show had three seasons and ended in 2013.

Contestants participated in a dog-eat-dog contest in order to become Donald Trump's apprentice. Now that's quite a challenge given that Trump, who is now the US president, had a lot of high expectations and was not an easy person to please. Think of it as the most stressful job interview ever, and the last words you want to hear are "You're fired!"

Are You Smarter Than A 5th Grader?

When reality show competitions ask you to outsmart a 5th grader, you might assume it'll be a piece of cake. But this quiz show had grownup contestants go head to head with fifth graders. The questions were taken from textbooks that ranged from first through fifth grade. As a viewer, it's hilarious, but would we want to compete against a 5th grader? Hell no!

To become a "Project Runway" winner, you have to know how to sow. But competitors also need to know a lot about fashion design in order to make the coolest clothes we've seen on TV. Time restrictions, personality conflicts, and drama in the work room make this one of the most unique reality show competitions on television.

In order to win this competition, you have to be hella funny. If you can't make people laugh, you'll be going home fast. The endgame of the program is to pick a single comedian from a group of potentials in order to win a cash prize and be deemed one of the funniest stand-up comedians of the season.

If you have Netflix then you have to binge watch this show. It's like "Ninja Warrior," but it's a lot more challenging since competitors from around the world try to master the obstacle course dubbed "The Beast." Expect to see a few scrapes, bruises, and falls which are funny to us because we're not the ones competing.

Each episode of Spike TV's reality series deals with a particular fitness category such as interval or circuit training. Three entrepreneurs have to come up with an exercise program that's innovative and better than their competitors' idea. Only the winner will have a workout movement that he or she created using their business skills.

Competitors get divided into four teams of four and led by a military vet in order to compete in a series of grueling obstacles. The elimination continues until a contestant fails to finish the challenge. Those who remain get to participate in the elimination challenge and the winner gets a cash prize of $250,000.

The reality competition, presented by Gabrielle Reece, consisted of 20 contestants (10 women and 10 men.) Trainers try to improve the physical and emotional fitness of the contestants using activities like mixed martial arts and boxing. In the end, two teams physically compete in the Elimination Tower with one of them taking home an amazing cash prize before the show ended in 2016.

Teams of five will test their strength by climbing ropes, crawling under barbed wires, and climbing a 45-degree inclined wall full of mud. Each team gets a Spartan athlete who will ride them hard in order to get them to make it through every obstacle. The endgame is to use teamwork to try and win the $250,000 cash prize.

Unlike some game shows, you had to work your butt off and be super athletic in order to survive a massive obstacle course, beat out other competitors and collect the cash prize. The show aired from 2008 to 2014, but boy did we laugh watching those contestants slip and fall while trying to achieve their endgame.

Cast members from shows like "The Real World," and "Road Rules," compete against each other in group challenged, but most of them are individual. They'll eat gross animal parts, race, and battle it out in a series of obstacles that are fueled by the rage and hatred some of the competitors have for one another.