Camila Villafane
Billionaire Tells a Homeless Man Three Words That Instantly Has Him in Tears November 19, 2019Leave a comment 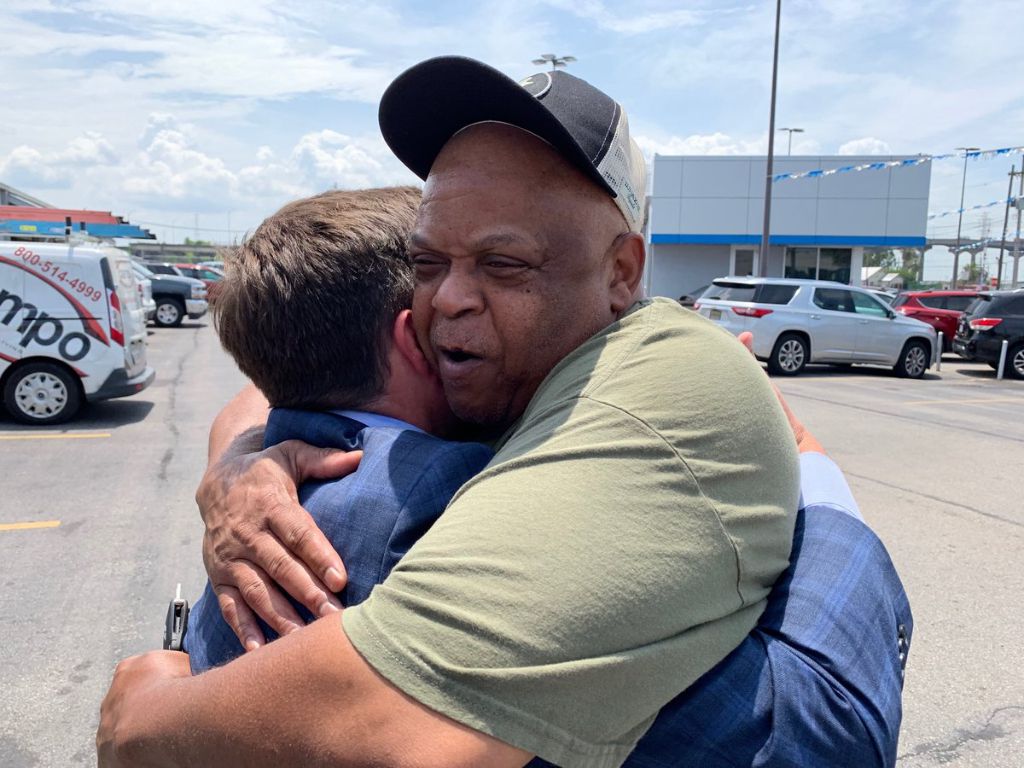 Imagine being down on your luck after protecting the nation from its enemies only to return home and wind up on the streets. This was Horace Scott’s sad reality. But then a philanthropist came into his life and offered him hope in the form of a gift and three words that brought the veteran to tears.

Life Was a Real Struggle for Him

Imagine being at a stage in your life where you should have a roof over your head, a family and a refrigerator full of food. Unfortunately, Horace Scott didn’t have any of that. But a few decades earlier, everyone called him a hero.

He Went from Hero to Zero

Life had taken a positive turn for Scott when he served in the United States Army from 1979 to 1982. But after retirement, he wound up homeless. For a while, the 59-year-old veteran struggled to survive, not realizing a savior would walk into his life.

His Days Had Become Repetitive

For Scott, life had become monotonous in New Orleans, Louisiana. He dealt with the same people and spent money on the same basic necessities. Every day was exactly the same. Although he was retired, he was still a fighter at heart.

He Was Saving for a Place to Live

Scott was down, but he wasn’t out. He started two jobs to save up enough money to move to a new apartment. But he had one necessary expenditure that was hemorrhaging what little money he had. Was it some sort of vice?

It wasn’t alcohol or controlled substances that drained his finances. It was something we take for granted every day— transportation! By paying to get to his two jobs, he ended up nearly penniless. But would human kindness be the key to his salvation?

There Are Good People in the World

When someone like Scott makes it in the news, people start to lose faith in humanity. How could anyone allow a veteran to wind up on the streets? But there are good people left in the world. And there was one person out there who was about to change his life.

A Philanthropist Threw Him a Lifeline

The world is full of all kinds of people. Thankfully, there are some with open, caring hearts and wallets that can buy a small island. One such person just so happened to be a philanthropist named Bill Pulte. But how was he able to change Scott’s life so quickly?

He Urged Americans to be Generous

Pulte is a CEO of a highly successful financial corporation called the PulteGroup. And unlike some billionaires, he actually goes around trying to inspire the average American to be kind and generous. His actions put him on the map for being one of the kindest rich guys ever.

He Dared the President to Help

One night, Pulte went on Twitter and tweeted: “If @realDonaldTrump retweets this, my team and I will give two beautiful cars to two beautiful veterans.” But would the president respond to this nonpartisan billionaire’s request?

The President Wrote Back

Two hours later, President Trump retweeted Pulte’s tweet and wrote: “Thank you Bill, say hello to our GREAT VETERANS!” But was Pulte surprised by the president’s quick retweet or his response? Not at all. And there’s a reason for that.

He Punched a Hole in Philanthropy

Gretchen Smith, an Air Force veteran who founded Code of Vets, a non-profit group, found Scott in a housing shelter and enlightened Pulte with his dire situation. The billionaire could have simply written a check and sent it. But he did something even better.

Pulte was so motivated to help Scott out that he flew 1,000 miles from Detroit, Michigan to New Orleans, Louisiana to change this homeless man’s life. But Pulte had no idea the profound impact his words would make.

Scott Was Tricked Into Meeting Him

Scott’s monotonous routine was temporarily broken by Smith, who brought him to a post office parking lot across from a dealership. But he had no idea what he was doing there. Then Pulte showed up and uttered the words that would change Scott’s life forever.

Scott was stunned. He didn’t get it at first. He had walked into the parking lot on that day, not expecting anything to change. Then Pulte handed him the keys to his brand-new car and simply told him, “Here’s your car!” But Scott’s reaction was priceless.

Scott Was at a Loss for Words

Scott was so overwhelmed by Pulte’s generosity that he cried and yelled, “Get outta here! Oh, man. What? Oh, man, I'm ecstatic!" Then he added, "I don't have words right now. This is heaven-sent." But Pulte had one more thing to do before he left.

The Philanthropist Inspired the Crowd

Pulte then turned to the crowd that had gathered there and said, “We care a lot about our veterans. Veterans are special people. They fought these wars for us. They come back and sometimes aren’t recognized for that.” While his words resonated with the crowd, the vehicle didn’t belong to Scott. Not yet, at least.

The Car Would Open New Doors

The vehicle meant the world to Scott. It was air-conditioned, too. He never imagined he would ever own something this luxurious in his life. But this wasn’t just for joy riding. It was going to open so many new doors for him.

He Could Finally Save for a Place

Scott would no longer have to spend his hard-earned money on transportation, which meant he could finally start saving for a new place. Plus, the vehicle would keep him moving every day and motivate him to show up to his jobs on time. But he had one more thing to do before the car was officially his.

With the keys in his hands, Scott got into his new car and drove across the road to sign the papers at the dealership, so he could officially seal the deal and become the owner of the car.

Philanthropist Made Him Promise

Pulte made Scott promise to always give a lift to a fellow veteran if he or she needed help going anywhere. And naturally, he agreed. So, in effect, it’s all about paying it forward. But what did the homeless veteran think about Trump’s retweet that led to Pulte’s generosity?

He Had a Message for Trump

Sitting in his car, Scott gave the president a powerful message: “Commanding officer, I want to thank you, sir, for honoring all vets. We really appreciate you.” But Pulte’s work is just beginning.

After helping Scott, Pulte’s Twitter followers grew up to half a million. The story had gone viral which prompted thousands of people to help others around the world with whatever resources they had. But did anyone listen?

Others Offered to Help

Pulte revealed that 600 people approached him to help chip in for Scott’s car. And several other billionaires reached out to him to change the lives of those who were underprivileged. But can the philanthropist convince a Kar-Jenner to join his crusade?

He Wants Kylie Jenner to Help

During an interview with DailyMailTV, Pulte stated that he hoped to convince Kylie Jenner to join the world of Twitter philanthropy. He hopes that her words of encouragement will inspire her followers to help others. In fact, he stared into the camera and addressed Kylie: “Please join Twitter philanthropy and help us spread love, kindness and generosity. It's a movement. We'd love to have you.”