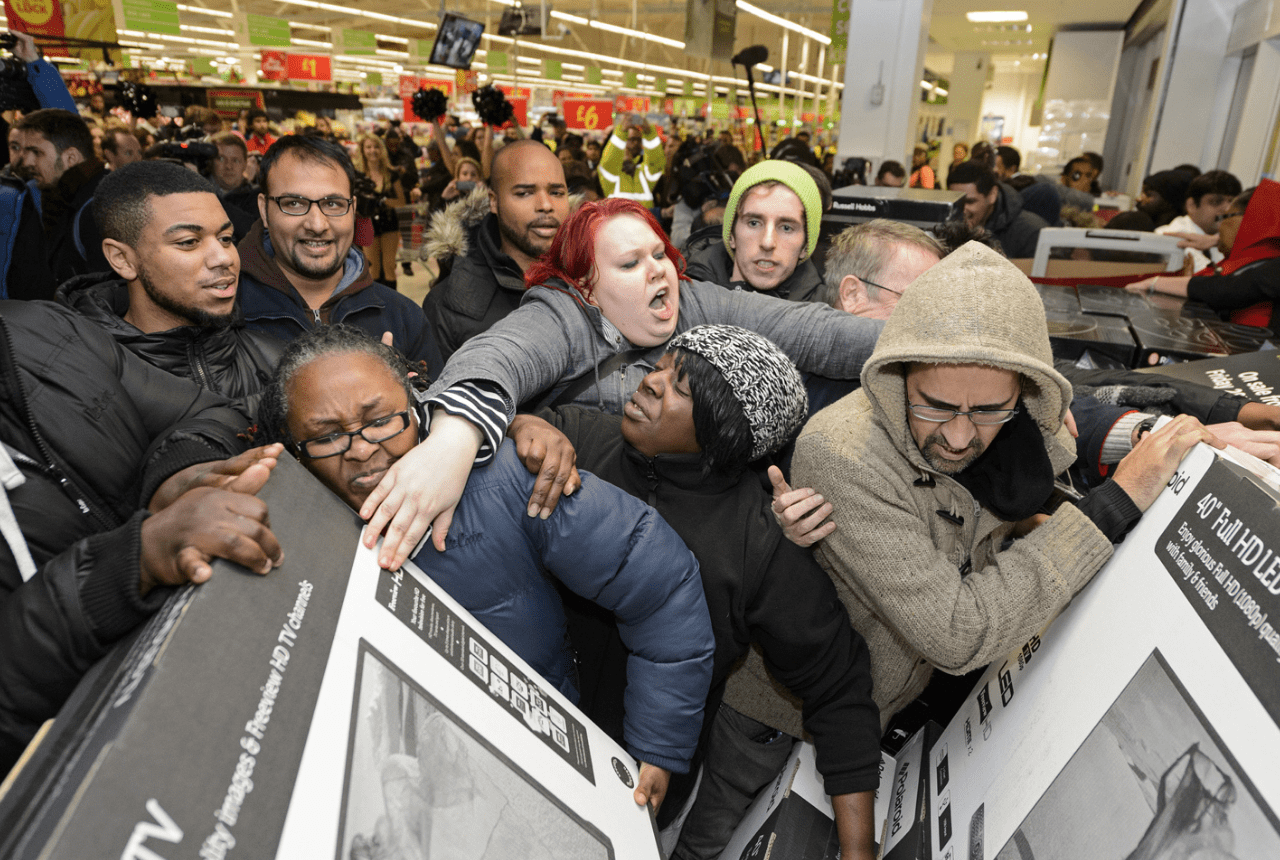 Black Friday horror stories really show you the absolute worst of humanity. People have not only died from being trampled in Black Friday stampedes, but thousands are injured every year, and it's all just to save a few bucks here and there. These are the worst first-hand accounts of Black Friday nightmare scenarios that the Internet has to offer (so far).

This Guy Pooped On The Floor

"A customer was having problems finding an associate to help them in the shoe department. So what did he do? Dropped his drawers in the middle of the shoe department and crapped all over the floor. Then another customer didn’t see the mess and stepped in it before it could be cleaned up."

The Security Guards Aren't Even Safe

"Someone punched a security guard in the face because he thought he was a customer skipping to the front of the line..he was just walking in the door to start his shift. So yeah, my town has those kind of people in it."

"On Black Friday a father had his daughter on his shoulders, and kept spinning her around. She said she didn't feel well and told him to stop...She started throwing up all over the jewelry stands. It caused a chain reaction, and in total, 12 people threw up all over the store. WORST. SMELL. EVER."

The Man Who Needed Milk Immediately

“Managing checklanes at Target today. Lines wrapped around entire store. Guy hands me gallon of milk saying “we’re not waiting in this line” and leaves with his two daughters. Who goes into Target on Black Friday at store open for a gallon of milk?”

"I once worked a Black Friday at TRU. A guest sprayed mace behind them as they ran in front of the pack towards the electronics section." —Vince Plowman, Facebook.

"I saw an elderly woman steal an ice cream maker out of a man in a wheelchair’s electric handicapped cart. He got a security guard, and she flat out denied it, saying the man was using his handicap to embarrass her. I lost a little faith in humanity in that moment."

"My first Black Friday, I was watching over the self checkout at my Super Target. When the doors opened, I saw a woman holding an infant child who couldn’t have been older than three months elbow a lady in the face for a cart even though there were more close by."

“I had an old lady take a dump in line, rather than lose her place. We had to shut down the line to clean it up. The 50 people behind her had to move to other lines after already waiting a half hour. I had to clean it up... The rush to the register when we reopened was horrific.”

The Shoe Department Is Dangerous

"I was assigned the shoe department. We didn’t have the size a lady was looking for so I offered to check our system for another store. She [shouted], 'I don’t have that kind of f***ing time!' and threw the shoe at me. She ended up hitting me in the mouth and splitting my lip. 'Tis the season."

"We were sold out of [a woman's] favorite holiday lotion. She started throwing those giant three-wick candles — she threw at least ten. Then she flipped a table filled with lotion and started stepping on the bottles. The store's floor was covered in lotion and broken glass!”

"A woman POOPED in a container full of miscellaneous cosmetics that was part of a makeup display so that she wouldn't have to lose her spot in the long winding line of check out. POOPED."

"I worked for M.A.C a great number of years, and during one particularly dark Black Friday I saw a coworker get spit on by a customer who was unhappy with how long she had been waiting to purchase a lipstick. SPIT ON. Let that sink in."

Bringing A Toy To A Knife Fight

"I work as a Deputy in the suburbs of a fairly large city. My very first Black Friday on the streets, I had to respond to a knife fight outside ToysRUs that started over line jumpers. Ugh, still makes me shudder. I hate knives."

"Back in my poor college days when I worked at walmart we had a fight break out over a bike. Fists were thrown and there was some blood. Eventually one guy got ahold of it and managed to get away from the crowd, he rode the bike out of the store to flee his pursuers (without paying)."

"I’ve seen a woman hit another woman in the chest with those toddler car boxes you drive in. Woman who got hit was a week or 3 post op of open heart surgery. Lots of blood. Right In front of me. No idea what happened to the woman who hit her. I do think she got the toy car purchased it and left."

"Someone pooped in the fitting rooms once. On purpose. Like, there was just a pile of solid turds on the carpet.”

"A fight between two women broke out and one woman flipped the other woman’s stroller with her baby in it over and, instead of helping her child, the mother tackled the other woman. The store manager had to pick her child up and make sure it wasn’t hurt. Turns out they knew each other."

"I got punched in the face because I didn't know what a zhu zhu pet (a robotic hamster toy) was."

Kids Poopin' In Line Because They Have Horrible Parents

"A little kid... [was] complaining about having to use the bathroom and the mom kept ignoring her. The daughter ended up peeing all over my station and the mom didn't say anything about it. She paid, grabbed her bags, and said that I should clean that up and just left." —Ashton David, Facebook

"Working in a Victoria's Secret Pink store one Black Friday, I was bending down to check on something for a customer and another used me as a step stool so that they could reach a pair of yoga pants on a top shelf."

"I watched a little old lady pepper spray someone over towels."

"I was working at Fry's Electronics and we opened at about 5:30 a.m.. We had this Mr. Coffee machine that was on sale for $3, and I witnessed one lady punch another lady in the face for our last non-reserved one." —Carla Catalan, Facebook

"A woman once threw shoes at me because they weren't on sale. Just threw spiked heels at me."

They Broke Through The Doors And Killed Someone

"I worked at the Walmart... in Valley Stream, Ny. Was working the day one of my fellow co workers got crushed to death by a large crowd who broke the doors and gate outside. That moment changed Black Friday for the retail world forever. I quit after that, was not ready to lose my life to some TVs."

"One year around 4 a.m. we had left a stock room unlocked in the rush, and upon return, we found out that someone decided to poop on the floor instead of using the bathroom that was less than 100 feet away."

When I worked at Sam's Club (a retail warehouse), during the madness one Black Friday morning, we caught a woman stuffing the inside of her [trousers] with frozen lobster tail. She would unpackage them and throw the trash in a stack of tyres that were on display,"

"I've only went once. I was punched once, pushed over 10 times, swore at multiple times, and spit on. I only went as a tag along with my ex. I didn't even buy anything."

Going Back To The Stone Age

“I worked for a golf superstore as a cashier. Black Friday customers come rushing in and the line starts. I proceed to scan the first item and nothing… the registers are completely down and the lines are growing fast. The only thing we could do is take every transaction manually. Write down SKU’s, calculate tax, and use the old credit card swipers for 3 hours. I never worked retail during Black Friday again.”