Jen Arbues
Abandoned Boat Washes Up on Irish Coastline With a Mysterious Message Inside October 23, 2018 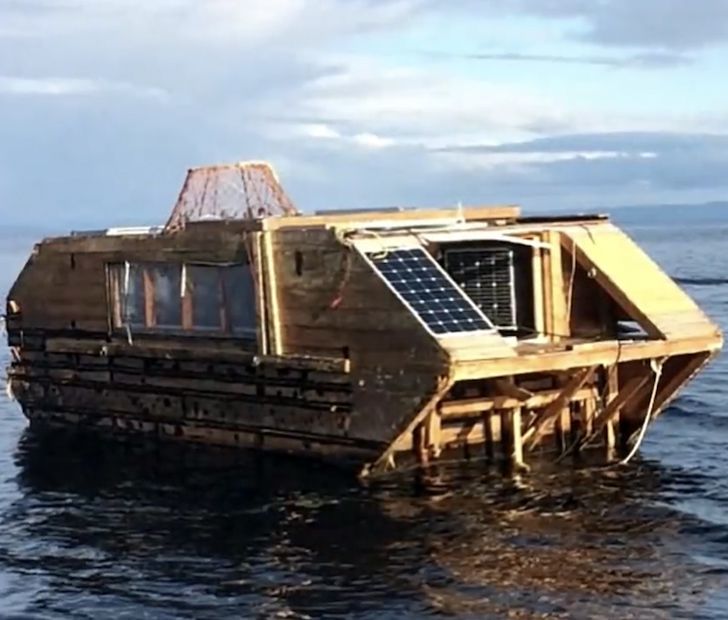 In the fall of 2016, residents of County Mayo, Ireland, experienced an interruption to their beach day. Because that's when they found a strange vessel floating aimlessly just offshore. And this mysterious boat washed up on the Irish coast carrying a strange secret. But what could the mysterious message found onboard mean?

“Plain of the Yew Trees”

Along the west coast of Ireland is the 2,157-square-mile county of Mayo. It’s the third-largest county in the entire country, and it’s known for both its extensive blanket mire as well as its limestone landscape.

Cross Beach, on the northwest coast of County Mayo, boasts one of the most picturesque landscapes in the entirety of the area. It’s also one of the longest beaches on the peninsula, with a combination of both rocky terrain and white sand.

In the fall of 2016, beachgoers noticed what would later be described as a “floating caravan” off the coast of Cross Beach. The craft was bobbing aimlessly in the water and seemed to have appeared out of nowhere.

County Mayo residents were concerned about the wellbeing of any possible passengers on board the floating caravan. So an emergency call was made, which resulted in a rescue mission by lifeboat and coast guard crews.

The fact that a boat had found its way to the County Mayo coastline on its own isn’t as crazy of an idea as it seems. Shipwrecks have been a fairly common occurrence in the area for years, though, especially on account of the stormy waters in the Atlantic.

The Ballyglass Coast Guard Unit quickly responded. They soon discovered that the vessel floating aimlessly offshore was, in fact, a solar-powered houseboat, which also appeared to be completely abandoned — at least, for the most part.

The First On Scene

Michael Hurst, the officer in charge with the Ballyglass Coast Guard Unit, was one of the first to arrive on the scene. “I didn't know what to think, I was just concerned about safety and securing it.”

“My main concern, when I did see it, was number one to actually secure the vessel so that it doesn't drift out and cause any dangers to other shipping,” Hurst went on to say. “And number two was to make sure there was actually nobody on board the vessel.”

Hurst, along with the other members of the Ballyglass Coast Guard Unit, were a bit taken aback by the boat. “The shape, itself, is very unusual, because of the size of it. I initially thought it might be a caravan.”

Removing It From the Water

The tricky part came when rescue crews had to figure out a way to actually get the houseboat ashore. What they finally wound up doing was securing it with rope and pulling it onto the beach.

Hurst described the 20-feet-by-10-feet-by-12-feet vessel as having been made from timber off-cuts, polystyrene, spray foam and Perspex windows with solar panels. But one question still remained: “Then I thought: where in the name of God did this come from and who built it?”

Inside the boat, a handwritten message was scrawled on one of its walls. “I, Rick Small, donate this structure to a homeless youth to give them a better life that Newfoundlanders choose not to do! No rent, no mortgage, no hydro.”

Who Is Rick Small?

Canadian eco-adventurer Rick Small had achieved a measure of fame some years back by riding over 4,300 miles across Canada on a three-wheeled bicycle powered by solar panels. And he had plans to do something bigger.

Rodney Mercer, a member of the Foxtrap Marina in Newfoundland, described Small as an advocate of “green self-sustaining” living. According to Mercer, “His goal was to cross the Atlantic in this self-sustainable boat, if you call it that.”

Having disassembled his bicycle for parts, Small began to collect lumber for his solar-powered houseboat. Timothy John Ewart, a resident of Conception Bay in Canada, saw the boat on a beach near his home and said, “The boats steering system was only a piece of plywood bolted to a PVC pipe. And the motors barely had enough power to move.”

And yet, the boat was found unmanned. “He had a clear idea what he was building and what he wanted to do. Surprised to see it set adrift with that note,” Mercer explained. “Something must have changed drastically for this to happen.”

A spokesman for the Canadian Coast Guard in Halifax shed a bit of light on the situation. “They said the owner was hoping to cross the Atlantic in it, but they managed to discourage him.”

According to the Halifax Coast Guard, Small’s houseboat was last seen earlier in the summer in Portugal Cove, Newfoundland, but managed to break loose. “The Halifax authorities were amazed it made it to Ireland and was in one piece.”

Better Than One Piece

Upon closer inspection, the houseboat seemed to be in better shape than it appeared to be from the outside. Although it had seen some rough ocean waters, the inside of the vessel remained fairly dry.

The interior of the houseboat when the Ballyglass Coast Guard took a look may have been a mess, but it wasn’t out of hand. Wires hung from the solar panels, debris had fallen from the shelves, and two truck tires were found that may have been used to protect the boat's sides when docked.

A Farther Trip Than Expected

In the note, however, Small’s plans were for the boat to go to the homeless youth of Newfoundland. According to Hurst, “The owner, my thinking, probably didn't expect it to make it as far across the Atlantic.”

No Word From Small

To date, no one has heard a word from Rick Small regarding the discovery of his solar houseboat and his strange note. But the folks in County Mayo are kind of hoping it will stay that way.

Once the boat was pulled from the water and investigated, it was turned over to Mayo County Council. And according to Hurst, a group that restores old buildings for tourism purposes has already been in contact about the houseboat.

The ultimate goal for the Irish locals is to have Small’s houseboat used as an attraction on the Wild Atlantic Way tourist route. “If it pans out this way, and if Rick Small doesn't actually require the vessel back, they may use it locally as a tourist attraction and restore it to the best of their ability,” Hurst says.

The abandoned houseboat isn’t the only strange thing that’s washed up on County Mayo’s shores in recent years. In June of 2016, an American tourist found a kilo of cocaine on a beach in the area, and a few months later, gear believed to have belonged to a couple of coast guards who had gone missing earlier in the year was discovered.