Harvey Shepherd
Bride Finds Out The Truth About Her Fiance On Their Wedding Day June 24, 2019Leave a comment 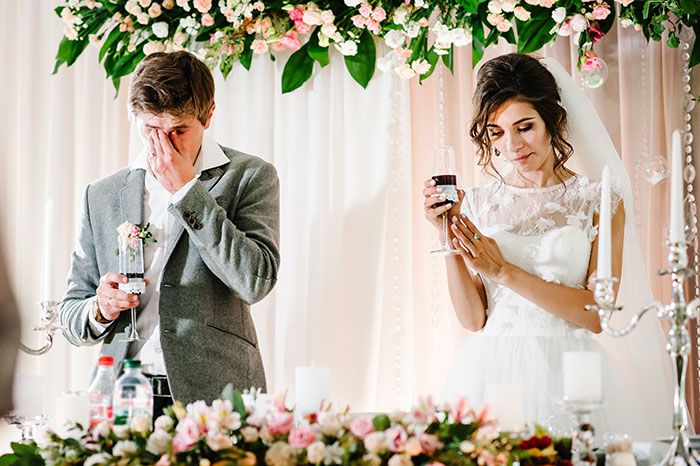 Casey was getting ready to marry the love of her life, Alex, but a text from a stranger revealed to her that the man who asked her to marry him is not who she really thought she is. The text revealed that Alex has been cheating on Casey for years and instead of canceling the wedding, the woman decided to get some sweet revenge in front of everyone.

The first thing that we want to mention is that the names of the bride and groom have been changed for obvious reason. Casey has been preparing for her big day for years and unfortunately, it didn't go as planned.

Casey and Alex invited hundreds of people to their wedding. They loved each other they wanted the entire world to know that. Sadly, Alex was lying all along.

Everything turned for the worse when Casey received a text from a stranger. The message arrived hours before her wedding ceremony and it left Casey in tears.

Casey was out with her friends having fun the day before the wedding because she knew this was the last time she was going to be a single woman. As she was partying, her phone started ringing.

Casey had been receiving lots of congratulation messages on her phone during this past couple of days. However, this text was something entirely different.

The text was from the stranger who revealed to Casey that Alex had been cheating on her for years. Casey couldn't believe what she was seeing and she was brought to tears.

The text also included screenshots of conversations between Alex and his mistress. This broke Casey's heart and she knew that she had to do something about it.

While most people would cancel the wedding, this is not what Casey wanted to do. She was shocked by the fact that the love of her life betrayed her like this and she wanted some revenge.

Instead of canceling the wedding, Casey planned her revenge. She was going to show everyone who Alex really is and that he should never be trusted again.

11. Walking Down The Isle

The big day came and Casey was being walked down the aisle by her father. She says that wearing the bride dress felt like a costume to her because it was all based on lies.

As everyone was waiting for Casey to read her vows, she instead pulled out her phone. No one understood what she was doing but what happened next left everyone in shock.

9. Who Alex Really Is

Casey looked everyone in the eye and started reading the text that she received the previous night. Everyone was listening, including Alex's parents who were disappointed in their son.

Casey didn't just read the text, she went into detail. She told everyone exactly how Alex felt about his mistress and that he has been untruthful for years!

Alex was so ashamed by his actions that he couldn't anything else other than to run away. He knew that he was in the wrong and that everyone could finally see him for who he really is.

As you can surely imagine, Casey was heartbroken and her friends and family came to support her. Casey was so close to making a huge mistake by marrying Alex.

5. The Party Goes On

Even though Casey was sad, she told everyone that the party shouldn't stop. She wants everyone to have a good time and to celebrate the truth!

Despite all the drama and the heartbreak, the party went on and people had a good time. They were happy that Casey found out about Alex's mistress and that she gets to live a happy life without him.

Some might say that Casey shouldn't have made this problem public, but what do you think? Did she do the right thing?

The publication "Elle Online" did a voting poll asking the previous question and it found that more than 60 percent of people who voted would've done the same thing as Casey.

Even though Casey's wedding didn't go as planned, she at least found out the truth. Alex was not "The One" and Casey can find someone else who deserves her love.