Hedwig Gone Rogue: This British Couple Learned The Hard Way Why Having An Owl As A Ring-Bearer Is A TERRIBLE Idea

Bridget Daly
Hedwig Gone Rogue: This British Couple Learned The Hard Way Why Having An Owl As A Ring-Bearer Is A TERRIBLE Idea March 30, 2018 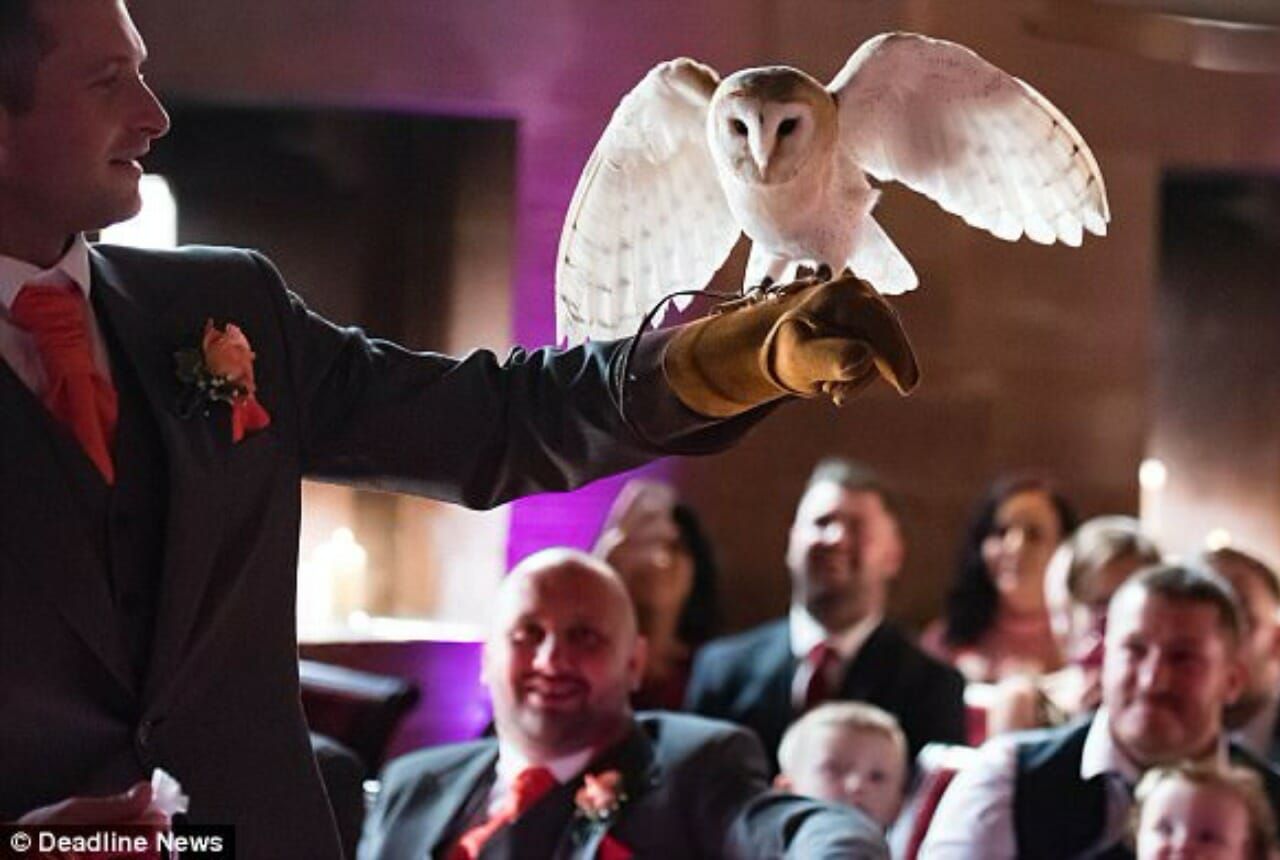 For one charming young British couple, getting married in an IRL castle didn't give off enough of a Harry Potter vibe to ensure that they would both experience the most magical wedding day that money can buy. Because using a niece or nephew of the bride or groom is the tired, easy choice for selecting a ring-bearer and often reserved for peasant normies, Jeni Arrowsmith and Mark Wood splashed more than just a few pounds to hire an owl as the only non-human member of their wedding party. Tying the knot at Peckforton Castle, Tarporley, in Cheshire, England, these two Brits learned the hard way that owls can and WILL go rogue--with no regard for both the venue and the wedding party's preference to go home with all of their limbs intact.

The Best Laid Plans Of Owls And Men

Jeni Arrowsmith and Mark Wood certainly had lofty goals for their big day. Not wanting to insult their posh guests with the reductive display of a small child teetering down the aisle to give them their rings, the couple dropped some serious pound sterling to secure an owl-for-hire as part of the wedding party. Because really, how could having a wild animal perform a service in a small, enclosed setting EVER go wrong?

Hedwig, Is That You?

While every self-respecting Harry Potter fan knows that Hedwig can hold her own against a troop of Death Eaters, there's a reason why she didn't carry the rings for Bill Weasley and Fleur Delacour. Shortly after the majestic white barn owl began to travel down the aisle, it went feral and set its sights on the groom's best man. What was first an enjoyable surprise for the wedding guests turned into a scene straight out of a low-budget horror flick.

Stacey Oliver, the professional photographer hired to snap memorable moments from the wedding knows exactly who to blame for this flurry of feathers. When one of the groomsmen pointed at the owl, it triggered the animal's training and he set off--talons up and ready to go. "The owl sees it as a sign to fly to the hand," said Oliver. "The owl has just dived in and hit the guy-- who is terrified of birds. [He] fell off his chair."

As evidenced by the look on the best man's face, the spontaneous owl attack wasn't the high point of the day-- for him, at least. While surrounding guests couldn't hold back their laughter, the best man collapsed to the floor in an attempt to fend off the feral animal. "For some reason the owl just decided he wanted to go for him and he was just terrified," said Stacey Oliver, wedding photographer. "He's absolutely petrified of anything that flies."

According to this unlucky best man, there's one golden rule to follow when getting assaulted by razor-sharp claws: do the stanky leg and scream like a little girl. While owl attacks in the wild are often quite rare, they DO happen--and can leave their victims battered and bloody. While this best man escaped his attack relatively unscathed, not all victims are so lucky.

Looking On The Bright Side

Thankfully, the bride and groom found the whole ordeal an entertaining addition to their big day. "It was absolutely hilarious. Peckforton Castle have never seen it before," said the bride. "It was an amazing day for us both, and has given us great memories we will never forget."

For bride Jeni Arrowsmith, the eventful wedding ceremony resulted in an pleasantly unexpected side effect--sudden local fame. "It made the wedding because we were all talking about it all night," she said. "My phone hasn't stopped-- I've had loads of people calling me. It's been wild."

Jeni Arrowsmith and Mark Wood are certainly not alone when it comes to unexpected wedding day disasters. For one unfortunate Minnesota couple, a lakeside photo op turned into an unplanned plunge capable of ruining thousands of dollars worth of formal wear. While a few members of the bridal party were able to escape unscathed, most were plunged into chest-deep water.

Forget wedding crasher--for this unlikely couple, their big day was graced by the presence of a wedding FLASHER. During the ceremony, a streaker clad in just his underwear made a surprise appearance while gesturing at the shocked guests. In the video, a disgusted onlooker brushes off the shocking incident by claiming that the flasher struggles with mental issues.

While most people want to cry at the thought of dealing with one person's night farts for the rest of their lives, this groom couldn't stop laughing while exchanging his vows. While his new bride even joins him at one point, she eventually emplores him to "please be serious." You know what they say--if you can't cry, laugh.