Possible Cancer Signs So Subtle You Might Miss Them, But Should Never Ignore

Camila Villafane
Possible Cancer Signs So Subtle You Might Miss Them, But Should Never Ignore December 17, 2018 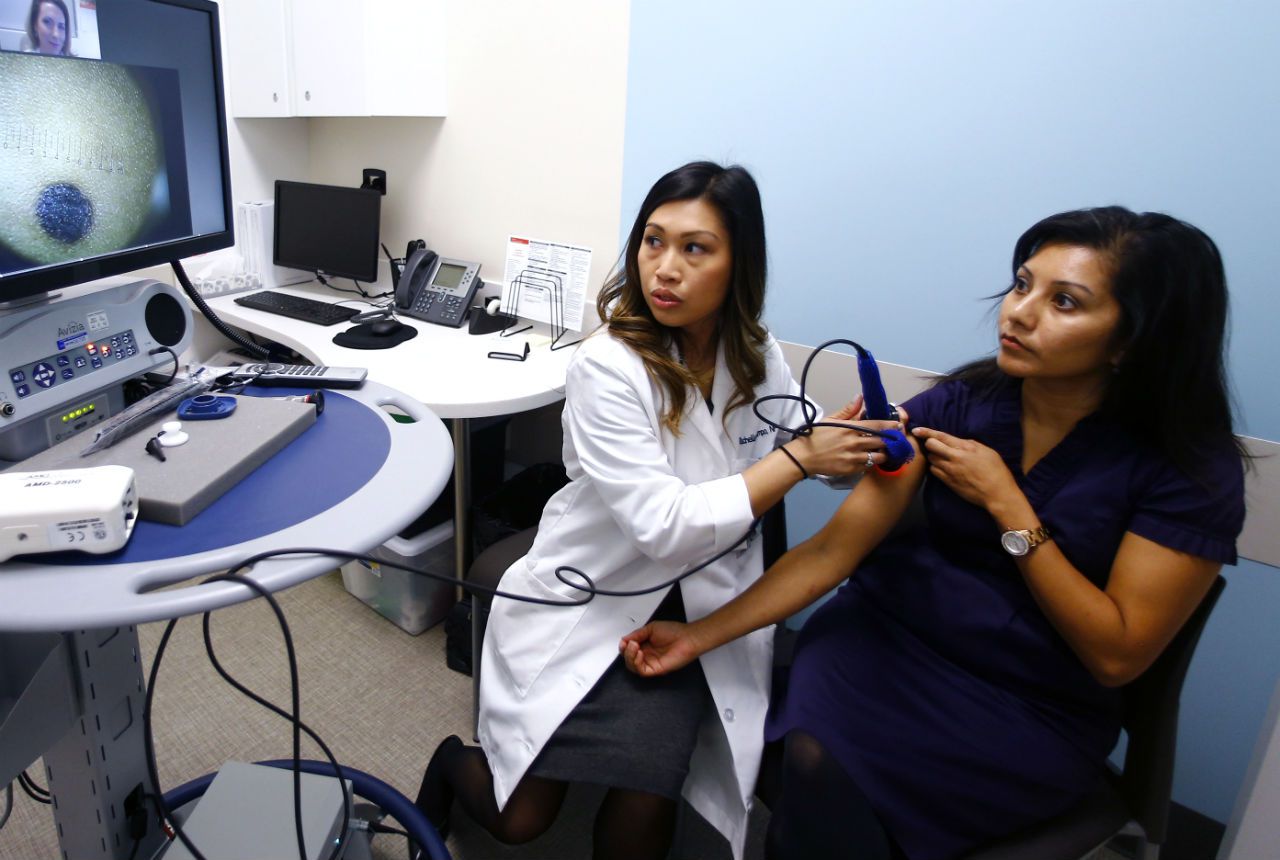 Medical professionals often call cancer "the silent killer." And there are good reasons why. Because most cancer signs and symptoms don’t show up until it’s too late to do anything about it. So, when it comes to cancer, don’t rest on your laurels. And just in case, here are some possible cancer signs that might help you stop its progression before it’s too late. A lot of these symptoms could indicate something much less serious. So always check with your doctor if you're concerned.

Lumps may appear pretty much anywhere on your body, so leave no stone unturned when you check yourself in the shower. Remember that basal cell melanoma or skin cancer might be responsible for these lumps underneath your skin. See your doctor if the lumps feel sore, because you know, prevention is better than cure. But before you totally lose it, remember that not every bump is worth losing sleep over, okay?

An upset stomach isn't always the result of indigestion. If your belly is constantly swollen or upset, even when you haven't eaten anything to cause it, then you could be dealing with colorectal cancer. And even if you don't show any early signs of stomach cancer, guess what? H. pylori is a common type of bacteria that's present in pretty much one half of the entire world's population. The good news is that is super easy to test. But if you don't catch it in time, it'll put you at risk of stomach cancer.

Have you fallen recently? Did you bang your elbow against something? No? Then how did you end up with such a nasty bruise? Unexpected bruising is a serious indicator that your body is leaking blood, which causes you to bruise easily. Get checked right away. Better safe than sorry, right?

If you’ve swallowed a bunch of antacid tablets and the acid reflux won’t go away, your body might be trying to tell you that you have esophageal cancer. The esophageal lining is vulnerable to stomach acid and can cause a precancerous condition known as Barrett’s esophagus. But don't go ahead and self-diagnose, or waste an entire day googling your symptoms online and panicking. Go see a doctor and get tested, instead.

You probably never imagined that something as basic as back pain or pelvic pain could be one of many possible cancer signs. But if you’re getting these symptoms, you could be developing ovarian or liver cancer. Plus, back pain is also associated to bone cancer. But if you're one of the lucky ones who have never struggled with back pain, the next potential cancer sign might scare you a bit.

See your doctor if you find yourself totally winded when you go out for a short walk. If you're really overweight, or you're not into exercising that much, then that could easily explain away your symptoms. But it could also be an early indicator of breast cancer and bowel cancer, which tends to spread to the lungs and cause serious damage.

Moles can be a bit unsightly or completely adorable. Sometimes they’re harmless and sometimes they’re not. But moles should never bleed, change size, or shape. If they are then it’s possible that there are cancer cells growing underneath them. Now, everyone gets the next symptom at least once a year. But we tend to chalk it up to the temperature dropping or seasonal allergies when it could be something much more serious.

It’s not flu season yet but you feel all the symptoms, such as fatigue, fever and pain. If that’s the case, then your body might be reacting to the cancer in your body. But it might also be something less serious like a common cold. Feeling lethargic, like you're experiecing flu-like symptoms is also a sign of hypothyroidism. So it's best to check yourself before you wreck yourself, you know what I mean?

You might have a problem if your freckles start to change. The same goes for warts. Neither of these things should be changing shape or color. In fact, if you notice a crusty surface over a sore, a wart or a freckle, it could indicate Squamous cell carcinoma. But there's another symptom that can also affect your skin...

If your skin tone becomes unusually yellow, you might have jaundice. This means your liver may have been compromised. But your skin might go from yellow to red, as well. Sometimes, these changes might be related to cancerous tumor growth. Skin color usually changes when your body is trying to tell you something, so make sure to listen closely and get tested.

Night sweats don’t sound like a big deal, I mean, we're all had them, right? But unless you’re going through menopause, or you’re living in the Sahara dessert, there’s no reason you should be having them. Lymphoma and leukemia are often associated to this symptom. But if you are experiencing night sweats and you don't know why, then now is a great time to go get a check-up right away.

You Develop A Fever

When cancer spreads beyond its origin point, your body will develop a fever. This symptom is one of the main signs of leukemia and lymphoma. So as cancer continues to compromise your immune system, you’ll be prone to more infections, which will raise your body temp. But hey, just because you got a fever once does not mean you're dropping dead in a week. Better make an appointment and discuss it with your doctor before you go crazy.

Weight loss is great when you’re exercising and dieting. But cancer also deprives your body of nutrients, hence why you might be losing a few pounds too many. So, if you’ve lost 20 pounds, for example, and it happened in a short period of time, you could have cancer in the esophagus, stomach, pancreas or even lungs.

If you smoke or chew tobacco, find a mirror and stick your tongue out. If you notice any white patches on your tongue or cheeks, you could have leukoplakia. But if you catch it in time, you can prevent cancer from developing. Now the next one is kind of tricky because seriously, we couldn't name a single person who hasn't experienced the following symptom.

People suffering from leukemia, colon cancer or blood-related cancers might find themselves feeling extremely fatigued. So, if you sleep a full 8 hours and take naps, but still feel drained, you should see a doctor right away. It could be an army of conditions and illnesses, such as fibromyalgia, hypothyroidism, and even diabetes. So it might be time to do some adulting and find out if you're just stressed about work or your body is trying to tell you something.

Difficulty swallowing is a symptom that you should recognize as a potential sign of cancer. Tumors could be blocking the throat or esophagus. If you feel that food is sticking to the throat, go get checked out. This isn’t normal and your body could be telling you that you have esophagus or stomach cancer.

Hoarseness isn't a disease, but it could be a symptom of a larger problem, particularly when you've noticed your voiced changing over time. Lung cancer damages the nerves that can interfere or even paralyze your vocal cords. This causes abnormal voice changes among other things.

Did you know that skin cancer and oral cancer can be easily diagnosed from sores? Sores should never be ignored, especially if they form anywhere near your private parts. Early diagnosis can lead to effective treatments and prolong your life. But the next symptom is something we would've definitely overlooked, (guilty as charge!)

You Wheeze A Lot

A whistling sound as you breathe, and high pitch breath sounds may be a warning sign that something is constricting your airway as you exhale. This means that a tumor might be present, creating issues as you breathe.

Injury and working out can cause pain, of course, but if you’re experiencing agony for absolutely no reason at all, then this isn’t normal. Pain symptoms like stomach cramps, bone pain, and headaches that won’t go away are possible cancer signs.

Joint pain that has no apparent cause is your body’s way of telling you that you might have cancer. Now, if you jog every day, or ride your bike a lot, it could just be a matter of taking it easy for a while. But you can never be too careful, so (you guessed it!) better get tested, asap.

Blood in urine can be a sign of an infection, but it can also mean you have bladder cancer. If it is the Big C, then it might be accompanied by other warning signs like an inability to pee or urine leakage.

You could have a serious problem if you experience constipation and diarrhea, followed by pain in your abdominal area that won’t go away. Check your stool size too, as this can be a warning sign that you have cancer.

Bleeding anywhere is always an indicator that you should see your doctor. You probably already know that! Nipple bleeding could be related to breast cancer. Vaginal bleeding could be a sign of endometrial or cervical cancer. But if you find blood in your stool or you cough up blood, you could have cancer as well.

A minor cough is no big deal. But if you can’t stop coughing and you don’t have a cold or a flu, see your doctor asap. It might be allergies, but if you feel short of breath or chest pain, it could indicate there’s cancer present.