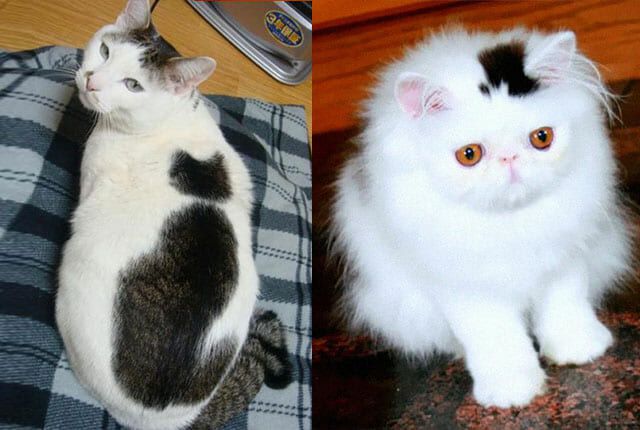 Cats are paw-some. They can climb wherever they please, sleep all day, slither into things like bottles or confined spaces in your furniture, and lay under the sun for hours. In fact, they can pretty much do whatever their tiny heart's desire, which is one of the reasons people love them so much. So, to honor these adorable felines, we compiled the most bizarre and hilarious cat fur patterns that'll simply make your day. Nature, you crazy.

Was she born with it? Or is it Maybelline? Nope. This is another one of Mother Nature's shenanigans. Only this time, she decided to make it look as if this beauty is wearing cat ears.

In Case You Weren't Sure

Mother Nature decided to brand this cat as well, with the word "cat". So, in case there's someone out there that wasn't sure. It's not a donkey, or a dog. Just look at the fur, will ya?

Don't mess with this cat. He's got a "Furor" that can't be controlled. And if you think you can run or hide, paw-lease! He will always find you no matter where you hide.

This kitty looks more like a cow. But make no mistake because if you call him one he's got enough cat-titude to take his claws out and attack. So, for now, just let him enjoy his cat-nap.

Watch out with this cat, cause he's embraced all the physical qualities of Harvey Dent, aka Two-Face from Batman. We certainly wouldn't want to get on this one's bad side.

So, what if the only thing this kitty does is pro-cat-stinate all day? When you have a heart mark on your fur, you're entitled to chill on the chair and watch cartoons.

It's so tiny it's practically fresh out of its mother, but already this baby is ready to spread some love in this world. Now if only it could figure out how to text it'd have the texting lingo down.

When this cat decides to take a nap in the middle of the afternoon, his shadow takes one with him, cause he spends so much time chasing after mice that they're both pooped.

This is one of those rare markings that will have your cat looking forever shocked, even when he's hissing at you or mewing. Now if only we could get him to spill the beans on the gossip that has him so shocked!

This cat's so cool, Mother Nature tattooed his face on his stomach. Double trouble?

All hail the Fûhrer! Hitler was well known for disliking cats, and now it seems like he's actually come back as one. Karma at its finest.

You might think we're being paranoid, but there seems to be something following this cat and it's not his shadow either. Looks a bit like a Sasquatch or "The Grudge".

This is what you get when Batman and Catwoman get together after a few beers. You happy now? You've totally altered the gene pool for cats everywhere! Seriously, this is the baddest out of all the other cat fur patterns.

This kitty was so cool with his inception-like fur twin that we simply had to look at it twice. Never turn your back on him because he's always watching from behind.

The Hat In The Cat

Looks like Sir Fluffington over here could use some company. Won't someone please throw a ball of yarn for him to play with? He looks so lonely, but he's got some major swag, with that hat-like marking on his head.

Patches over here has the qualities of a Time Lord. While one heart beats inside its chest, the other one is on its fur for the entire world to see. Now that's positively paw-some!

Some women wait forever to grow out a pair of on-point brows like these. Meanwhile, this kitty came out with two heavy set dark markings that would make any beauty guru green with envy.

How about two cats for the price of one? There's no need to ask who the alpha cat is in this neighborhood. It looks like it absorbed one of his twins in its mother's womb.