Childhood Photos of the World’s Most Notorious Criminals 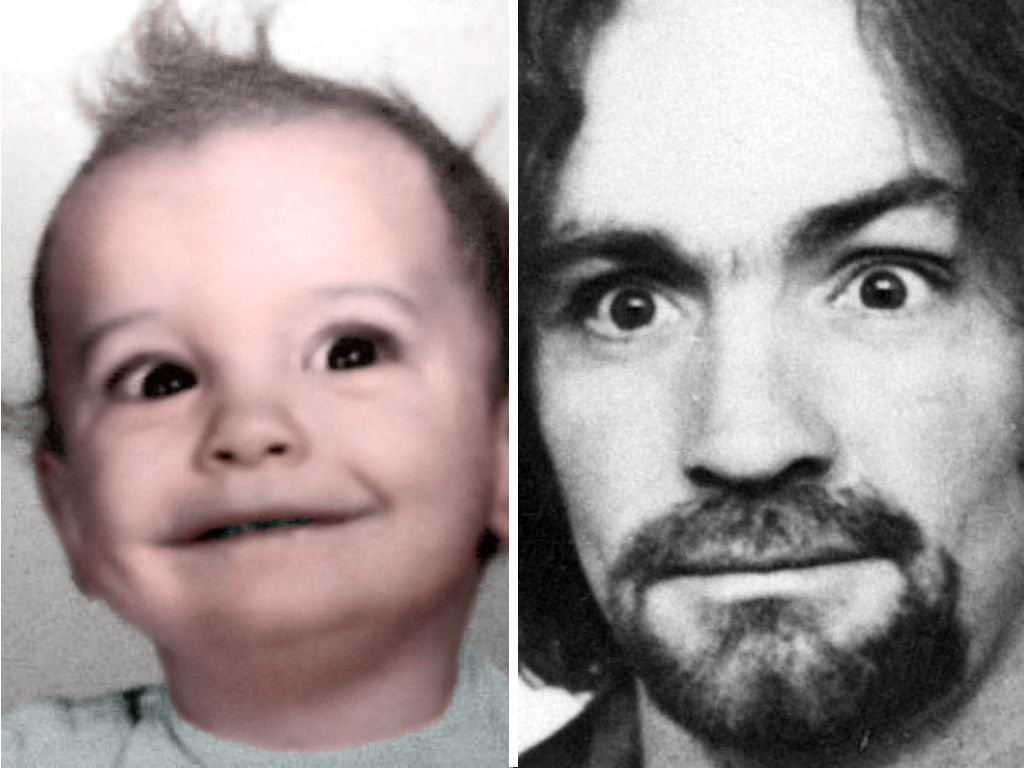 Cute kids don’t usually bring fear to mind, but knowing what they could grow up to be should elicit a bit of terror. In most cases, the childhoods of these criminals have some serious similarities, including abuse, tragedy and a serious lack of compassion.

Al Capone as a Child

Born in Brooklyn, New York in 1899, Al Capone aligned himself with dangerous people early in his life. He joined a gang as a teenager and because of his strong stature, he soon became a bouncer at brothels. In his teen years, he quit school after the sixth grade and associated with notorious street gangs.

Al Capone as an Adult

Al Capone gained notoriety during the Prohibition era in America. His connections to criminals that illegally imported alcohol lead him to quickly gain power and status as a crime boss, leading Chicago operations in bootlegging, prostitution and gambling. Although he was connected with many gruesome crimes, Capone was arrested on tax evasion charges at 33 years old.

Ted Bundy as a Child

As a child, Bundy felt alone and unable to create meaningful relationships with others. He claimed, “I didn’t know what made people want to be friends.” Ted was raised originally believing that his mother was his sister because the family wanted to keep his mother’s pregnancy a secret. This may have made him question the people's motives throughout his lifetime.

Ted Bundy as an Adult

Bundy murdered more than 30 women and escaped from jail twice to commit more crimes, cementing his place in history as one of America’s most notorious serial killers. Bundy described himself as "the most cold-hearted son of a bitch you'll ever meet.” His story continues to captivate people who are amazed that someone with his confidence and charisma could commit such heinous crimes.

Jeffrey Dahmer as a Child

Jeffrey Dahmer showed alarming red flags in behavior as a child, including a fascination with animal bones and carcasses. When he was four years old, Jeffrey helped his father clear animal remains from under their porch, which fascinated and thrilled the young boy. His father encouraged the seemingly scientific curiosity and taught his son how to clean and preserve animal remains.

Jeffrey Dahmer as an Adult

Dahmer’s childhood fascination with bones continued into his criminal adulthood. Many of his murders involved necrophilia, cannibalism and the preservation of body parts, including some whole skeletons. His fascination turned into a collection and he liked to keep “trophies” of his victims. Dahmer was sentenced to 15 terms of life imprisonment for his murders in 1992.

John Dillinger as a Child

Born in 1903 to a middle-class family in Indiana, John Dillinger experienced tragedy early in life when his mother died when he was four years old. His father remarried years later, which upset Dillinger because he wasn’t fond of his new stepmother. His father reacted to the upset by physically beating his son. As a child, Dillinger was frequently in trouble and although he was intelligent, John left school at an early age.

John Dillinger as an Adult

From September 1933 until July 1934, Dillinger and his violent gang, dubbed “The Terror Gang” by the press, committed crimes across the Midwest including over a dozen bank robberies which racked up more than $300,000 for the gang. The FBI labeled Dillinger “Public Enemy Number One,” leading Dillinger to undergo several plastic surgeries to change his identity, including the chemical removal of his fingerprints.

Lee Harvey Oswald as a Child

Lee Harvey Oswald was born in Louisiana in 1939. His father died two months before he was born and for a brief time, Oswald was placed in an orphanage. As a child, Oswald showed some disciplinary problems which included fighting with classmates and skipping school. As a teenager his temper got worse and he sometimes got violent during arguments with his mother.

Lee Harvey Oswald as an Adult

In 1963, Oswald was found responsible for the assassination of President John F. Kenny, one of the most shocking events in American history. While on the run from police officers, Oswald also shot and killed a cop. The events of that day have been the cause of innumerable conspiracy theories surrounding Oswald’s past in the Soviet Union and the American government.

Bonnie Parker as a Child

One-half of the infamous duo Bonnie and Clyde, Bonnie Parker was born in Texas in 1910. Her father, a bricklayer, died when she was just four years old. As a child she was a gifted student who enjoyed writing poetry and reading romance novels. At four-foot-ten-inches and eighty-five pounds, she didn’t look like a would-be criminal.

Bonnie Parker as an Adult

Bonnie met Clyde in 1930 and a month after their meeting, Clyde was jailed for stealing a car. Two months later, she smuggled a pistol into his cell to help him escape, and from then on they were inseparable. During one escape, their car wrecked and Bonnie hurt her leg in the gasoline fires that ensued, causing her to walk with a limp for the rest of her life.

Clyde Barrow as a Child

Clyde Barrow was born in 1909 into a poor farming family in rural Texas. Clyde attended school until the age of 16 and he had ambitions of becoming a musician after learning to play the guitar and saxophone. Clyde began a life of crime in his teenage years under the influence of his older brother, Buck.

Clyde Barrow as an Adult

At the age of 20, Clyde was already on the run from police after stealing cars and committing armed robbery. Once he met Bonnie, their crimes escalated until their deaths. Bonnie and Clyde, along with Clyde’s brother Buck and his wife Blanche, evaded law enforcement for years by speeding away from the scenes of crimes. The duo killed 13 people in their reign of terror.

David Berkowitz as a Child

After his birth in 1953, David Berkowitz was adopted by a middle-class family in the Bronx. His adoptive parents were loving, but Berkowitz grew up feeling rejected because he was adopted. In his youth, he was larger than most kids his age and he began taking his anger out on other people, leading to a childhood of being known as a bully.

David Berkowitz as an Adult

David’s anger built up within him and his inner demons drove him to become a murderer. He was originally dubbed by the press as “the .44 Caliber Killer” because of his weapon of choice, but he later became known as the “Son of Sam” after he left letters with this name at the scenes of his crimes. Berkowitz pleaded guilty to six murders in 1978.

Ted Kaczynski as a Child

As a child, Ted Kaczynski was quiet and shy. He loved animals, like the bird perched on his shoulder in the photo, and he also collected coins. What made him stand out was his IQ, which at 167 placed him just above Stephen Hawking and Albert Einstein. When Kaczynski was 15, he graduated from high school and he started his freshman year at Harvard when he was 16 years old.

Ted Kaczynski as an Adult

For 17 years between 1978 and 1995, Kaczynski sent bombs around the United States which killed three people and injured dozens. He often sent these bombs to universities and airlines, giving him the nickname “the Unabomber.” His younger brother David was the one who eventually turned Ted in to the FBI and then fought to keep him out of the death chamber.

Aileen Wuornos as a Child

Wuornos had a lonely and abusive childhood that would shape the rest of her life. Aileen never met her father because he was in jail, where he would later commit suicide. At the age of four Aileen was abandoned by her mother and left under the care of her grandparents. Her grandfather was a violent alcoholic and he sexually assaulted Aileen on multiple occasions.

Aileen Wuornos as an Adult

After committing a string of smaller crimes, Wuornos murdered seven men in Florida between 1989 and 1990. Wuornos claimed that all of the murders were done in self defense after the men had attempted to rape her while she was working as a prostitute. In 2002, Wuornos became the tenth woman to receive the death penalty in the United States since the 1976 reinstatement of capital punishment.

John Wayne Gacy as a Child

John Wayne Gacy and his siblings grew up with an abusive, alcoholic father who beat his children if they misbehaved. Gacy also witnessed his father physically assaulting his mother. Gacy was born with a congenital heart condition that made it unsafe to play with other children, which furthered his isolation.

John Wayne Gacy as an Adult

John Wayne Gacy was sometimes known as the “Killer Clown” for his double life as a clown performer and serial killer. After being convicted of sexual assault in 1968, it was discovered that Gacy had raped and murdered at least 33 young men in Illinois and buried most of the victims under his house.

Charles Manson as a Child

Charles Manson had a tumultuous childhood, stemmed mainly from his mother’s abandonment. After constantly trying to sell her infant son, she landed herself in jail for three years when Manson was only four years old. After she was released from jail, his mother gave him a hug when she returned home. Manson would later look back on that moment and call it his “sole happy childhood memory.”

Charles Manson as an Adult

Manson’s life of crime started at age 13 with some robberies and ended in 1969 when the cult he had formed, dubbed “The Manson Family,” committed a series of nine murders, including the murder of actress Sharon Tate. He famously brainwashed young women using psychedelic drugs to commit crimes for him. He was charged with conspiracy and spent the rest of his life in prison.

Timothy McVeigh as a Child

Timothy McVeigh’s parents divorced when he was a toddler and the event caused a lot of repressed sadness in McVeigh. He would later deny that the divorce had any lasting effects on him. His friends commented that they thought it was odd that McVeigh never mentioned his mother. Some of his other friends even thought his mother was dead.

Timothy McVeigh as an Adult

In 1988, McVeigh joined the Army because of his interest in weapons and survivalism. After returning home from the Gulf War, McVeigh rented a truck and filled it with explosives. He parked this truck outside of a federal building in Oklahoma City in 1995, killing 168 people and injuring over 600, causing the deadliest act of domestic terrorism in United States history.