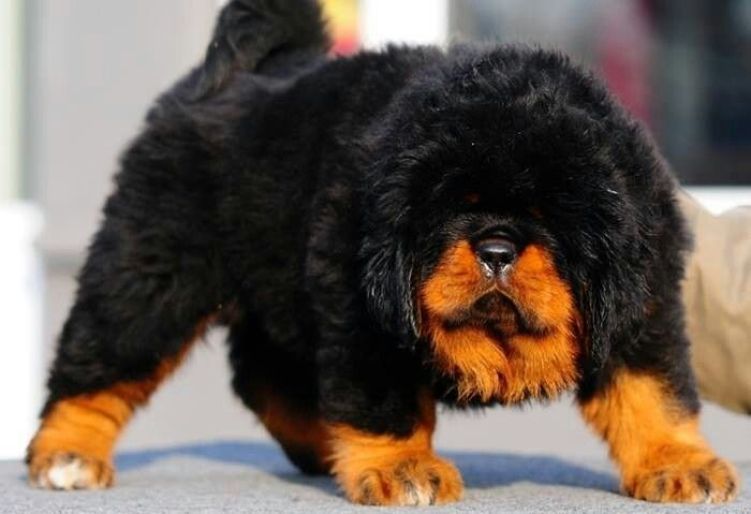 A family from a small village in China wanted to get a dog but they didn't want just any kind of dog, they wanted a big one that could protect their home from unwanted intruders. This is why the family decided to go with a Tibetan Mastiff. This is one of the world's biggest dogs but to everyone's surprise, the dog grew up to be something entirely different. Something that no one ever expected.

The family who lives in China wanted to get a dog because they like them and also because thieves are running around their village all the time. This is why they thought that getting a Tibetan Mastiff is the best decision that they could make.

What's awesome about Tibetan Mastiffs other than their adorable faces is the fact that they are super big. They grow so big that some people even mistake them for bears!!

This is the little puppy that the Chinese family adopted. Even though he is little right now, a Tibetan Mastiff will weigh about 82 kilograms (180 pounds) when he grows up. Now, that is a giant dog!

The Chinese family adopted the little puppy and they kept feeding him lots of delicious food. This is when the first "strange thing" started happening. The dog would eat so much food that the Chinese family had to spend nearly half of their paycheck on noodles and fruits for him.

Things started getting really strange when the dog began getting up on his two back legs. This made it clear, the dog was not a Tibetan Mastiff after all. It was something else!

One year passed since the Chinese family adopted the little puppy and the house pet grew into a giant bear. It was clear that the animal was not a Tibetan Mastiff and that the owners needed to call the authorities.

The problem here is not only that the Chinese family is raising a bear as their home pet, but the fact that this is an endangered species. It's the Asian Black Bear and it is protected by law.

The Chinese family knew that they couldn't keep the bear around the house anymore now that he was all grown up and they decided to call the authorities for help. This was risky because they could end up getting fined or even taken to jail!

The reason why this type of bears are an endangered species and they are protected by law is because they often get sold on the Black Market. Luckily, this is not going to happen to this bear because his owners called the police.

One of the things that motivated the bear's owners to take the risk of calling the police is that they wanted him to have a bigger home. The bear needs to run free in the woods in order to live a happy life and not in a dog cage.

If there is something that we can be sure about, then it has to be the fact that this bear is not a family pet. The bear's owners also complained that he eats too much for them to afford to keep him around. Feeding him for one month will make anyone go bankrupt!

The bear's owners knew that they faced time in prison but they decided to do the right thing anyway. After all, they were the ones who got fooled by the seller who promised them a Tibetan Mastiff.

It didn't take long for the police to arrive. They rushed to the Chinese family's home because they couldn't believe that someone has been raising a bear as their home pet for more than one year now.

The police officer who arrived on scene thanked the Chinese family for calling the authorities and for wanting to provide the bear with a happy life. However, the policemen also told them that they were not going to leave unpunished.

Since the Chinese family was the ones to call the police, the policemen took it lightly on them and decided to only give them a fine. This is a good outcome because the alternative was jail time.

Another great thing that happened was the fact that the policemen learned about the person who sold the bear and went to arrest him. The bears can finally breathe safely.

The biggest challenge had yet to come. The policemen needed to find a home for the bear and the problem here is that since the bear was raised next to a home, he didn't know how to integrate with all the other animals.

Fortunately, a local animal rescue group who specializes in wild animals decided to help out. They are going to take the bear to a special rescue center where he can learn the ways of his peers.

Let's hope that the bear can start making new friends at the rescue center before he gets released into the wild. He is going to live a great life!

After giving the bear to the authorities, the Chinese family decided to go to an authorized animal seller where they could finally purchase the Tibetan Mastiff that they always wanted.