Danny Dabiri
Hilarious Christmas Pranks To Pull On Christmas Morning In Front Of Everyone December 7, 2017 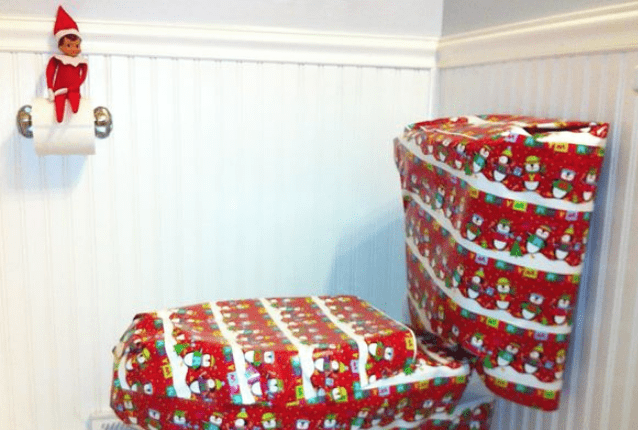 Christmas pranks are the perfect holiday treat. Because they make your Christmas morning into a Vegas-style gamble. And why not make your family's holiday more risky, tense and possibly contentious? So here are some of the greatest Christmas morning prank ideas.

Whoever did this to their family should be cutoff and not allowed to go to college. Not only is the Elf-On-The-Shelf going to watch you pee, but you have to place him somewhere, probably, since this will be waiting for you in the morning.

This Brother Of The Year Used Zip Ties

That's a solid 10 minutes of work right there.

This Person Wrapped Everything In The Fridge For Whoever Cooks Breakfast

Not only do people get up early on Christmas morning, but the person who volunteers to cook is often a saint. And this is how these people repaid that saint this year. Try it at home! (Don't try it at home.)

Christmas pranks have been a thing for a very long time. So long, in fact, that president Teddy Roosevelt's sons, Quentin and Archie, "put snakes in congressmen's pockets and smuggled a Christmas tree into the mansion in violation of their father's conservationist edict."

These Guys Gave Their Family A Heart-Healthy Surprise

Ferrero Rocher is a holiday staple when you impulse-buy your gifts in a line that is taking way too long at a Ross (dress for less), but they go up another level in coolness if you do what these people did by replacing them with healthy, wholesome, and delicious Brussels sprouts.

Who doesn't want a tiny-headed Steve Buscemi waiting for them in their very own home at 8AM on Christmas day? Try this at home! (Again, don't try this at home).

This Woman Got "Loafers"

These People Scared Their Neighbors By Making Man-Eating Snowmen

All you need are kid pants, kid shoes, and either the chopped-off-legs of a real kid, or some cotton balls. These guys nailed it.

This is almost meaner (almost) than the one where people gift-wrapped a toilet. That one is potentially dangerous, but so is this one, depending on how addicted your family is to coffee (read: extremely, probably).

These complete jerks warpped a pan, which is a funny way to hide a good gift, actually. But then inside the packaging for a good gift was just socks, which must have been absolutely brutal.

After about 20 minutes, people really start losing interest in whatever is in the middle. Hopefully the gift card was for at least %20.

A positive prank is always the nicest kind to pull if you're going to pull one on anybody on actual Christmas morning. Especially the kind where they don't expect anything and the gift is actually huge. This parent has it figured out.

This Woman Pranked Her Friends' Kids With Bad Presents

The greatest part is that most of the kids know it's a prank right when they see the gift, but that small amount of residual hope comes back to bite them and some of them end up crying. It's great. It's also really refreshing to see some of the kids do their best to appreciate the horrible gifts.

You Can "The Godfather" Your Kids!

These people scared the bejesus out of their kids by having them wake up with a little something extra in their bed. Who doesn't love a gingerbread man!

These People Tricked Their Kids By Getting Them A Dog

These parents gave all their kids separate dog upkeep items like food and toys for a dog. The only thing is that they don't own a dog... yet. How happy the kids are makes this a great family prank, as well as a wonderful gift that will teach them all about responsibility, empathy, and loss.

This Person Surprised Their Family With A Santa Cat

The Santa cat is wearing a Santa hat and most people didn't expect it until the cat decided to join the party. This cat in particular does not look like the type of cat you'd want to strike up small talk with at the drink table.

These Guys Wrapped Their Mom's House In Christmas Wrapping Paper

So these guys made their mom "open" her present, which was just her own house.

There's nothing that will surprise everyone like saran-wrapping your tree. These people did just that and had it waiting for their family. Not the best thing for mom to find in the morning.

Christmas pranks can get pretty elaborate, so sometimes it's pretty easy to just stick to the classics like this family did. Nobody actually expects coal.

This guy's suggestion, that he's tried on people apparently, is to fill a whole bin with water and then to wrape it nicely. This seems extremely dubious unless you're freezing the thing. People know water when they feel it. This is really stupid but someone for sure has tried it.