Matthew Loffhagen
Try Not to Drool Over the Most Iconic Classic Cars of the ’50s and ’60s June 27, 2019Leave a comment 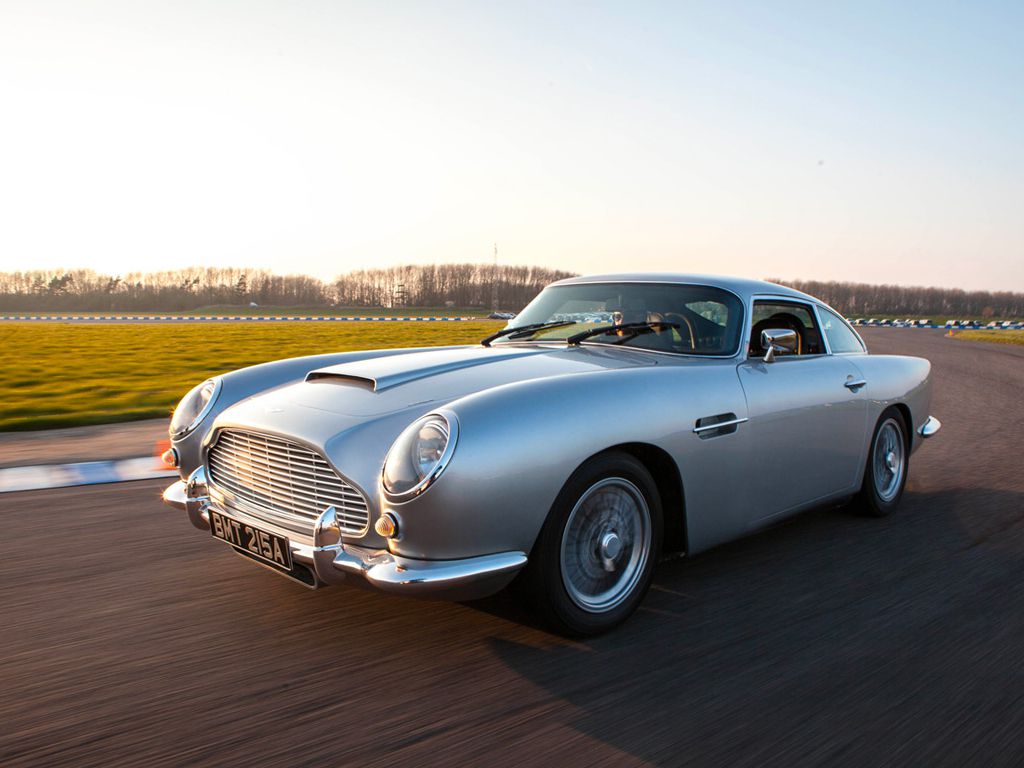 The '50s and '60s were fantastic decades for car manufacture. Few authentic relics from the era remain in working order, which makes them all the more special tocollectors. Gaze in wonder at these gorgeous classic cars...

When is was released, the '57 Chevy was actually something of a disappointment for Chevrolet. For the first time since the Thirties, the car was outsold by its closest rival, the '57 Ford. Nevertheless, the '57 Chevrolet's design - an improvement on the previous year's offering - quickly cemented this as one of the coolest, most desirable cars of the era, and earned it a permanent place in popular culture. In the 1990s, an authentic '57 Chevrolet was worth around $100,000, and while the speculator bubble popped soon after this peak, today the car is still a very expensive collector's item.

Introduced in 1964, the Pontiac GTO quickly became one of the iconic cars of the '60s. The previous year, General Motors had entered into a voluntary ban on creating racing cars, which meant that the company started emphasizing street performance over top speeds. The result was the birth of the muscle car, as while some few high powered street cars were available in the past, it was the GTO that set the standard for how muscle cars should feel and handle.

While the entire Aston Martin DB series of cars are prized collector's items, by far the most iconic of the lot is the DB5. Named for Aston Martin owner David Brown, the DB5's greatest claim to fame is its association with a certain British superspy. After the car appeared in the "Jame Bond" movie "Goldfinger," it was cemented as one of the most recognizable cars in the world for decades to come.

Debuting in 1955, the Ford Thunderbird (known colloquially as the T-Bird) is credited with the creation of the concept of a personal luxury car. This came about thanks to the introduction of a back seat in the '56 model, which while controversial at first, proved useful in creating a more diverse car that could handle more than just a pair of passengers. Suddenly, it was possible for a car to both look good and ferry families around, making the automobile world a lot more complicated.

Much like its '57 younger sibling, the '55 Chevrolet Bel Air has become an icon of its era thanks to its crisp, stylish design. While the Bel Air debuted in 1954, the '55 model was a dramatic departure from anything that had come before, incorporating more straight lines in its design as well as a grill that was inspired by Ferarris of the time. The car was also given a powerful V8 engine which, while not a novel concept for a Chevy, certainly made it stand out from other cars that were released that year.

The '66 Dodge Charger was ahead of its time. The first generation of Chargers, its sleek boxy design proved so popular that its appearance didn't change much over the next decade, as long into the '70s echoes of the original degisn could still be seen in newer models. Nevertheless, the original Dodge Charger was equipped with a relatively weak engine, and sales were low. An even more iconic version of this car was released soon after...

While the original Dodge Charger can be credited with starting a long-lasting legacy for the car series, the '68 Charger, released two years later, is the true rockstar of the era. While initially slated for a 35,000 production run, the car proved so popular that almost 100,000 were manufactured. The '68 Charger's legacy lives on decades later thanks to its role in popular culture, most notably, its role as The General Lee in "Dukes of Hazzard."

Debuting in 1959, the Mark I Mini is one of the most recognizable cars of the next decade. The car became an intrinsic part of Mod culture and the British Invasion of the Swinging Sixties, and its appearance in films like "The Italian Job" helped it maintain its reputation up until the present day.

Debuting in 1963, the Porsche 911 line of cars has always been coveted by collectors for its sleek, eye-catching design. Based off sketches made by company owner Ferdinand Porsche in 1959, the car line was almost titled 901, but rival company Peugeot quashed these plans when it claimed to have the exclusive rights to giving a car a three number name with a 0 in the middle.

The Ford Mustang, which first went on sale in 1965, took many of the ideas from the Thunderbird to build another luxury personal car. Likely in part inspired by the Thunderbird, these car came with a comfortable back seat that made long road trips possible for more than two passengers. The 1964 James Bond movie "Goldfinger" helped ensure the popularity of the soon to be released car, and its legacy has continued in large part thanks to the Wilson Pickett song "Mustang Sally."

When most people think of the '50s, they instinctively think of the '59 Cadillac Coupe de Ville. The car's rear is its defining feature - its signature tail fins and protruding tail lights have been immortalized in the popular consciousness ever since. Over 50,000 Coupe de Villes sold in 1959, accounting for over a third of all of the car series' sales over its lifespan.

Debuting in 1953, the Chevrolet Corvette enjoyed numerous redesigns and reworkings over the next few decades, and all versions of the car are instantly recognizable and beloved by enthusiasts. Following its appearance in the 1960s television show "Route 66," the car became synonymous with freedom and adventure, leading Automotive News to call it "the most successful concept car in history and the most popular sports car in history."

The Ferrari 250 series of sportscars was one of the company's most popular offerings during its era. The first 250 was released in 1953, and the series then ran for a solid eleven years. The cars won numerous awards and acolades, but they weren't without their problems. The 250s were directly responsible for the creation of one of Ferrari's greatest competitors to this day...

The story goes that Ferruccio Lamborghini, the owner of a successful tractor manufacturing company, owned several Ferrari 250s. Lamborghini grew frustrated with the cars' flaws, most notably with their clutches, and contacted Enzo Ferrari to discuss what could be done to improve them. Ferrari responded rudely to Lamborghini's complaints, which led the tractor magnate to begin producing sports cars out of spite, going so far as to hire former Ferrari engineers to aid this work. The result was the '64 Lamborghini 350 GT, a car that proved so popular it allowed the company to establish itself as a rival to Ferrari to this day.

The Shelby Cobra 427 (known as the AC Cobra 427 outside of the United States) was the result of a partnership between the British AC Cars, car designer Carroll Shelby and American companies Ford. The goal was, essentially, to create a solid racing competitor to the Chevrolet Corvette - the car used a popular British body with a powerful American V8 engine inside.

Sometimes a car doesn't need to sell in high numbers to become iconic. The Buick Roadmaster Skylark, which debuted in 1953, was a special limited edition car that was released to celebrate the company's 50th anniversary. Unlike more widely available cars of the time, the Roadmaster Skylark was made in very small quantities in large part because it was mostly hand-made, making it a coveted car even at the time. By now, very few Roadmaster Skylarks remain in top condition, and these cars have become incredibly coveted collector's items.

The Cadillac Eldorado first debuted in 1953, and instantly became a classic. The car's second and third generation models, released between the years of 1954 and 1958, feel the most quintessentially '50s in design, thanks to sleek straight lines and protruding tail fins that were introduced on the '55 model.

While the Volkswagen Type 1 (affectionally known as the Beetle or Bug) was first designed and manufactured in the 1930s, it didn't begin to leave Germany in large numbers until after World War II. While the car had relative success throughout the 1950s, it really took off in the '60s, becoming one of the most recognizable cars on the road. The '63 model is probably the most iconic, thanks to its appearance in the 1968 movie "The Love Bug," which kicked off the longrunning "Herbie" series of movies. The titular character of the recent "Transformers" movie "Bumblebee" disguises himself as a '67 Beetle.

If there is any one vehicle that sums up the 1960s, it's the Volkswagen Type 2. The van was synonymous with the hippie movement, as it allowed for a group of friends to travel together in relative comfort. While all versions of this van have become regonizable, perhaps the most iconic is the '51 Samba - while this was a decade old by the time the hippie movement really started swinging, it's still the vehicle that most people associate with adventures on the road to Woodstock.

The Chevrolet Camaro was a direct response to the popularity of the Ford Mustang. Realizing that customers of the late '60s considered many of their contemporary models to look and feel dated, Chevy gave the world a long-nosed sporty muscle car. The first generation design proved so iconic and longlived that the fifth generation Camaro, which debuted in the late '00s, deliberately copied the older car's design aesthetic.

The Studebaker Champion is a car that dates back to 1939, and every incarnation during the '50s is instantly recognizable in its own way. Perhaps the most stylish and iconic, though, is the '51 model, which features a striking "bullet nose" front that's reminiscent of a fighter plane. This design element sadly didn't remain present on the car range for long, but nevertheless, it's gone on to be a tremendously popular icon of the decade.