When Coldstone Stole Cartoonist Adam Ellis’ Work, He Clapped Back And Made Them Pay Up

Bridget Daly
When Coldstone Stole Cartoonist Adam Ellis’ Work, He Clapped Back And Made Them Pay Up April 30, 2018 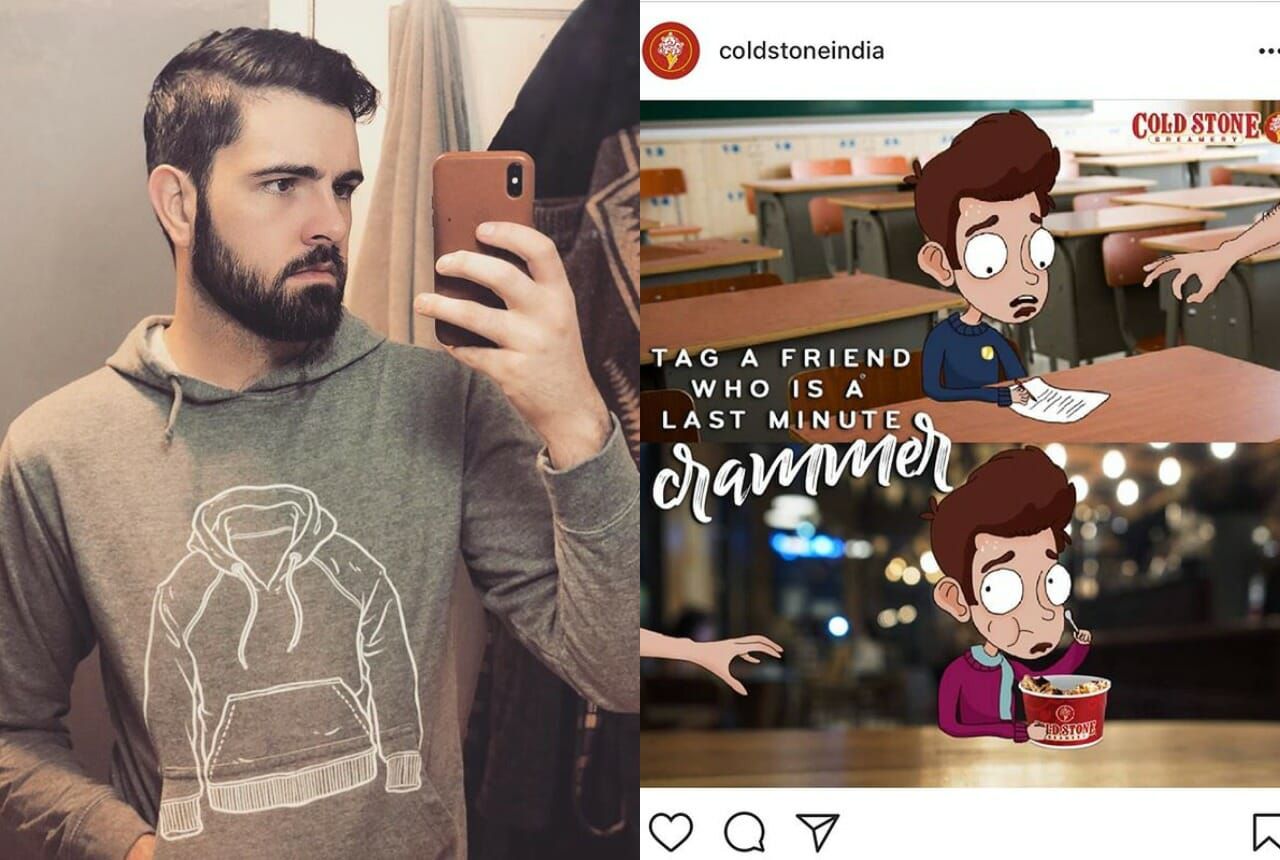 If you've spent any time online in the past five years, you've probably seen Adam Ellis' comics. Because with his vibrant digital drawings depicting the absurdity of modern life, Ellis has cultivated a strong social media fanbase. But recently, a large national company thought they could get away with stealing Ellis' work wholesale. And that's just fodder for a satirist like him. So when corporate ice cream giant Coldstone stepped in and swiped Ellis' work, the cartoonist mobilized his impressive fanbase and put the creamery on blast for a serious case of blatant art theft.

Even if you don't know Adam Ellis by face, you know him by his distinctive cartoons that have gone viral hundreds of times over. Recently, Ellis' profile has heightened significantly along with his social media presence thanks to his captivating "Dear David" saga. With over 1 million followers on both Twitter and Instagram, Ellis has successfully transitioned from a successful cartoonist to a viral celebrity.

Recently, Ellis discovered that ice cream giant Coldstone had stolen his art for promotional purposes. "Hey @coldstone @coldstoneindia let me know where to send an invoice for illegally tracing my art to promote your ice cream," captioned Ellis in an Instagram post dedicated to putting the corporation on blast. "Thanks!"

Soon after the initial Instagram call-out, Ellis took to Twitter to revise his demands. "It appears you stole and traced a bunch of my art for a large campagin," tweeted Ellis alongside a side-by-side comparison of his work and the advertisement. "Normally, I'd send an invoice to license my work, but in this case I'm asking you to make a donation to Inner City Arts to help underserved kids. Thanks."

If You're Going To Steal...

Within minutes, Ellis' Twitter followers were quick to point out that while Coldstone was UNDENIABLY guilty of the offense, they didn't even manage to trace the original work correctly. I mean, it's kind of a no-brainer, right? If you're going to go to the trouble of tracing someone else's cartoon, at least make sure it's done correctly and doesn't look like a five-year-old's attempt to color within the lines.

Similar to the response on Instagram, Ellis' followers were disgusted that a large corporation with millions at their disposal would take advantage of a popular artist instead of actually paying him for his services. "I can not stand to see an artist work hard just for a big company to steal and alter their work because they feel like they have the right to do so," tweeted one of Ellis' followers.

Do The Right Thing

Thankfully, Coldstone stepped up to the plate and owned their mistake instead of sweeping it under the rug and discounting Ellis. Nearly a week after the former Buzzfeed first noticed the theft, he took to Twitter to announce that Coldstone donated $10,000 to Inner City Arts. "I'm glad they did the right thing!" wrote Ellis.

While Ellis' supporters were pleased that he even stood up to the ice cream giant in the first place, many were overjoyed to learn that the corporation actually responded to the artist's demands. "This is wonderful," wrote one follower. "I think that they could afford more, but it is still a substantial donation. I hope that they do it again next year (and again and again). Kudos for getting this to happen."

While there's no denying that Ellis made the best of a bad situation, many of his followers voiced their disgust over Coldstone's refusal to publicly apologize. Also, a donation is not the same as paying an artist, so many fellow members of the art world were upset that perhaps Ellis was sending the wrong message. Artists deserve to be paid, period. Donations don't pay the rent or the electric bills.

In response to the claims that he should still demand payment for his work, Ellis reassured fans that he wasn't hurting for the money. "I'm lucky to have a fruitful career in the arts, so I don't really need them to pay me for this infraction," he wrote.

While I definitely applaud Ellis for forcing Coldstone to turn out their deep pockets for a good cause, I also believe that his insistence against an invoice was the wrong move to make. Just because HE has been successful in the art world and can flex his glamorous life on Instagram does not mean that every cartoonist is in the same financial position. Plagarism is wrong, and a $10,000 donation doesn't erase the theft. If Ellis was a lesser-known artist, I'm certain that Coldstone wouldn't have coughed up the cash.