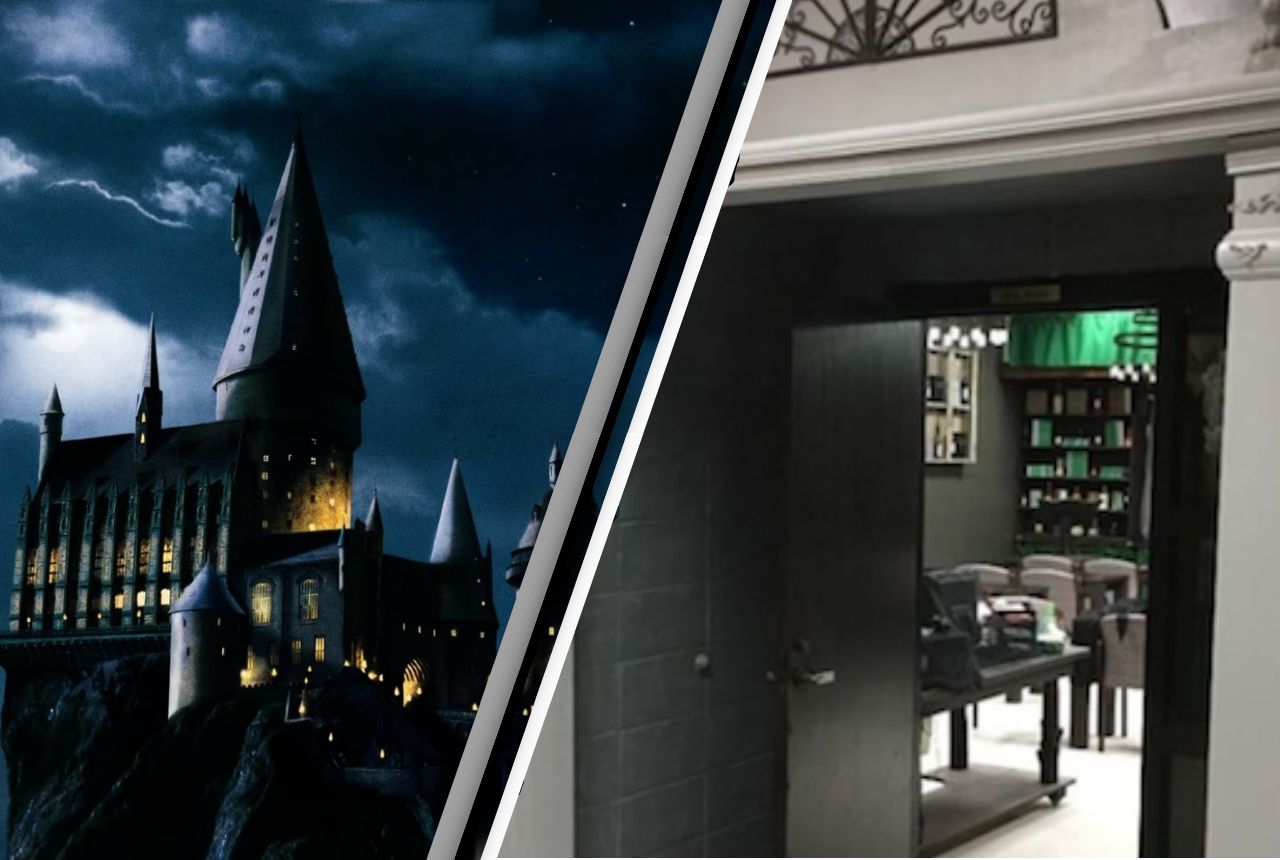 No kid wants to wake up early for school. Unless it means going to Hogwarts. That’s why at one Alabama school, two very cool teachers turned their classrooms into Hogwarts...

It’s the most horrible time of the year. The time that every kid dreads as summer vacation winds down. Back-to-school time. Who wants to trade in playing outside all day (or playing video games inside all day) for going back to a classroom? No one, that’s who.

Even the most studious bookworm dies just a little inside when August rolls inexorably toward its scholastic conclusion. What’s a teacher to do to get kids excited about coming back to school? Two educators in Alabama figured it out.

Parkside is a K-8 school in rural Cullman County, Alabama. It’s a Title I school, which means it receives financial assistance so that kids who come from low-income families are able to receive a high-quality education.

Jacy Douglas and her co-worker, Tracey Jones, are teachers at Parkside. They’re also pretty big “Harry Potter” fans. Which is good because any junior-high teacher who isn’t a “Harry Potter” fan probably can’t be trusted.

Last year, Douglas and Jones decided to design their classrooms around the J.K. Rowling series. Douglas, an English teacher, chose a House Ravenclaw-inspired common room. And Jones, who teaches math, turned her classroom into a Slytherin space where even Draco Malfoy would be comfortable doing multiplication tables.

The classrooms were a hit. Both the Ravenclaw common room and the Slytherin classroom look as though they were taken straight from the pages of J.K. Rowling’s wizarding series. From painting the Deathly Hallows mark on a wall to framing bookcases in silver and green, both rooms are every bit Potter-approved.

This year, Douglas and Jones took it a step farther. With the help of parents and students, the teachers expanded their Harry Potter classroom makeovers into the hallways. Because what’s the fun of immersing yourself in the Hogwarts experience if it’s only behind closed doors?

And they did it on the cheap. The project was completed almost entirely with funds raised by the school’s 5K race. And everything the race couldn’t cover came out of the teachers’ own pockets. So if you’ve ever doubted a teacher’s commitment to their students, just remember how far these two went for theirs.

Other items they couldn’t raise the money for were donated. Or transformed from inexpensive materials, like the streamlined desks in Jones’ math class. Those she repurposed from discarded school shelves and donated two-by-fours. The riser in the back of Douglas’ room was built from materials donated by Walker Brothers LTD, a building supply store in Alabama.

Luckily, Douglas and Jones had some talented people who were willing to help out. Like Aaron Sullivan, a local artist who had already painted several murals at Parkside School over the years; and Douglas’ former student, Donna Gifford, who turned one of Douglas’ classroom walls into a Ravenclaw tribute.

The entrance to Douglas’ English classroom is better known as the Ravenclaw classroom entrance. From the “Harry Potter” quotation on the door to the frame of books being held together with seven tubes of construction adhesive, Douglas’ entrance would surely make Luna Lovegood proud.

Then there’s the entrance to Slytherin math. The gargoyles. The fancy “ironwork” above those sleek, grey columns. The tiling around the door that looks like the walls of a hidden dungeon (one that could be home to a killer basilisk, for instance).

Hagrid’s Gryffindor hut leads the way into science. Fitting, no? Hagrid’s Care of Magical Creatures class served as its inspiration. Sullivan came in with the artistic assist, while the roof and sides of the hut were upcycled from a former classroom project.

If you’re looking for history, look no further than the Hufflepuffs. While this particular teacher had no interest in transforming the actual classroom — maybe they’ll come around next year — Douglas and Jones still felt it important to give the Hufflepuffs some proper representation. So they did, with this herbology-themed entry.

But they didn’t stop at just the four Hogwarts houses. In fact, there are tons of details throughout the hallways and classrooms that pay homage to different aspects of the “Harry Potter” series. Take this “skylight,” for example, which was created with fairy lights on an acoustic-tile ceiling to mimic changing constellations.

They expanded to Platform 9 3/4, which was something the teachers had wanted to do since they started out on the project. Could this luggage cart be any more perfect? Just look at Hedwig in her cage, ready for brand-new year at Hogwarts. Just don’t bring up the Battle of the Seven Potters.

They also gave the ugly maintenance doors a magical facelift. What’s the solution to a general eyesore in the middle of a junior-high hallway? Tack on some heavy-duty hardware and frame it with Hogwarts notables. Now that eyesore is suddenly a bonafide castle entrance.

They made sure the Hogwarts founders kept a proper eye on the locker situation. While Douglas has gotten a good amount of attention for her documentation of Parkside’s  Potterization, it’s really Jones who should be getting the majority of the credit. After all, she’s the craft master who’s responsible for creating these founders portraits, on top of so much more.

And they created their very own magical library. Because it isn’t like “History of Alchemy, Magic and Potions” is readily available on Amazon.com. Or how about “The Monster Book of Monsters”? Those things don’t come along very often, and they’re probably a real pain to ship.

They even included a tribute to Ollivander’s Wand Shop. Magic wands aren’t cheap (I’ve been to Universal Studios; I’ve done the Interactive Wand Experience), so props to these teachers, who’ve somehow managed to create their very own mini version right next to the lockers.

But not everything the Parkside teachers have done is all fun and games. Because the “Harry Potter” series is full of darker magical elements as well. So Douglas and Jones wanted to make sure to represent those just as they had with everything else.

“The Standard Book of Spells, Grade 3” isn’t exactly child’s play, you know. The bedazzling hex? The dancing spell? Certainly not for the faint of heart. And this little spellbook is only the tip of the magical iceberg as far as dark “Potter” stuff is concerned.

Douglas even has shelf of Horcruxes. It comes complete with a homemade Nagini, who splits her time (literally) between Douglas’ classroom and the one behind it. There’s no Harry on the shelf yet, but that doesn’t mean there isn’t time to collect one.

A dementor haunts the school’s hallway. Which is made out of cardboard tubes and a pool noodle (plus a little duct tape and a liberated skeleton hand from the science lab). But they actually built a dementor out of craft supplies. I’m 100-percent hitting them up this Halloween.

The Hogwarts hallway displays had their official reveal at Parkside’s open house. Douglas and Jones (and the rest of their crafty volunteers) spent the entire summer putting together their “Harry Potter” entryways. While the students had a chance to see everything on the first day of school, their parents had to wait.

Kids and parents reacted pretty much exactly how you’d think they would. Could you even imagine getting to actually go to Hogwarts? A good number of parents at Parkside are probably Harry’s age, so of course they’d love this just as much as their kids do.

And with the results Douglas and Jones have gotten because of it, it looks like they won’t be stopping any time soon. Douglas has said that, since transforming the classrooms, there’s been a huge decrease in disciplinary issues, and kids have been much more interested in books and reading. Potterizing the hallways will certainly only add to that sense of engagement, and those hallways are just a small portion of the entire campus.