This Couple Adopted a Bear and Think of It as Their Own Flesh and Blood… But Was It a Big Mistake?

Camila Villafane
This Couple Adopted a Bear and Think of It as Their Own Flesh and Blood… But Was It a Big Mistake? November 7, 2018 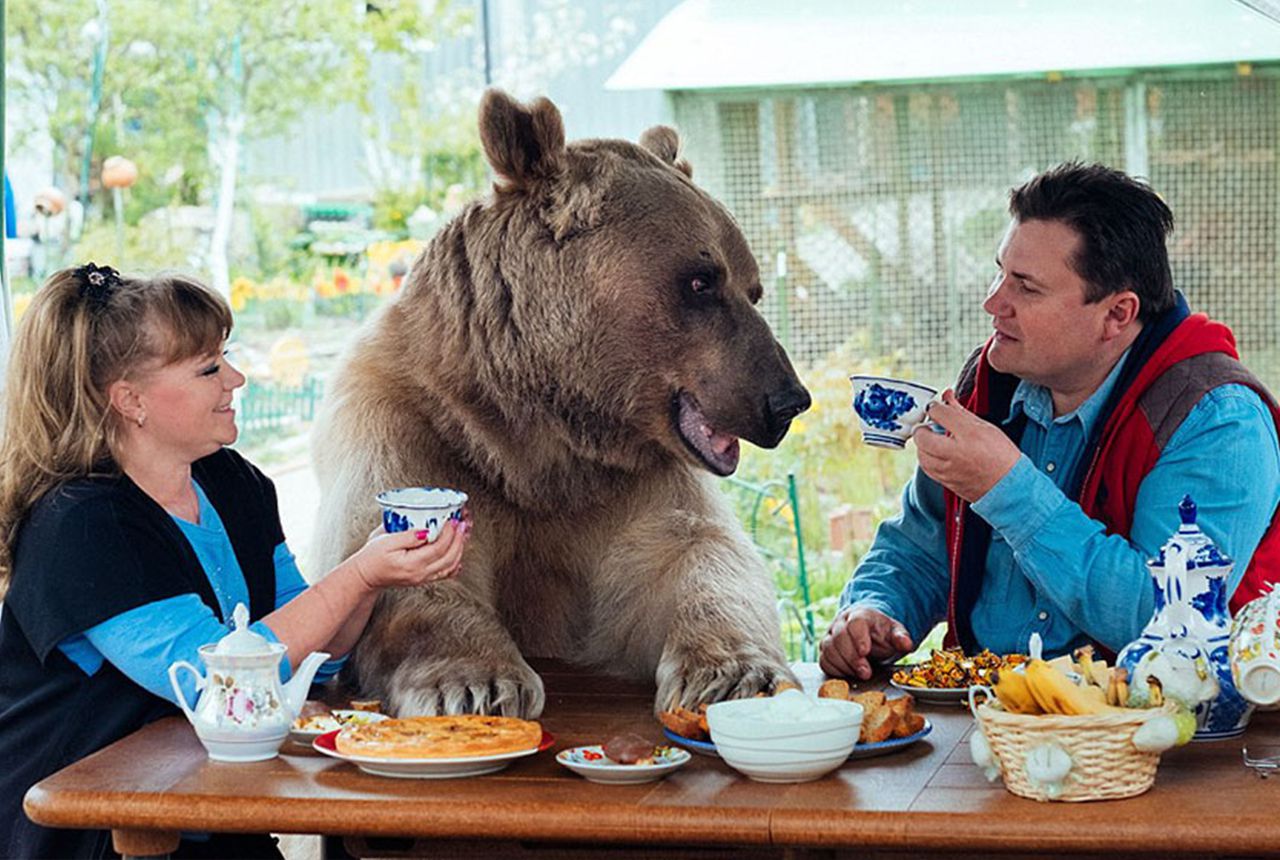 Have you heard of Stepan the bear? Even if not there’s a good chance you’ve seen this gentle giant's photos. But was it really the right call when a Russian couple adopted a bear? Or was it only a matter of time before they had their last meal together?

Svetlana and Yuriy Panteleenko may seem like a typical Russian couple. The Moscow residents eat dinner at the same table and watch TV together. They have a loving relationship, and enjoy doing pretty much everything together. But their son is a different story.

Like most couples, the Panteleenkos decided to expand their family, and they were so glad they did. Now, they have a son named Stepan who’s in his 20s. But let’s just say, he’s anything but ordinary.

Stepan is the kind of son that most parents dream of. He helps around the house and waters the plants in the garden. But he has a bit of a sweet tooth, which he simply can’t ignore, and neither can his parents... for their sake. After all, Stepan isn't your average 20-year-old!

A Bowl A Day

Stepan’s favorite dish is a can of condensed milk. With a couple of slurps, he’ll lick a bowl full of porridge clean in less than no time. But the Panteleenkos know they have to keep his hunger in check...or else! You just never know when something could go wrong, right?

Dinner at the Panteleenkos’ can be a real mouthful. Besides porridge, Stepan consumes 25 kg of vegetables, eggs, and fish. But he still manages to look paw-some for his size. But how does he do it?

It helps that this big boy is a major football fan! Tossing the old pigskin in the backyard with his old man keeps his weight in check. It’s hard to believe the Panteleenkos nearly missed their shot of being Stepan’s parents, and we mean that literally.

As you probably figured out by now, Stepan isn’t the Panteleenkos’ biological kid. They adopted this beautiful creature when he was three months old, and it was a good thing they did, or he might never have survived alone. Today, his life is so much better. And his true nature remains in check...or does it?

A Creature Of Many Talents

His parents love to brag about how talented he is, and who could blame them?! But if eating was also a talent, Stepan would be the ultimate winner. He loves a good picnic, and his adoptive parents often wonder how he hasn’t gobbled them out of house and home.

Spending some quality time with the family is as important to Stepan as it is to his parents. They’re like the perfect little family who loves to read books, play chess, and takes tons of selfies. But are the Panteleenkos doing more harm than good? A lot of people seem to think so!

Stepan loves performing like the big boy that he is. But some people have criticized the quirky Russian couple for ignoring their son’s true nature. And they may have a very valid point.

Call Of The Wild

As a grown-up, Stepan should have been doing things like looking for a mate, or foraging through the forest instead of posing with models and officiating at weddings. But Stepan might feel differently...

Most of us wouldn’t feel comfortable sitting at a table with a 300lb bear for dinner, because he would obviously make us his meal. But the Panteleenkos enjoyed many dinners with their adoptive son without a single scratch. Then again, he owed them his life.

He Was In Danger

Hunters had taken Stepan’s mother from him, and at just three months, he faced the same danger. That's when the Russian couple adopted Stepan and changed his life forever. However, it was only a matter of time before he outgrew his human family.

Stepan is over seven feet tall, but he's totally domesticated, so, he often sits down with the Panteleenkos to watch TV at night and spend some quality time together. And they never have to worry about his temperament either!

Like most parents, the couple has learned to gage their adoptive son’s temperament. He’s always so gentle and loves to cuddle with them on the couch. But is his presence unbearable sometimes?

You’d never expect a bear and a couple of humans to get along this well. But the bond was formed at an early age when Stepan was in really bad condition. So, it makes sense that he warmed up to his folks. And now, he's just a loving ball of fur. Granted, he's a 300-pound ball of fur! But could he ever use his impressive build to hurt the people who raised him?

Bears get a bad rap for being aggressive, and with good reason. Wild bears are supposed to be aggressive if they feel threatened! That's the only way to guarantee they'll live another day. But Stepan has proven people wrong. His human family assures everyone that he has never bitten them, not even as a child. But would you leave your kid alone with him?

Stepan has become so popular that his family has allowed him to cuddle up to children in the woods for sporadic photoshoots. But this isn’t the only photo of Stepan hanging with a youngster.

Stepan doesn’t mind if human children want to pose or frolic around him. He’s happy to show how well behaved he is. It’s a testament to his paw-some upbringing. And now, he's nothing but a real Care Bear.

We’re not exactly sure if this is recognized by the law, but this Russian couple decided to get married anyway, and they had Stepan officiate at their outdoor wedding. But this has really given people something to think about.

Did They Exploit Him?

Regardless of how the Panteleenkos have nurtured Stepan, the fact of the matter is, he’s still a bear. But this hasn’t stopped people, particularly in Russia, from exploiting these creatures. And it’s ruffling some feathers.

Not In His Best Interest

Lisa Wathne, captive exotic animal specialist and spokesperson for the Humane Society of the US, told Cosmopolitan, “It’s truly disturbing and certainly dangerous for the people involved and absolutely not in the best interest of the bear.” So, did the Panteleenkos delude themselves?

Many things could have gone wrong when the Russian couple adopted a bear. But much to everyone's surprise, nothing actually happened! And for over 20 years, Stepan lived among them as a human. In many ways, Stepan has proven over an over again that he's beyond trustworthy. But was this a dangerous move or a selfish one?

The Wrong Way To Domesticate

Wathne explained the obvious reasons why adopting Stepan was a bad idea. “Obviously, this bear is a huge animal, he’s a wild animal, despite this couple’s claim. Having a bear live in your home is not how an animal is domesticated.” But it’s hard to argue with the results.

Who Wants A Bear Hug?

Some of the kids Stepan posed with were terrified at first, but they soon realized he was just a big old teddy bear. We doubt many kids would ever refuse a bear hug! The Panteleenkos sure couldn’t.