Couple Finds Exhausted Animal In The Middle Of The Lake

Harvey Shepherd
Couple Finds Exhausted Animal In The Middle Of The Lake July 16, 2019Leave a comment 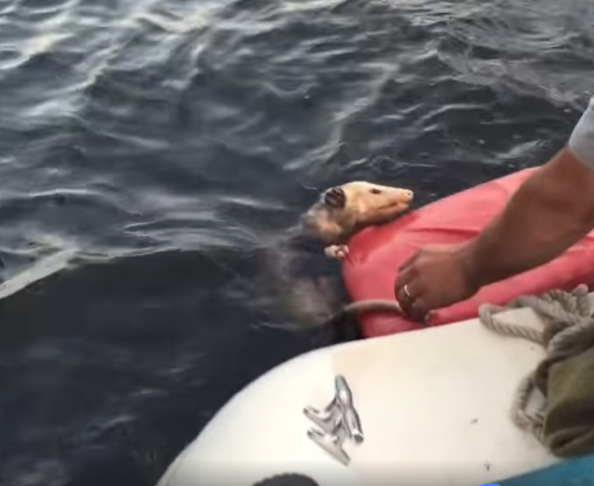 The woman in this picture Char and she is a professional chef. Char is going to be the star of our story because she is the one who finds and rescues the opossum in the middle of Lake Michigan.

When Char is not cooking delicious meals and appearing on TV shows, she and her husband love to go out on Lake Michigan with the boat and leave the noise of the crowded city behind.

Char says that her favorite weekends are when she manages to get the entire family on the boat and they take a ride on the lake. At that moment, she doesn't need anything else other than a cool drink and a hat to keep her shade from the hot sun.

We should mention that Char and her family don't just ride the waters of Lake Michigan with the boat, they also gather all trash that they find floating in the middle of the lake. Aren't they amazing?

During a normal weekend, Char's husband spotted something strange floating in the water. This wasn't any regular thrash because the "thing" was moving. At that moment, he knew that he had to do something about it.

To Char and her husband's surprise, the floating thing was an opossum. How did this little animal find its way in the middle of the lake? Something strange was definitely going on.

Char knew that opossums are not great swimmers and that this little fella must be tired so she threw a life vest to overboard. The surprising thing is that the opossum climbed the life vest as soon as possible.

As some of you might know, opossums are not too friendly with people. They get scared and if they don't try to scratch, they will certainly run away. This is why Char's husband needed to slowly get closer to the tired animal.

The opossum was so tired from swimming all the way towards the middle of the lake that he didn't even try to run away from Char's husband. The man was able to simply pick the little animal up and take him to safety.

From the looks of it, the opossum has been out on the water for at least a couple of hours. He was super tired and once it reached safety, he laid back and started catching his breath.

The little animal was so exhausted that he fell asleep in less than 30 seconds. Can you believe that? And to think that Char was fearing that the opossum might try to run away.

Now that the opossum was safe, Char and her husband needed to drive their boat towards the shore before the little animal could wake up and cause trouble.

Char and her husband are life savers and there is no doubt about that. The opossum would've suffered a grim faith if Char didn't help him out.

The opossum woke up from the noise caused by the boat's engine but he didn't try to run away. He simply stood still and waited for the boat to get closer to the shore.

Luckily, the boat is quite fast and Char's husband got to the shore in only a couple of minutes. The little animal was finally ready to get back to his family.

4. The Opossum Is Thankful

The opossum didn't just run away as soon as he landed on shore, he stayed around for one minute and looked at Char. This was his way of saying "thanks for saving me guys".

Let's hope that the little fella managed to find his way back home where his family is surely waiting worried for him.

We have to give praise to Char and her husband for deciding to save the helpless opossum. They could've just driven past by him, but they didn't.

We think it's safe to say that the opossum learned a valuable lesson that day. He is never going to go swimming that far ever again.