Jen Arbues
Creepy Trail Cam Photos That Will Make You Want to Stay Inside Forever March 8, 2019 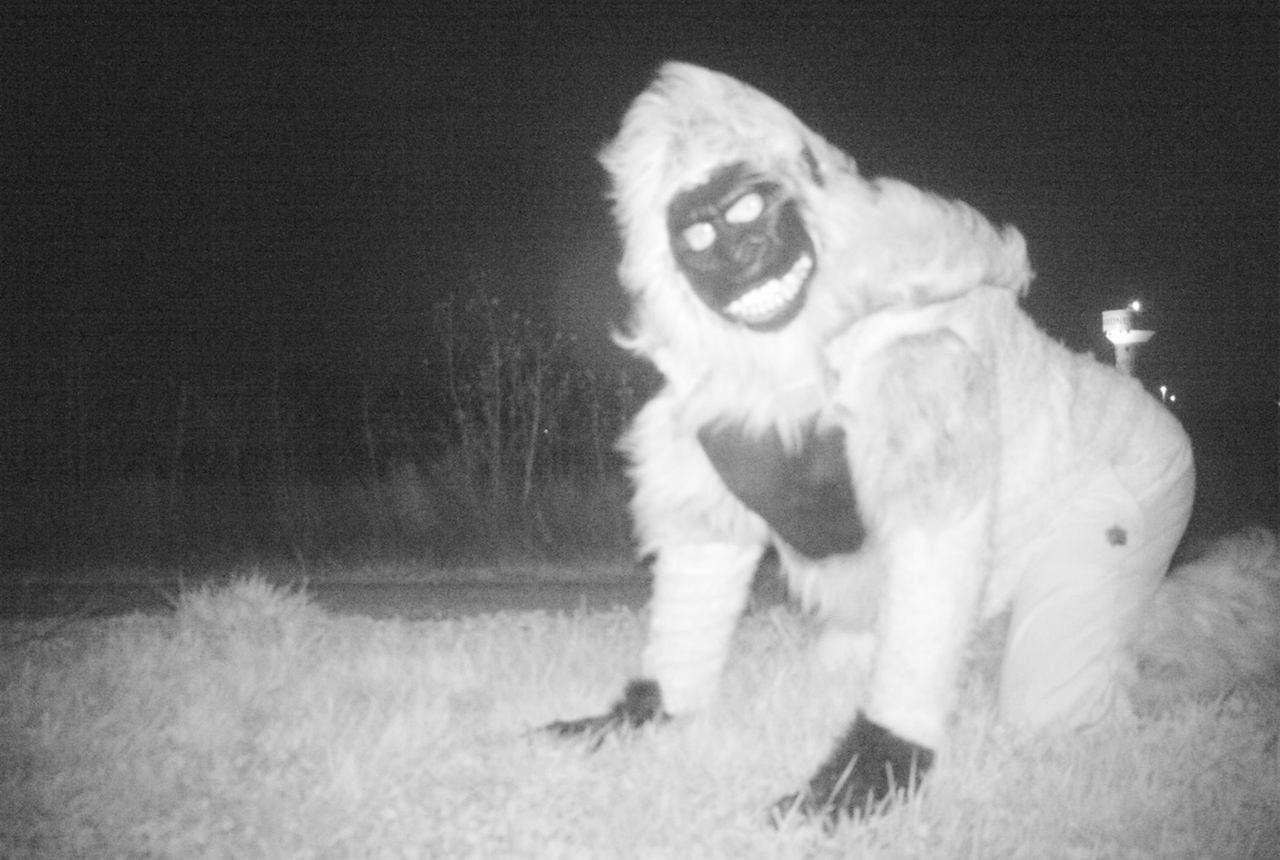 Hunters and researchers use trail cameras to document wildlife. But sometimes, interesting wildlife turns out to be a lot different than expected. These creepy trail cam photos prove there really are things that go bump in the night. So we're OK with never, ever going into the woods alone...

The Ghost With the Most

This gem of a creepy trail cam photo captured in 2010 shows a humanoid creature crawling toward the camera. Creepy AF, right? But the whole thing turned out to be a marketing stunt for a horror film. Still, it remains one of the creepiest images out there.

There are so many questions here that demand answers. What is this child doing out alone in the middle of the night with only a blanket? Are these deer with her, or did they all happen upon each other at the trail cam site? And why does it feel like we’ve interrupted something?

It’s a little hard to make out, but it kind of looks like this figure is posing for the camera. That's weird enough on its own, but why are they dressed like they’re headed to some sort of secret ritual? Probably because that's exactly where they're going...

The internet is divided about the authenticity of this trail cam photo. And we understand why. But even if that strange, winged animal off to the right were Photoshopped, what exactly is that deer on the left running from?

This is exatly the type of person you don't want to meet in the middle of the woods at 1 o'clock in the morning. For one thing, his posture isn’t exactly welcoming. And secondly, it definitely looks like he’s lost his shirt and somehow found himself covered in a dark substance.

In Limestone, New York, a guy named Charlie Johnson caught this random roaming clown on his trail cam. There are so many questions. What was a clown doing in the middle of the woods? Is his suit filled with air? Did Johnson burn the camera immediately after capturing this?

This image was taken by an automatic trail camera somewhere in Wisconsin, and that’s the only explanation the Reddit user who posted it has to offer. According to some comments, it’s actually a deer or an elk, but really? Have you ever seen a deer walk around like this? Neither have we.

According to one Redditor, “I think this happens when a buck sees another one during the rut and it'll attack even a dead buck. I'll bet the head was mostly chewed off by coyotes before he attacked it.” Still, seeing a deer with the decapitated head of another stuck to its antlers is pretty nightmarish.

The humanoid figure briefly caught on camera in this remote part of Finland disappeared after only six seconds. At the same time, eight parachuters died in a plane crash nearby to the trail cam’s location, so the question remains as to whether this is a survivor or something else entirely.

Redditor Trail_Cam_Guys captured a series of photos over the course of several days, all taken immediately after they had walked away, that show what appears to be a three-eyed creature. One commenter suggested it could be a person wearing night vision goggles, which makes it all even creepier.

The blurry image of this possible person was captured on a hunting camera in the middle of the night. It could be a man walking through the woods, using his cell phone as a light source, but it could also be a ghost, and who are we to question the supernatural?

A friend of Redditor Paradoxou had been studying grey wolves in northern Quebec, Canada when this photo was taken. Standing behind a tree is what looks to be a little girl with a teddy bear and not at all a grey wolf.

At first glance, this looks like a photo of a deer’s head peeking out from behind a tree. Sure, it’s pretty low to the ground, but it isn’t that weird. Except for that thing crawling down the tree right above it.

In Northwest Pennsylvania on September 16th, 2007, R. Jacobs caught three images of an unidentifiable primate on his trail camera. While some have argued the photos are actually of a “mangey bear,” Big Foot enthusiasts argue the anatomy just doesn’t match up.

Sure, it’s totally normal for a girl to happen upon a deer in the woods. If she weren’t alone. And it wasn’t in the middle of the night. And the two of them weren’t caught having some supernatural staring contest with each other.

This girl — and possibly a second person, at the top right of the image — appeared on a single frame of a trail cam set up on a deer trail in North Carolina. Is the man actually with her, or is he following her?

Since there isn’t any time stamp on this image, it’s difficult to narrow down exactly what time of night it was taken. But judging by the lack of light coming from anywhere else, and the person’s bedtime attire, it’s safe to assume it’s late. Which begs the question, where is this person going?

Definitely Not a Bear

Just look at this thing for a second. Quadrupedal, although its four limbs are too long to belong to a wild cat of any sort. It has long, black hair, but it lacks a tail. And it’s 100% not a bear.

While most of the people captured on trail cams seem to have at least some sense that they’re being photographed, this one does not. Maybe it’s because their face is completely covered by that white hood they’ve got on. Or maybe that weird glow around their head is obscuring their view?

No, that isn’t a sabertooth tiger taking a midnight stroll through the woods. In all likelihood, those “fangs” are a result of its photo being snapped mid-movement. But the white streak traveling alongside it? That’s something else entirely.

Fire From the Sky

It might be easy to write this one off as some sort of weird lens flare in the middle of an open field. But what kind of lens flare has a shape that so immediately makes one think of UFOs? Then there’s this…

And the Thing That Came After

A Kansas police department posted several trail cam photos from Gardner’s Celebration Park to their Facebook account that show people in costume doing god knows what. Among them is this woman, who we imagine just wanted to commune with nature.