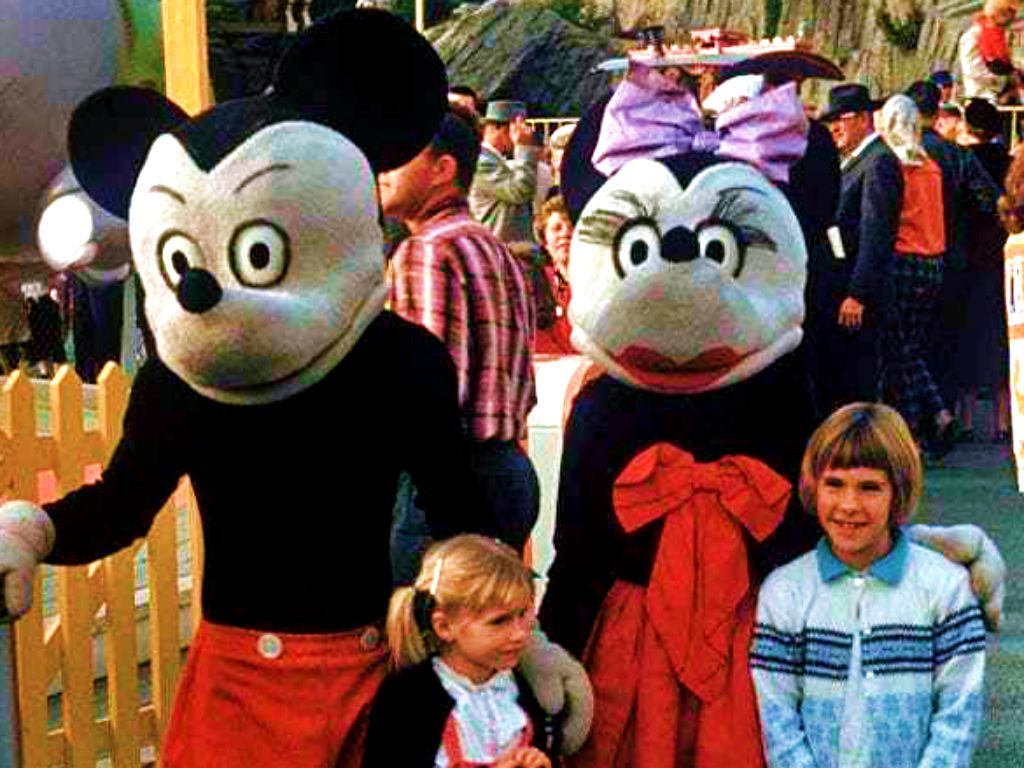 When Disneyland opened in 1955, it wasn’t the standard of character mascot excellence as it is today. Ill-fitting outfits and ghoulish facial features are just a few of the things that will make your skin crawl looking at these characters. In the early 60s’ general admission for adults was just $1.60 and looking at some of these costumes, guests certainly got their money’s worth.

When Disneyland originally opened in 1955, the costumes for Disney’s iconic characters were minimal to say the least. To say a bit more, they were absolutely terrifying. On opening day most of the costumes looked relatively normal, but as they started to wear and tear with every day use, the holes that kept the costumes ventilated looked more like wounds.

Cameras caught this behind the scenes look at the costumed performers preparing for the televised grand opening of Disneyland and it is an eye opener. Not only is the first run of Donald Duck’s costume extremely ill fitting, but the actress playing Mickey Mouse can be seen without her head on! That is one rule that any Disneyland cast member today would never be caught breaking.

Even Walt looks uneasy around his characters! Aside from the thousand yard stares that each of these mascots seem to have in their eyes, their stances make it glaringly obvious that there is a person (or two, in Pluto’s case) inside each one of these uncomfortable costumes who can’t wait to go on break and change their clothes.

In an effort to make Disney’s mascots easily accessible to the children wandering around the park, they were given a makeover to appear shorter and at eye level with children. Unfortunately, this gave all of the characters of that time a short and stocky look that was absolutely frightening when looked at from head on.

The first run of Peter Pan mascots came in the 60s’ with some pretty normal looking Peter Pan performers. But the introduction of his arch nemesis Captain Hook wasn’t quite as convincing. His buggy eyes and grey face with a permanently expressionless glare is unsettling enough without knowing that he has a hook for a hand.

“Pinocchio” has remained one of the scariest Disney films of all time. Children smoke cigars, get abducted and are turned into donkeys in the 1940 film. As if to live up to the movie he stars in, Pinocchio with his rosy cheeks and dark eyes reminds us of all of the nightmares that movie gave to children in the first place.

Some of the earliest iterations of Mickey and Minnie’s costumes were so simple that any child could put them together today. These mascots just wore black turtlenecks and dark leggings under their costumes, barely achieving the appearance of the characters whatsoever, expect for the over-exaggerated faces permanently in a painful looking grin.

Mickey’s deflated face turns the happiest place on Earth into the creepiest place on Earth. Just looking at this photo, you can almost feel how uncomfortable it must be inside that costume. The California sun must bake down on these costumes all day, warping and shrinking them for years, until they look like this.

For the opening of Disneyland, the Three Little Pigs looked not at all little and hardly like pigs. Fifer, Fiddler and Practical Pig look nothing like their cartoon counterparts, but they do resemble a nightmarish barbershop trio who might also be planning a heist of the theme park’s cash registers.

Maybe the reason Dumbo is never seen walking around the Disney parks anymore is that it wasn’t a good idea to begin with. What makes this photo most terrifying are Dumbo’s clown sidekicks, who terrorized the young circus elephant in a scene in the 1941 film.

Disneyland opened with a parade down Main Street, featuring characters from iconic Disney characters of the time, including the dwarves. Somehow, they were designed with differing degrees of creepiness, because Doc looks somewhat normal while Dopey seems to be instilling nightmares into the crowd with his eyes.

If Walt doesn’t look too happy in this photo, its because he had no hand in developing these costumes. This iteration of Mickey and Minnie’s design was done by the folks who produced the Ice Capades, for use in the 1950 edition of the traveling ice show. But there’s still no word on who was responsible for that bargain bin bunny costume masquerading as the White Rabbit.

This angry version of one of the Three Little Pigs seems purposefully made to stare down children in family photos. The strangest part of this photo isn’t the blushing humanoid pig, but that it was taken in front of a branch of Bank of America that was surprisingly located inside the Disneyland theme park.

Grandma, watch out behind you! There used to be a time when Disney characters roamed the park freely, without designated areas to be confined to. This policy was obviously changed due to crowd control, but that sadly put an end to hilarious photo-ops like this one.

The design for this costume originally had brown eyes, but due to age and sun exposure, most photos of Winnie the Pooh in this era seem to have demonic glowing red eyes. But, the reason the costume was ultimately redesigned was because the arms in the costume were simply sewn on and couldn’t be moved. It’s nice to know that this walking nightmare couldn’t shake your hand while he stared you down.

Due to the lighting and angle of this photograph, it seems more likely that it is a shot from an old horror movie instead of a family photo from a theme park. Minnie’s huge expressionless eyes and equally menacing realistic lashes make her seem to be a terrifying presence, not a comforting one.

This costume was made with the performers vision in mind, so the designers placed eye holes in the eyes of the character. The result is what looks like a mask fit for a horror movie villain. Nowadays, the Fairy Godmother is played by character performers in makeup.

Even in the 90s’ Disney was still churning out strange mascots. This funny faced Scrooge McDuck was a short lived character in the parks during a “DuckTales” promotional pop-up, so there aren’t many photos of him around. But surely someone must have noticed his hilariously open and frowning beak during the design process.

The older mascots tend to look creepiest in photographs because in order to give the character performers visibility in the character heads, the eyes were made slightly translucent. That is what is giving Minnie the appearance of having dark grey eyes that seem to stare into your soul.

It’s not a good sign when the mascots appear to be melting under the hot sun in the parks. Grumpy’s sunken-in face and angry expression are seriously off-putting. The small black pocket in the hat was where the character performer could see out of the costume and that knowledge somehow makes this costume that much creepier.

The redesign from the original Three Little Pig mascot costumes was even more terrifying than the first run. The added height to these characters makes them seem to loom over guests menacingly and there is just something disturbing about their huge, bald bobble heads.

The first appearance of creepy Disney mascots was in 1937 at the red carpet for the premier of “Snow White and the Seven Dwarfs.” In all fairness, these designs were modeled off the plush Mickey toys that were popular in the day, but that might just add to the fear factor. This is literally what toys would look like if they got up and started walking!

The oversized heads of this era of Disney costumes were made to look more cartoonish by bobbing up and down as the performers walked, as they might in a movie. But considering that this costume didn’t have moveable arms, just the thought of seeing it walk around is frightening.

When talking about the evolution of the theme park, Walt Disney was once quoted as saying, “Disneyland will never be complete.” As long as there are nightmare-inducing mascots in the park, we will consider the park to be unfinished, too. At least we know that Walt couldn’t stand these guys, either.