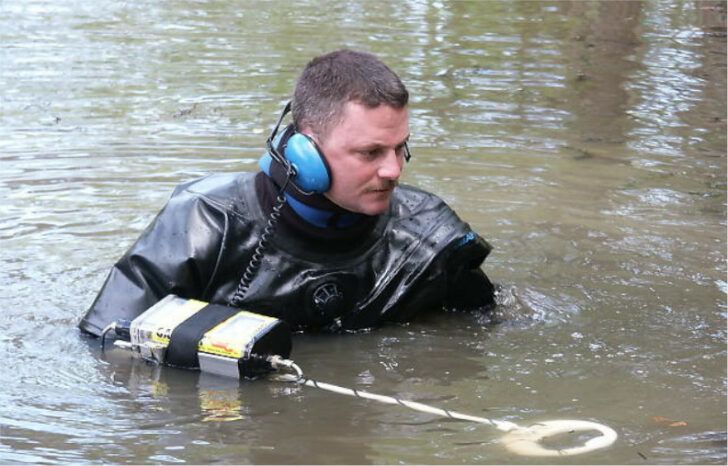 Diving is an awesome hobby, and the great thing about it is that you can explore the underwater world and maybe even find some treasures in the murky waters. This is exactly what happened to a man named Luke Berube when he decided to explore a lake in Hanson, Massachusets. He has been doing scuba diving for 13 years, and one day, he decided to dive with a metal detector and see if he would find some lost treasures.

He had no idea he was that lucky!

Luke Berube loves to explore the underwater world and one of his life-long wishes has been to find a treasure. It became his hobby while he went scuba diving and he’s been quite successful in finding some valuable items!

2. His Luck Would Soon Increase

So far, Luke found some coins, platinum jewelry and even a shoe buckle that was over 300 years old! But he didn’t expect to find a very old item and what makes his story more unbelievable is that he even got reunited with the owner.

Part of the fun in discovering lost artifacts is to reunite them with the former owners and find out more about them. With that in mind, he headed to a lake as part of a short adventure. In his blog post, he recalled how that day began…

4. Luke Has Had Some Unproductive ‘Hobby Hunts’

“So for the past month my hobby hunts have been rather anti productive other than a few old silver coins which is some what depressing,” he explained. However, he didn’t lost his hope and prepared another journey to a local lake.

Little did he know he’d be more than productive that day!

Luke said he “decided to go on a short road trip about an hour away from cape cod to an undisclosed location/pond I’ve never dove before.” Having his gear in place, he started looking for some buried treasure first at the shore and then he got underwater…

6. Searching Through the Murky Waters

He was diving deeper in the lake, pointing his metal detector towards the murky bottom of the lake when it started turning! He was wondering if he found more lost items, hoping it was another piece of jewelry.

“Right off the bat I hit a brass signet ring that looked like gold but unfortunately was not (still a ring and a decent start) so I kept going after a couple hours my air was getting low…” explained the treasure hunter. However, hours passed and he had to go back to the cape and leave metal detecting for another day. Then, his metal detector went crazy!

8. His Discovery Made Him Famous

Before we show you what he discovered, we just have to say that his find is so amazing that even the local news reached out to him to cover his story. Then, more journalists came to the lake to take some footage and that’s when they revealed Luke’s treasure and the rest of the when he meets the former owner of the lost item!

Back to Luke’s find, when his metal detector started beeping like crazy, he took a leap of faith and tried to make the most out of his little air supply. He recalls he “started digging and fanning the muddy silt on the bottom, I reached my hand in the hole and grabbed a handful of muck but felt an unexpected target…”

He felt like the thing covered in muck was a ring, and after he surfaced and took a deep breath of fresh air, he got on the shore and began cleaning the items he found that day. He was looking at the first brass ring, and then he cleaned the other one. That’s when he realized that the second ring was very old. It had some inscriptions that helped him learn about the owner that lost it!

The ring read “Gate of Heaven,” and had the initials “WJW” etched inside the band. So he went home and started researching, thinking that with the clues offered, he could learn more about its origin.

What makes his story very interesting is that he stumbled upon the owner not in old records, but on Facebook!

He found out that “Gate of Heaven” was the name of a Catholic high school in South Boston. The problem was that it has been closed for nearly a decade and it was also demolished. But on Facebook, he discovered a group of the alumni and he gave it a shot and left a message with the photos of the ring…

He thought it was indeed a long shot and the years 1960 engraved on the ring meant the owner was very old and they probably didn’t even have a Facebook account… But oddly enough, a few hours later, a woman contacted him!

Christine Wadel spotted the post on that Facebook group and couldn’t believe her eyes when she saw the WJW initials! You see, her father’s name is William Joseph Wadel, and he had this ring after her graduated Gate of Heaven in 1960!

According to her message, her father lost the class ring when he was young and he never found it! Christine told the local news that she texted her father and asked him about the ring he lost, sending him photos of the ring…

Here’s how the texts between Christine and her father looked like:

"It's been found!” (she sends the photos)

Laughing at how her father reacted, Christine texted Luke photos of her father’s Gate of Heaven diploma and a high school photo so prove he was the owner of the ring. They she met Luke and recovered the lost ring!

Both Christine and her father were happy they recovered the ring and when Luke met Christine, he saw how much happiness he brought into the lives of some people he’d never met:

Bill Wadelsaw the ring and the teenage years finally came back to him, recalling how he lost his ring:

“I gave it to my high school girlfriend in the late 1950s, and she somehow lost it but wasn’t sure where. After that happened, I figured it was gone forever,” said the old man in an interview with The Washington Post.

The old man thinks that his high school girlfriend probably went swimming and lost the ring in the lake, admitting that “it’s unbelievable to think that my old ring was sitting in a pond for six decades, and Luke found it. What are the odds?”

Luke Berube always dreamed of finding lost treasures and he also likes to go metal detecting on the beach. He took up treasure hunting after he started diving in his spare time after work.

For Luke, diving helps him relax and get away from the noisy city life:

Now that Luke Berube has found a gold ring, he wants to find even more treasures. He already set his eyes on a murky lake that no one has explored yet and he wants to make that his next "treasure hunting spot".

And a lot of people started calling him, asking him to find their lost items!

23. A Story Waiting to Be Revealed

"Every ring has a story attached to it,” said Luke, adding that he really loves looking for rings underwater. He then revealed that he’s found a lot of rings in the past years:

“I also find a lot of trash — beer cans, pop cans, old cellphones, big chunks of metal. So to find a class ring was something special. And it was rewarding to me to know that this story would have a happy ending.”

24. The Daughter Speaks Out

“I was impressed that he went to so much time and effort to get that ring back to my dad,” said Christine. “Luke’s kindness and generosity is incredible," she added, eager to go back to her father’s and present him his ring!

When Bill Wadel saw the ring, he couldn’t stop smiling!

We have to give praise to Luke Berube once last time for deciding to do a good deed and return the gold ring for free.

The old man got his ring back and he couldn’t be happier about it, plus Luke is also pleased that he’s crossed one wish off his bucket list: “this type of recovery/return has been on my bucket list for years and I finally managed to pull it off.”