Alex Shea
The Story Behind The Dog Born With An Extra Tail is Astonishing November 22, 2019Leave a comment 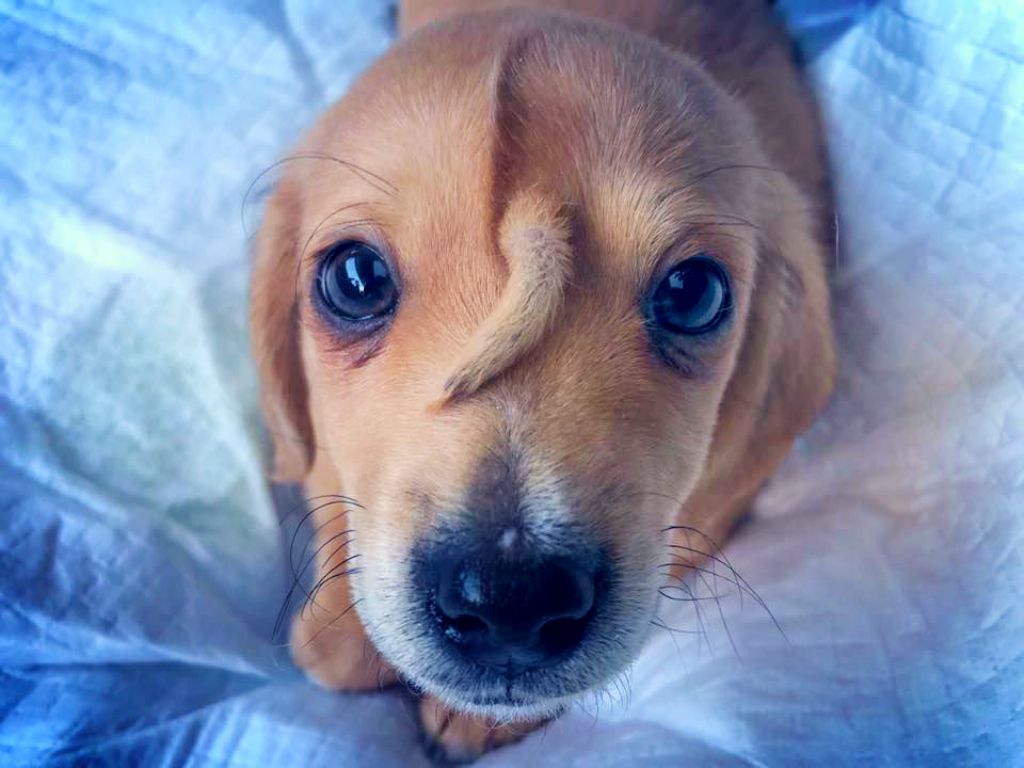 This perfectly healthy puppy has the slightest abnormality. He happens to have an extra tail. But this physical feature isn't on his bum, it's on his head.

The woman who rescued him actually saved his life, and were it not for the attention he received for his extra tail, he (and a few other dogs) might not be here today.

Not Your Ordinary Puppy

It Makes Him Rare

While this doesn't take away from his functionality as a pup, it sure does bring a lot of extra attention his way. He's just a 10-week-old ball of cuteness who happens to have a special physical feature no other puppy has.

Thanks to Miracle Workers

Narwhal was rescued by Mac's Mission, a nonprofit that focuses on helping pups with special needs. They got their start with a 4 pound, 3-month-old pup named Mac who ended up having some pretty serious genetic complications. So, a nonprofit in honor of pups like Mac was created and has given thousands to animals in need.

Her Friends Knew Before Anyone Else Did

Rochelle Steffen is the founder of Mac's Mission over in Jackson. Narwhal has been in her care since a few of her friends tagged her in a Facebook post of a pair of abandoned dogs. Her friends knew this pup was the kind of special that only Rochelle knew how to take care of.

Mac's Mission's goal is to take care of the dogs that would die without being rescued. Their nonprofit specializes in "special" and they take pride in that. Even with all of the odd things they see, Narwhal's extra tail was an oddity they haven't had the pleasure of encountering— until now.

Odd Ones Out Are in Danger

Dogs with deformities like clefts or other traumas are usually the first to get euthanized in a shelter. Not many people want the responsibility that comes with taking care of something that requires too much attention. The founder of Mac's Mission saw how underfunded and under supported these animals were and closed the gap.

He Was Almost Named 'Wiper'

Steffen initially wanted to name the pup with an extra tail Wipers if his tail wagged. But, unfortunately, his tail doesn't wag. Which is where the name Narwhal (one of her other favorite animals) came from. It was kismet. Everything was falling into place.

Not the Only One After All

Unlike the narwhal whale, which has a protruding canine tooth that resembles a tusk coming out of his head, Narwhal's tail on his forehead is short and stubby and happens to flop from side to side. It's sprouting right between his eyes and doesn't hurt him at all! He also has another tail— this one is just an extra one that makes him special.

Getting the Worry Out of the Way

Narwhal had X-rays done on November 12 of this year and as far as the exam was concerned, there doesn't seem to be anything medically wrong with him and the extra tail on his head. It serves no purpose except for making Narwhal the cutest rescue puppy in the world. As long as it stays a third of the size of his actual tail, there's no real reason to cut it off.

No, It Doesn't Wag

Even if the unicorn tail on his head makes him the cutest puppy in the world, it doesn't do much else. In fact, he doesn't even know he isn't supposed to have an extra tail. As far as he's concerned, he's just like every other puppy. Which is the way it should be.

Turns out Narwhal wasn't the first, or the only, puppy to be abandoned. There's apparently a dump site in rural Jackson, Missouri where hundreds of other dogs have been dumped in the past. It isn't pretty, but at least there are people out there like Steffen to help the abandoned puppies.

But They Have a Knack For It

The Facebook page for Mac's Mission has grown up to 500,000 followers. Everyone who does follow them on Facebook and volunteers for their events understands their "pitbull strong" mentality. Being pitbull strong is a way of life, a way of living life to its fullest. That's what they hope to encourage by helping the animals who need their help the most.

Narwhal Was Found With Another Dog

After going to the vet, Steffen found out that Narwhal might be a Dachshund and Beagle mix. It's always tough to really know with rescue puppies. But they found an older dog at the same time, which they assume is Narwhal's father— who happens to be a Dachshund mix. What we know for sure is that Narwhal is an adorable rescue puppy who gets a chance at a better life.

Helping More Than Himself

He's also helping various other animals that are a part of Mac's posse. As a grassroots campaign that lives and breathes on social media, this newfound attention from Narwhal's second tail is providing a spotlight this rescue organization needs. It has allowed for countless people to get a glimpse into their amazing rescue mission.

Getting Along Just Fine

Narwhal has even made friends with the bigger dogs. He's bouncing and playing around just like any other 10-week-old puppy. He hasn't shown any signs of slowing down and why should he? He's just as normal as any puppy.

The Ugly Side of It

But this cute extra appendage could actually be Narwhal's parasitic twin. It's a lot to think about— a twin not being fully developed and becoming an extra body part on the sibling. Having an identical twin is incredibly rare with dogs, so parasitic twins are even more rare. This just makes Narwhal all that more special.

Adopting For the Right Reasons

Since the news has spread about the adorable brown puppy with a tail sprouting from the top of his head, people have been lining up around the corner to adopt Narwhal. We hope that every person in that line has decent intentions, but there's no way of knowing that. We're all aware of how often internet clout can be misconstrued.

There are easily 17,000 people who have expressed interest in adopting Narwhal. Steffen doesn't believe he's ready for that just yet. For the time being, he's staying with Steffen for at least another 2 months until she's sure the tail doesn't actually cause any problems.

Not Ready Just Yet

Despite the overwhelming interest in adopting Narwhal, he hasn't been set up for adoption just yet. The workers at Mac's Mission want to make sure this little guy is ready, which is why they're considering waiting until Narwhal isn't such a little guy anymore. To ensure he won't require too much medical attention like procedures or vaccinations, they plan on keeping an eye on him.

Mac's Mission already owns 3 acres of land. But what they really need is a facility to house all of their rescue fur-babies. According to their website, they intend on building a facility on their land to accommodate kennels and possibly an ICU.

With the surge of attention Narwhal has gotten for Mac's Mission, they might be able to accomplish their dream after all. For a small, rural area in Missouri, abandoned animals miss necessary treatment pretty often. Nobody has the needed type of therapy for dogs in that region.

The Work of Miracle Workers

The new attention could accomplishing the mission's dreams of providing care for abandoned dogs at a monumental scale in a rough region. They're always accepting volunteers and donations, much of which can be done from their website. They are also hosting a Christmas event to raise funds for the organization itself.

Until Steffen makes the decision that Narwhal's second tail won't cause him any harm in the future, he'll remain in the care of Mac's Mission. Being a puppy is his only concern. He has no idea that the funny little tail on his head makes him one of a kind.

Finding a Home for Narwhal

This magical unicorn puppy is doing wonderful things for the organization that found him. And whoever gets to adopt him in the future will be one of the luckiest families. He's one of many rescue puppies who deserve a loving forever home.