A City Built on Sand: How Dubai Went From Desert to Concrete Jungle

Sophie Dunne
A City Built on Sand: How Dubai Went From Desert to Concrete Jungle October 25, 2019Leave a comment 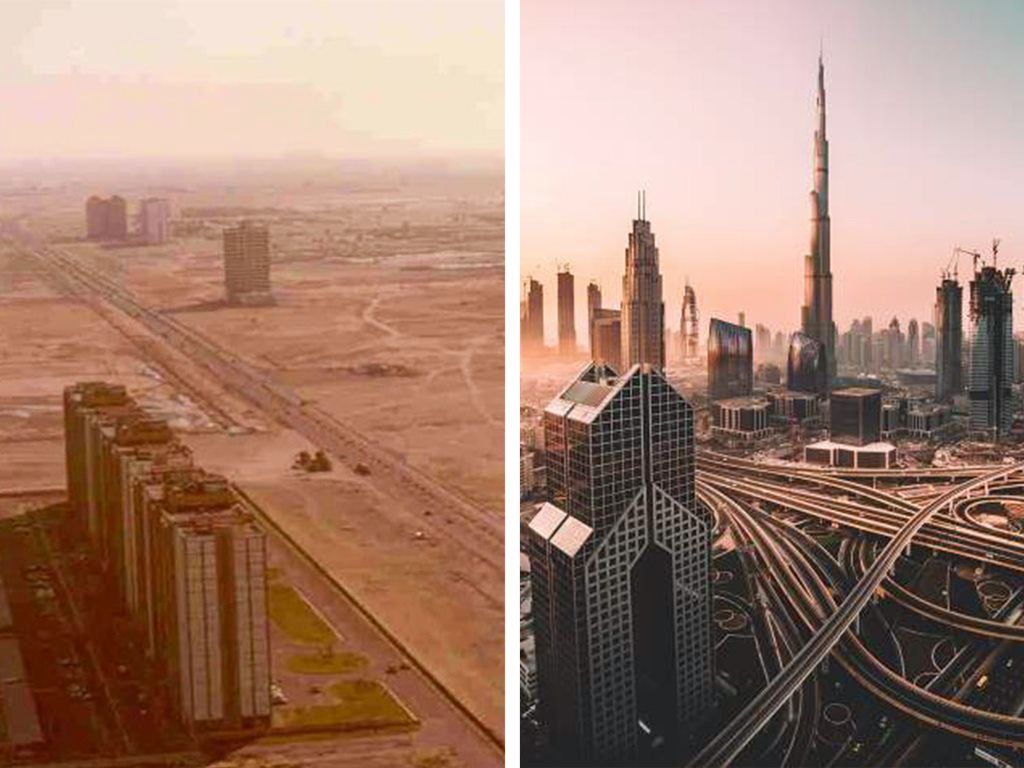 In the scope of 50 years, Dubai has developed from a sand pit into a bustling city of wealth and extravagance. When the small fishing village struck oil in 1966, the desert soon began trading its sand for cement, putting Dubai on the map with the world’s tallest buildings, busiest airports and mind blowing modern technology.

Fishing, pearl diving and a trading port for gold and spices. This was Dubai before its extreme wealth today. Think of Aladdin running through his local bustling marketplace and that's pretty much the picture of Dubai in times gone by. These markets are known as souks and are still a thriving feature of Dubai today with many tourists visiting the old town to get a taste of the city's history.

For thousands of years, Dubai’s trade relationship with neighboring countries provided a steady income for the village. Situated on the Arabian Gulf, Dubai functioned as a port for trading and relied heavily on its fishing and pearl diving. However, when Japan invented artificial pearls in the 1950s, the economy took a harsh downturn. Luck was on their side though and in 1966 everything was about to change for the local fishing village...

After they struck oil in 1966, Dubai’s economic wealth exploded and the little fishing village grew into a bustling metropolis and a growing commercial hub. This new found wealth inspired Dubai to embark on ambitious building projects that would set the bar for architecture and landscape design across the world.

1971 was a turning point for Dubai when it joined its six neighboring cities to form the United Arab Emirates. This fusion of the seven Emirate states thrived with the country’s oil revenue increasing and soon the rulers of UAE would work together on a huge construction program building schools, roads and hospitals.

A growing airline since 1985, Emirates is one of Dubai’s most profitable sources of income and over the years has advertised Dubai as a glamorous tourist destination. Geographically it works out that Dubai is a hub for connecting flights around the world. Emirates fly to a whopping 85 countries which makes it the breadwinner for Dubai's tourism trade.

Nicknamed the ‘seven-star’ hotel because it's just so extra, the Burj Al Arab is so posh that it doesn't have hotel rooms but instead swanky suites. This sail-shaped hotel doesn't actually have a seven star rating but its extreme luxury gives it the status of being above the standard rating scale.

Just when you think Dubai is out of ideas, the city becomes home to a remarkable indoor skiing slope. Located in one of the largest malls in the world, Ski Dubai has 22,500 square meters of indoor snow and an impressive indoor ski slope. In the heart of the sizzling desert, you can walk to the mall in your shorts and then change into your turtle neck and ski for the day oblivious to the sweltering heat outside.

As the Middle-East’s entrepôt, it’s no wonder that the city has developed ambitious landscapes that show off its creativity and wealth to the rest of the world. This man-made island known as the Palm Jumeirah is a perfect example of showing the world how much wealth Dubai has and how far they are willing to go to make the impossible a reality.

With all that desert land covered in skyscrapers and shopping malls, Dubai reused its sand to build more land. In order to build the Palm Jumeirah, millions of tons of rock and sand were meticulously poured onto the sea over a period of six years to build more land. Fun fact: the sand used for this manufactured island could form a two meter wide wall that would circle the globe three times.

Tourist attractions are plentiful in the Arabian city with something for everyone. As well as attracting holiday-makers with a wide range of interests, even Dubai residents never have an excuse to be bored on the weekends. Activities like water parks (including the biggest water park in the world, built in 2008), theme parks, a global village vicinity, the world's longest urban zip-line and desert safaris are just snippets into what Dubai has to offer.

Not too long ago in Dubai, you had to ride on the back of a camel through the sand in order to get from a to b. However, in a matter of decades modern transportation has soared with eight lane high ways and driverless metro trains. Yes, you read right! All metros in Dubai are controlled by computers in a control room with not a single driver onboard the train.

2010: Tallest Building in the World

Standing as the tallest building in the world at an impressive 828 meters, the Burj Khalifa is symbol of ambition, economic growth, creativity and it's just another way for the city to boast.

As well as building the tallest buildings and man-made islands, Dubai wanted more attractions that would generally be considered impossible in a desert... like an abundance of nature. Dubai created the world's largest flower garden, home to roughly 100 million flowers imported from around the world. Everything that could be covered with flowers has been including an Emirates Airbus 380!

Yet another tourist attraction that brings nature to the desert is Dubai’s butterfly garden. This domed enclosure is home to a tremendous 15,000 butterflies and is another illustration of how the city goes above and beyond in the name of tourism.

A game changer in emerging technology, Dubai's fire fighting services are unlike our boring red fire trucks. The city employs a number of fire fighting jetpacks worth $35K a piece. Each water-powered jetpack allows fire fighters to get a better vantage point when distinguishing flames. Smart, huh?!

From 43,000 in the 1960s to three million today, the population in Dubai has soared in recent years with the amount of expats settling down in the cosmopolitan desert. Many alluring features like sunshine all year round, relaxing leisure and lifestyle, and reliable health care and education attracted a global community to emigrate there. However, one of the most attractive qualities about working in Dubai: a tax free salary.

The UAE is a tax free country, therefore all of its residents earn an attractive 100% tax free salary. This desirable lifestyle has attracted more foreign workers over the decades which created demand for more housing, schools and hospitals. With this population growth the city expanded and today is home to more than 85% of expats.

Dubai is a city built to make your jaw drop. Its attractive features such as its scorching weather, architectural attractions, international cuisine as well as authentic Arabic traditions, make it an intriguing  holiday destination. Known for its luxurious tourism, Dubai goes above and beyond to show off their creativity, diversity and extreme wealth to the rest of the world.

Global business in Dubai are as active as the lively tourism. A well as international trade, businesses in general are booming in this relatively new city. As a result of its large expat population, job opportunities in Dubai are high with business opportunities in construction, oil and gas, finance, real estate and cuisine. All of these global influences are what help fuel the city’s economic growth.

Tourist don’t just visit for the the five star restaurants and camel riding, but also the shopping! Dubai is home to the biggest mall in the world with both designer stores and high street brands, which is yet another example of Dubai’s prosperity and tactical way of attracting tourists.

Another opportunity to portray itself as not only a city but a brand is the Expo 2020 event in which Dubai will be the host city. This event invites global businesses to showcase modern technology, inventions and cuisine and will welcome an estimated 25 million visitors for the six month event, giving Dubai another global platform to stand on.

In preparation for Expo 2020, Dubai have started building another skyscraper a notch taller than its own Burj Khalifa which stands at 2,700 feet. The one billion dollar project that will be known as The Tower will house hotels, shops, restaurants and a series of dramatic glass balconies that will rotate outside the walls of the tower. Not for the faint-hearted.

In 2016, the ruler of Dubai announced plans for a quarter of all journeys in Dubai to be driverless by 2030. With Dubai being the world's biggest laboratory for technology, research and development, this idea doesn't come as a surprise. As well as these "autonomous pods", Dubai is working on driverless air taxis and drone deliveries that will separate them from other cities around the world.

Keeping up their status of being the first of many endeavors, Dubai is currently working on a project that will make flying cars a reality. The Autonomous Air Taxis are a drone taxi with 18 rotating wings that will transport its passenger through the air with no pilot. It recently took to the skies on a test flight and since its success, Dubai claims to be the first "self-flying taxi service."

Taking advantage of its high temperatures and vast desert land, Dubai is currently building the world's largest single-site solar park which aims to cover a massive 83 square miles. It's critical for the Dubai Clean Energy Strategy 2050, which aims to increase clean energy in the city to a substantial 75 percent by 2050. Another impressive example of how Dubai transformed from a quaint fishing village to a global phenomenon.