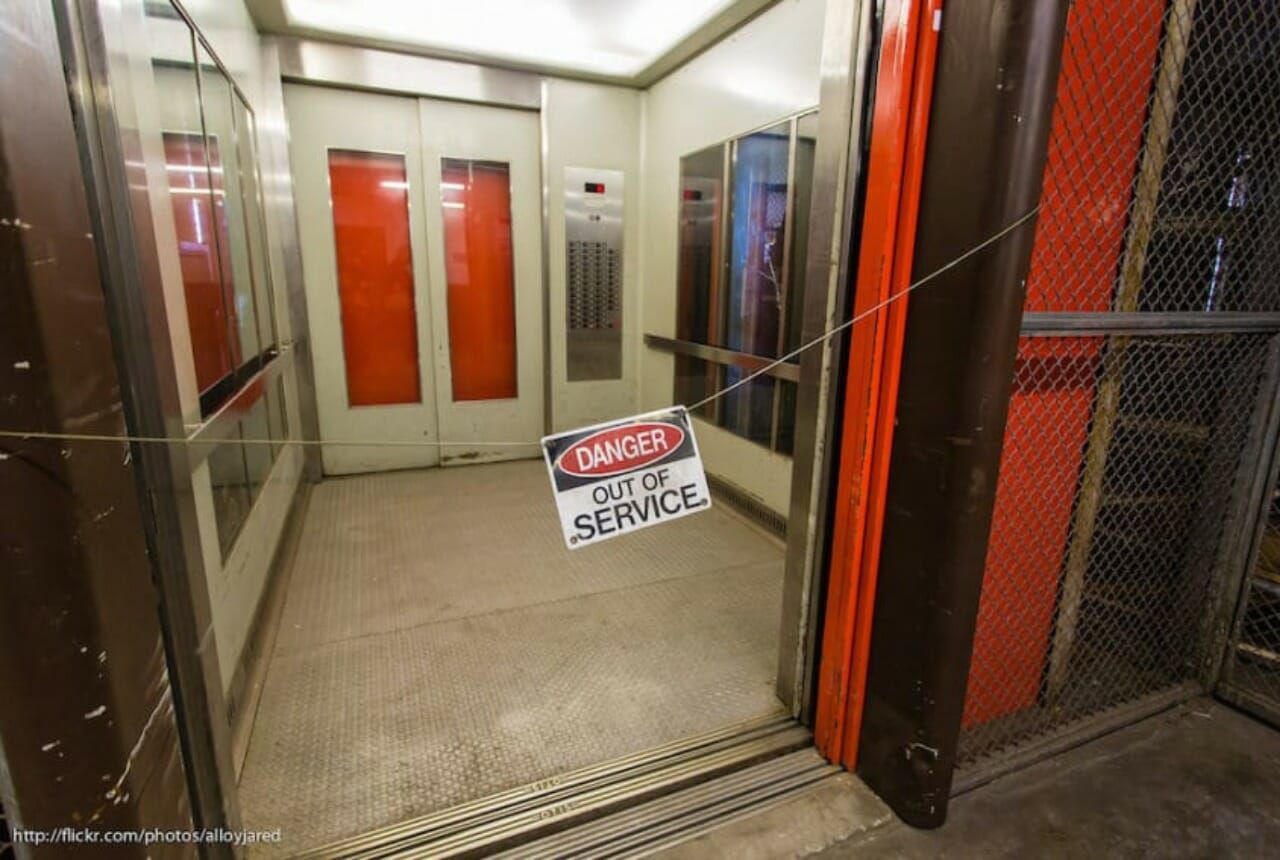 Let's be honest: We're all guilty of ignoring our doctors' advice to take the stairs way more often than we do. Because no one expects taking the elevator to be the last decision they ever make. But sometimes that's exactly what it turns out to be. And we're talking fireballs, fatal injuries, crushed bones and claustrophobic nightmares. These brave souls learned the hard way that ditching the stairs is not always the easy option. So check out this terrifying collection of elevator death  and dismemberment stories. It'll make your stomach drop faster than a quick descent from the top of a high-rise building.

Back in 2008, 26 high school cheerleaders attending a cheerleading camp at the University of Texas decided to see if they could all cram into an elevator at Jester Residence Hall. Far exceeding the elevator's 15-person capacity, the elevator stalled en route from the fourth to the first floor and emergency responders were forced to assess the scene. After nearly a half hour of work, the girls were safely rescued from the cramped elevator carriage.

A delivery man in Bangalore, India had just finished his route at the Devara Jeevana Hall before pressing the call button for an elevator to take him to the first floor. When the doors opened, he stepped inside, realizing a moment too late that there was no elevator carriage to greet him. After falling one story to the bottom of the shaft, he was soon crushed by a faulty elevator car that landed directly on top of him.

Unfortunately for a 24-year-old Chinese nurse trapped in a stalled elevator located in Shenzhen's Luohu District, escape wasn't an option. Just as she was attempting an exit from the elevator's open doors, the car started to rapidly descend, trapping her head between the wall and the doorway. The young medical professional's body was sliced in half a result of the fall.

When Aber Al-Rabahi pushed a stroller holding her six-week-old daughter Areej Ali into the elevator of a Coney Island apartment building, there was no car to hold their weight. Instead, Al-Rabhai unknowingly stepped into an open elevator shaft, falling five feet before landing on top of both the car's roof and her daughter. Unfortunately, the newborn did not survive the fall.

In an extremely rare malfunction, an elevator located in a commercial building in Hong Kong quickly plummeted after all four suspension cables snapped at the exact same time. Along with the cable failure, the elevator's emergency brake failed to kick in and the seven passengers located within the car suffered a nasty fall. Thankfully, the elevator only just cleared the first floor when the malfunction occurred and none of the injuries sustained prove to be fatal.

On January 30 2016, an elevator got stuck  between the tenth and eleventh floors in a housing development located in the Gaoling district of Xi'an, China. After a maintenance crew was called to investigate, they failed to open the elevator doors to actually check for any trapped bodies and thus failed to notice a woman trapped inside the car. Her body was discovered over a month after the incident took place.

Instead of the Caribbian vacation of their dreams aboard the Carnival Ecstacy cruise ship, Matt Davis and his wife were assaulted with an image they won't soon forget. While working on one of the ship's many elevators, a crew member suffered a terrible accident and bled to death--with the aftermath visible to a number of stunned onlookers. "To look and see the elevator with just blood coming down like a sheet and not stopping...it was a real life scene of The Shining," said Davis.

20-year-old tattoo artist Tito Morales died after turning to an elevator shaft for his next adrenaline fix. After Morales tried to "elevator surf" and jump from the top of one car to another, he became stuck between the wall of the car and the elevator shaft itself. While Morales was eventually freed from his cramped position, he was pronounced dead at the scene.

On June 3, 2006 16-year-old student Hirosuke Ichikawa attempted to back out of an elevator while on his bicycle at a housing development in Tokyo's Minato Ward. Unfortunately, the elevator suddenly began to travel upward before Ichikawa cleared the doors, and he soon became trapped between the ceiling and the doorframe. As a result of this highly-publicized tragedy, elevator safety in Japan was called into question by the Tokyo High Court.

There's no denying that Stephen Hewett-Brown died a hero. The 25-year-old saved a woman from stepping into a falling elevator located in a NYC Lower East Side apartment complex on New Year's Eve 2015. Brown, who was already in the car as it started plummeting, pushed 43-year-old Erude Sanchez onto safe ground before he was crushed between the elevator and the building door.

Nicholas White bit off more than he could chew when stepping out for a smoke break from his New York City high-rise office building. Riding the elevator back up to his floor following a short break, White became trapped for nearly two days when the elevator stalled between the thirteenth and fourteenth floors. According to building management, White's terrifying ordeal was "an unfortunate combination of mechanical failure and human error."

Nightmare For A New Mom

Just as she was enjoying the afterglow of becoming a first-time mother, Rocio Cortes Nunez's life was cut short by a freak elevator accident. After giving birth via Caesarean section at Seville's Our Lady of Valme hospital, Nunez was moved by hospital staff to a different floor for post-op recovery. As she was being wheeled out of the elevator, the car shot up and trapped the new mom against the ceiling, crushing her to death.

Trapped In A Heat Box

For two Roman Catholic nuns visiting the Vatican during the hot Italian summer, their holy journey proved to be anything but #Blessed. While riding in an elevator in a building near the Holy See, the two nus soon became trapped when the structure suffered a power failure. To survive the four days that they were confined to the elevator car, the two religious figures drank their own urine to avoid losing consciousness.

New York's famed advertising row was the site of tragedy after an elevator malfunction led to the untimely death of 41-year-old executive Suzanne Hart. Just as Hart was stepping into an elevator at her company's Madison Avenue headquarters, the car shot upward, crushing her in-between the floor and the top of the doorway. Two individuals inside the elevator car at the time of the disaster sat helpless as Hart's body was mangled, unable to do anything to prevent the split-second catastrophe.

On September 11, 2001 the elevator system within the World Trade Center proved to be deadly for the individuals trapped within the massive, 198-car system. When the hijacked planes struck the building complex, innocent inhabitants were either burned alive, trapped inside the elevators until the towers collapsed or forced to plunge to their death after the track cables were destroyed. To date, it is estimated that 200 people lost their lives in elevators during the attack.

Unbelievably, an 85-year-old nun was trapped in an elevator for nearly four days and lived to tell the tale. The elderly woman was left alone in the convent while her sisters in faith were out of town for a convention. With no one to hear her cries for help, Sister Marget Geary turned to prayer and pleaded with God to see her through. "For four nights and three days, I lived in this elevator," she said. "It was either panic or pray."

In April 2011, 28 people clamored into a New York City MTA elevator at the 181 street subway stop. Unfortunately for these commuters, the elevator jammed and they were forced to contend with rising temperatures and sharing extremely close quarters for an hour and a half until maintenance workers arrived. Eventually, each passenger was rescued individually by an opening in the cab's roof.

Ming Kuang Chen, a veteran delivery man for a Bronx Chinese restaurant known as Happy Dragon suffered a terrifying three-day ordeal after fulfilling his last food run of the night. Descending from an upper level, Chen became trapped in-between the third and fourth floors of the 38-story New York apartment complex after the elevator's selector tape broke. Unfortunately, Chen remained trapped in a 4-foot by 6-and-a-half foot express elevator cab for over three days with no food and water before being rescued.

Back in 2003, surgery resident Hitoshi Christopher Nikaidoh was decapitated by elevator number 14 on the second floor of the Christus St. Joseph Hospital in Dallas, Texas. As Nikaidoh was stepping onto the elevator, the doors closed and failed to spring open after coming into contact with his shoulders, pinning him in place. Despite Nikaidoh struggling to free himself, the elevator continued to travel upward and the ceiling sliced off most of his head.

Dressed like an amateaur exterminator and outfitted with a tank of fuel and a lighter, Brooklyn resident Jerome Issac set 73-year-old Deloris Gillespie aflame while she was standing in the elevator of her apartment complex. After Issac was certain Gillespie was fully engulfed by the flames, he fled down a nearby staircase before turning himself in to law enforcement the next morning. According to Issac, Gillespie was behind in payment for a number of odd jobs he had completed for her, and the immolation was a result of her refusal to cough up the cash.