Camila Villafane
These Photos of Freezing Conditions Show Why You Don’t Mess With Cold Weather January 31, 2019 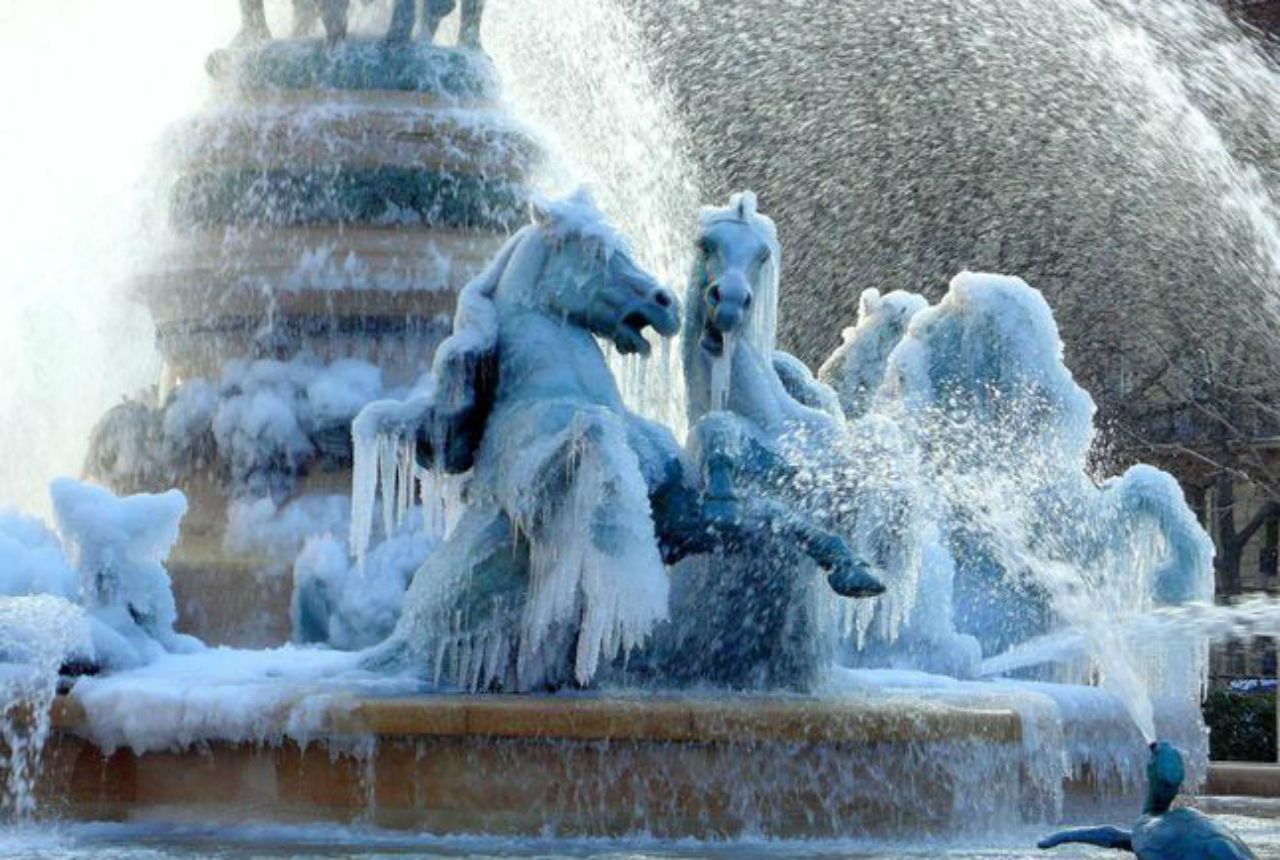 Braving the cold is one thing when there's temperatures like 60 degrees. But when the temperatures feel like they're near freezing? Well, that's when stuff gets serious.  Sure, white snow, and frozen lakes sound pretty. But it's a different story when you have to deal with freezing cold temperatures. So here are some photos that prove that cold weather is a total badass.

This photo taken by an Imgur user proves that Buffalo Bills fans are oh-so dedicated to the sport that they're willing to freeze their butts off just to root for their team. But if you can handle losing 4 Superbowls in a row, you can handle the cold.

At first, this photo looks horrifying like someone showered a herd of horses with water and froze them solid. But in reality those are just stone statues in a fountain dripping with icicles. And now that you know no animals were harmed in the making of this pic, ain't it awesome?

Reddit's Aspire2dance took a shot of this hydrant, which had enough water to freeze and expand, causing the cap to fall off. Eventually, the water started trickling down and as it did, it froze. It's making us shiver just by looking at it. Sure hope firefighters don't need it.

Reddit's DefNotJRossiter tried to make the best out of the chilly Canadian weather and took this photo of Ramen, which had frozen over fairly quickly. Now it looks more like a ghost hand is trying to eat Ramen. The Redditor claimed it froze almost instantly in -40C weather. Now that's scary!

You can use this tourist walkway in the summer at Niagara Falls in order to get a better look at the waterfalls. But in the winter, it will literally feel like hell has frozen over. The only thing you'll be thinking about is your knees shaking and your teeth chattering.

Josh Morrie and Morgan Daye from Tennessee thought it'd be a great idea to shoot their engagement photos in Bald River Falls in the winter, where the temperatures hit 25 F. While the shoot looked really chilly and dangerous, the photos came out quite memorable.

Not even cold temperatures were able to take Daniel Schetter, also known as Surfer Dan, away from the arctic freezing waters that hit the Midwest and Great Lakes. But look at how his beard has frozen over. He was surfing for 4 hours and ended up with it.

Reddit's MirKvant found that it's so cold where he lives that the steam that came out of the sewer grate turned into snow. According to one of the people who commented, there could be toxic compounds the evaporated with the water, in case anyone considered licking it.

On average, the coldest the temperature drops in New York is 35 F, which is what Instagram's Rainy_tc discovered when he took this photo of Central Park on December 31st, 2017. The park, which is bustling with green leaves in the summer now looks like a virtual ice city.

Niagara Falls In The Winter

Over six million cubic feet of water goes over the falls every minute during the winter in Niagara Falls. But the bridge and the rock face are practically frozen over in this photo taken by Igor Illyutkin from Toronto, Ontario. But that's totally normal in the Canadian/American border.

Photographer Kristina Makeeva from Moscow walked across the 600km stretch of Lake Baikal located in the mountainous Russian zone of Siberia. If you're wondering how these interesting patterns are formed, it's because the water freezes layer by layer.

When The Cold Freezes The Light

Cold weather can even go as far as to freeze  this lamppost solid, and even the holiday decorations that surround it are now completely covered in ice. But it's not surprising given that the average temperatures in January reach 25 degrees Fahrenheit.

Majesticbunny's Ellen Drew Prather shared this photo of Lake Michigan, where amazing ice sculptures form as the temperatures drop. Just take a look at these branches, covered in some serious icicles. On December 25th, 2017, wind chills almost went down to 40 below zero in Lake Michigan.

In this photo taken in 2014, we see just how high the snow can get. The snowfall was practically up to the knees of the Charles Hackley statue in front of the Culinary Institute of Michigan when a winter storm hit the Muskegon area. Fortunately, he didn't mind.

Its Nose Is Frozen

This photo was taken in the Great Lakes on January 11th, 2018 as a U.S. Coast Guard cutter breaks the through the ice. And boy, does that ship's nose look chilly. In fact, the recent deep freeze in the area has left scientists shocked by the arctic blast.

Of course, you won't find corals in Niagara Falls. But tell us that all that ice that's formed on the side of the bridge doesn't look like a coral reef! We certainly don't envy the folks that are standing on that bridge, which looks like a castle fort.

The dope thing about statues of people sitting on benches is that when it snows they don't hide indoors like us mere mortals made of flesh and blood. Instead they look like bosses who don't care if they get hypothermia, man, they'll die with their boots on. Brings new meaning to the expression "stone cold."

The National Weather Service predicted that 2 inches of snow and sleet would fall in Savannah, GA on January 2, 2018, and boy were they right. Just look at how the tritons on this statue are full of icicles! The sight is impressive, but we sure feel bad for the statue.

In Minnehaha Park in Minneapolis, Minnesota, you'll find the 54-foot Minnehaha Falls with limestone bluffs and the river below. Of course, you won't be able to see much of that given that the Falls are frozen solid and looking more like Krypton in "Superman," 1978.

Here's a fun fact. Did you know that road paint is made of a mixture of plastic and glass? It makes it more reflective and visible. But as Reddit's WhibblyCheese learned, it also leads to the paint shattering when the weather drops to freezing down temperatures.

The Woman Who Came From The Cold

This woman might appear to have walked out of a meat locker, but she actually just walked into the Preobrazhensky Cathedral, and the fog produced by the frigid weather has followed her in. Locals in Oymyakon often take refuge in places like churches to stay warm.

The Road of Bones is the only way in and out of Oymyakon, but those who drive across are essentially driving over the bones of the tens of thousands of slaves who built it, but perished from the cold, and possibly poor nutrition. But keep on driving. Don't mind them.

Good luck trying to refuel in the winter in Mississippi! You'll be lucky to get the nozzle loose without suffering from frostbite, as Instagram's f8d2blu discovered. They say the average temperature in Mississippi is 48 F in the winter. This picture makes us beg to differ.

You can't help but wonder if New York decided to build one giant crushed ice making machine, or if someone actually forgot to turn off the fountains when the temperatures dipped. Apparently, they didn't. Then again, the pipes would freeze if they had.

This Lighthouse in Saint Joseph, Michigan was taken on January 23, 2013 by photographer John McCormick. Clearly, when the temperature dip below 6 degrees Fahrenheit, it can be pretty difficult to be a beacon of light that guides seafaring travelers to safety.

Reddit's jkc83 posted this photo of their pool frozen over because of freezing cold temperatures. But tell us that it doesn't look like these dogs are walking on water. It's a good thing dogs have tough paws to withstand the chilly ice block that was once the swimming pool.

You see some pretty dark things in Bindingsvann, like this frog who was trying to swim across the lake. Photographer Svein Nordrum took the picture, and claims that it was trying to find a mate when the freezing temperatures froze him in mid crossing.

In March 2019, at the tail end of winter, the frozen waters of Lake Michigan faced a sudden thaw with the onset of spring. The result was sheets of ice in the lake breaking apart into countless ice shards and rising to the surface, giving us this beautiful but discomfiting image.