Friends Bought An Uncomfortable Secondhand Couch, Rip it Open and Find Something Crazy Inside

Sophie Dunne
Friends Bought An Uncomfortable Secondhand Couch, Rip it Open and Find Something Crazy Inside March 2, 2020Leave a comment 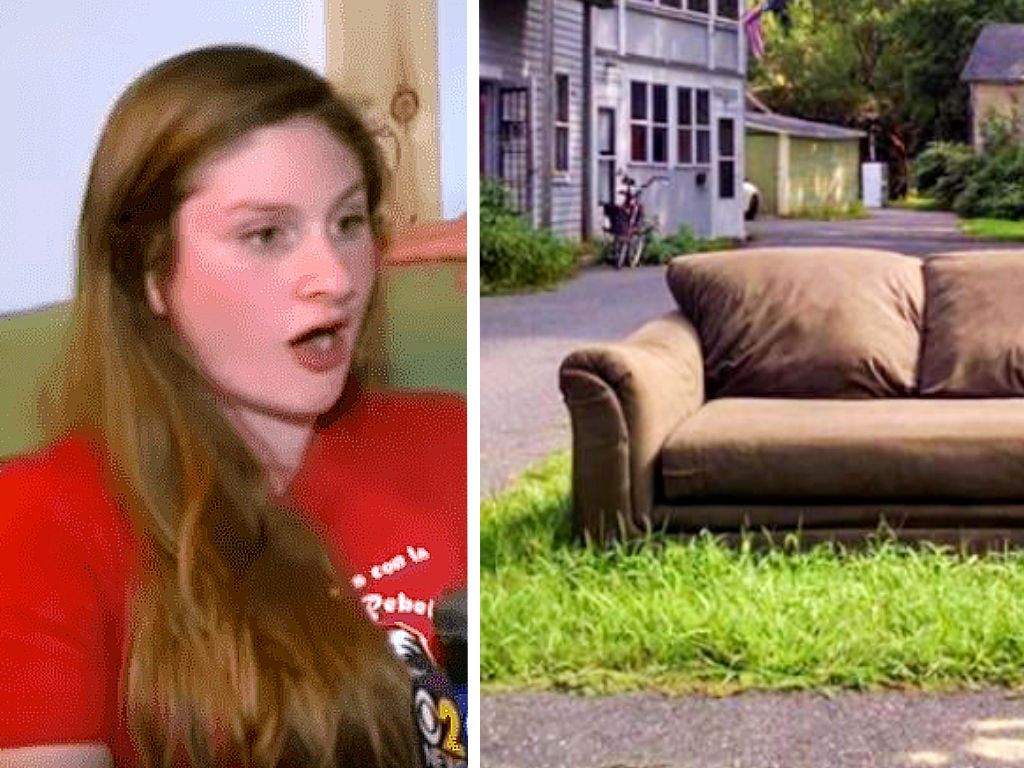 Three roommates bought a cheap, smelly, old secondhand couch for their student dorm room, but they had no idea that their new purchase was about to make headlines. When they got home with the outdated couch, the pals noticed there was something hiding beneath the cushions. When they pulled the couch apart, they could not believe what they saw in front of them.

They Bought a Used Couch

Students at the State University of New York, Reese Werkhoven, Lara Russo and their friend, Cally Guasti took a trip to the Salvation Army in search of a couch for their accommodation. However, they were shocked to discover that the couch was hiding the surprise of a lifetime.

A Couch Full of Secrets

With their strict student budget, the roommates weren't too fussy with what couch they picked, just as long as the dimensions fit their living room. They didn't just pick any ordinary couch, though. Unknown to them, they picked one with a very interesting past.

They Chose the Couch for Its Size

Browsing through the thrift shop, the students stumbled upon an "ugly, smelly couch." It wasn't the most attractive pick, but it was the only one that the students could afford whose size would fit in their apartment.

They Got a Bargain

The friends bought the aged piece of furniture for an impressive $20, but had no idea of the real bargain they were getting from buying the dusty, old thing. They hauled the tired couch home, unaware of what else they were carrying back with them to their quaint student home.

The Couch Was Uncomfortable

When the roommates finally settled the couch down in their living room and began using it, they noticed that although it was a beaten up, old couch, it was a lot more uncomfortable than they expected.

The Couch Had Annoying Bulges

Taking into account that the couch was worn out and not surprisingly uncomfortable, the students let it slide and settled in with their cheap and cheerful new bargain. The day came however, when one of the roommates had enough of the lumpy bits along the couch.

They Felt Plastic Bags Inside the Couch

Reese Werkhoven was relaxing at home on his exhausted, old couch when he became pestered by the bulges along the armrest. He felt something like plastic bags underneath the embroidery and assumed the couch was padded with them because it came from a second hand store.

They Wanted to Cut it Open

Werkhoven decided to inspect the lumpy cushions under the fabric and was prepared to cut the couch open with a knife to have a look inside. To his delight, when he lifted up the arm rest he noticed there was a zipper.

When he pulled back the zipper, Werkhoven’s curiosity heightened as he realized this couch was more interesting than he thought. Inside the armrest he found a plastic envelope. He looked over at his roommates and began to open the mysterious plastic pouch.

They Discovered the Couch Was Hiding Money

When Werkhoven opened the envelope, the lucky student had discovered a stash of $4,000 in the armrest of his couch. "I almost peed! The most money I'd ever found in a couch was like 50 cents. Honestly, I'd be ecstatic to find just $5 in a couch," Werkhoven said in an interview.

The Roommates Began to Investigate

Digging their arms into every slit and crevice, the three pals were hitting jackpot after jackpot. In a room filled with banknotes, the students were busy counting when one of them discovered more money in another corner of the couch.

They Kept Finding More and More

One of the occupants of the apartment, Cally Guasti, explained in an interview how she was on the phone to her mother when they had already counted $20,000, but as she stayed on the phone the money count grew higher and higher.

Like a scene out of movie, the students found two more cash-filled envelopes and soon found themselves on the floor, rolling around in money. They eventually ended their search with $40,000 of cash in their hands.

What Would They Do With All This Money?

In an interview, Lara Russo explained how she was skeptical about the money, "I was a little overwhelmed. I wanted to put it back in the couch and then re-find it in the morning, when I could process it better." But what would the broke college students do with their riches? Would they splurge it on beer and food or track down the owner?

They Knew It Wasn't Their Money

The giddy trio were baffled by their find and wondered what to do about discovering this much money. They knew it didn't belong to them, but how would they even begin to find the owner? It wouldn't be long however, before the name of the owner surfaced from the crevices in the couch.

They Were Afraid it Could Have Been Dirty Money

Not too long after they reached a total count of 40 grand, the students discovered another envelope with a bank statement inside and a woman's name printed on it. It was clear to them who the money belonged to, but the students were still cautious that the cash might have been involved in criminal activities.

They Knew What They Had to Do

"We all agreed that we had to bring the money back to whoever it belonged to . . . We didn't earn it," Russo said. After debating the pros that it should be returned to its owner, and the cons that it could be dirty money, the roommates came to a decision.

They Phoned the Owner

The friends went in search of a phone number for the woman and when they dug one up, they gave her a call. When she answered she was adamant that the money was hers. "Oh, I left a lot of money in that couch!" she announced. So, the roommates hopped in their car and made a trip to the woman's house.

They Travelled to the Owner's House

Wary that the couch's owner could be a criminal, the students drove 20 miles to Hudson Valley to return the $40,000 to its rightful owner and to ask her why she used her couch as a bank.

The Owner of the Couch Was a Widow

When they pulled up to the address, the three friends were greeted by a very excited widow. The woman, who preferred not to be mentioned, invited the three inside her home to explain why she had tens of thousands of dollars hidden away beneath the cushions of her dusty, old couch.

Her Husband Had Stashed the Money

Each week for years, the woman's husband, who suffered from heart problems, stashed money in their couch for his wife to use after his death. He accumulated quite an impressive amount over the years but one day, his hard earned savings were gone in a flash, leaving his widow distraught.

Her Daughter Sold the Couch

After her husband’s death, the owner of the couch was recovering in a rehabilitation facility following serious heart surgery. During her stay at the rehab center, the woman's daughter sold the couch to make way for a recovery bed. When she got home, she was devastated to find that her and her husband's secret savings were now lost and presumably gone forever.

The Woman Gave the Students a Reward

The woman was dumfounded by her luck that the couch ended up in the possession of three ethical students. In an interview, Lara Russo explained that the couch almost didn't end up in their apartment. "We almost didn't pick that couch. It's pretty ugly and smells, but it was the only couch that fit our living room." The woman, who is a former florist, rewarded the students with $1,000 to show her appreciation.

A Lesson to Take Away From This Story

The moral of the story is pretty clear from the ethical decision made by these three roommates. However, it may also be: don't give away your parents old things without first consulting with them! Now that the students are a thousand dollars richer, perhaps they can finally afford a brand new, nice-smelling couch!