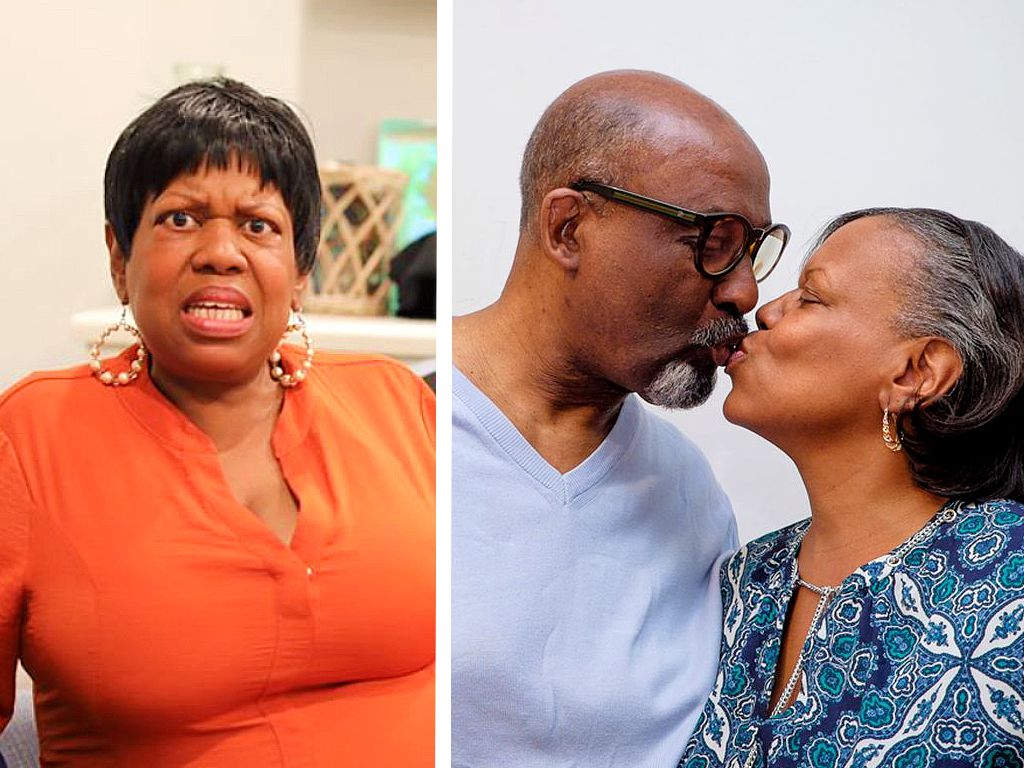 Cheryl Love was making tea in the kitchen when cops came knocking on her door. But they weren’t looking for her. They rushed through her home and head straight to her bedroom. She was powerless to stop them. When they got there, they confronted her husband, Bobby Love, and forced him to reveal a secret he'd been keeping for 40 years...

Her Day Started Out Normal

The year was 2015, and it was just another day for Cheryl Love from Brooklyn, New York. She was busy making tea in her kitchen while her husband Bobby slept in their bedroom. But soon, her dream life turned into a total nightmare when she heard a knock on the door.

She Thought She Knew Her Husband

Ms. Love remembers the day she found out she'd been living a lie. When she went to open the door, the police were standing outside. She told Humans of New York, "I opened it up slowly, and saw the police standing there. At first I wasn’t worried. We had this crazy lady that lived next door, and the police were always checking up on her. So I assumed they had the wrong address." But she was the one who had everything wrong, and it had been this way for a very long time.

He Was a Troublemaker Growing Up

Her husband, Bobby Love, had grown up in North Carolina. He was one of eight kids, and his mother couldn’t control him. So, he got into a lot of trouble. “I lifted purses from unlocked cars. I was stealing government checks out of mailboxes,” he told Humans of New York. But he didn’t stop there.

He Paid For His Dues

“I got bolder and bolder, until one day I got busted stealing from the band room at school,” he said. In the blink of an eye, he was shipped off to Morrison Training School, a juvenile detention center, and he hated every minute of it.

“The food was terrible. The kids were violent. I still have scars from all the times I got beat up,” he shared. And whenever he heard the whistle of a freight train pass by, he wondered where the train was going. Until one night, he decided to follow it and see for himself.

He Made a Run For It

“So one night, when the guard turned his back to check the clock, I ran out the back door-- toward the sound of that whistle. And that was the first place I ever escaped from,” he recounted, almost savoring the moment he decided to escape Juvie hall. But this wouldn’t be his last great escape...

He Got a Fresh Start in Washington D.C.

“I followed those train tracks all the way to Washington D.C. And for a minute, it seemed like everything would be alright,” he said. His brother was there, so he stayed at his place and started going to high school again. It seemed like he had finally turned his life around, but old habits die hard.

He Couldn’t Escape the Sins of His Past

It didn't take long for Bobby to start hanging out with the wrong crowd again, and it cost him dearly in the end. By the time he met his wife, Bobby had taken on a series of odd jobs, working for minimum wage, until one day when he really got lucky. In 1980, he started working in the cafeteria of the Baptist Medical Center in Brooklyn where he met Cheryl. By then, Bobby was a brand new man. Unfortunately, cops didn’t see it that way.

They Barged Into Her Home

The moment she opened her door, twelve officers barged in. Some of them were wearing FBI jackets. They headed to her bedroom determined to find her husband. Then, she heard them ask him: “What’s your name?” And he innocently replied “Bobby Love.” But the cops didn’t believe him. So they asked again.

They Forced Him to Reveal His True Identity

“No. What’s your real name?” the cops asked. And then she heard the love of her life mumble a few words. The cops smirked and told him, “You’ve had a long run.” She had no idea what they were talking about, and then it all became clear.

She Didn't Know What Was Going On

“Bobby, what’s going on?” she screamed. “Did you kill somebody?” she recounted asking him. Her mind was racing a mile a million. But her husband's response was straight up and simple. “This goes way back, Cheryl. Back before I met you. Way back to North Carolina.” It suddenly became very clear to Cheryl that she didn’t know her husband as well as she had thought.

She Tried to Stop Them

Love tried getting in between the officers and her husband, but they kept saying, “Get back, get back. You don’t know who this man is." But it didn’t take her long to discover that the man she had shared a bed with all these years was not who he claimed to be.

He Was More Than a Petty Thief

It turns out that the group of bandits he hung out with after moving to Washington D.C. weren’t just petty thieves. They also robbed banks, but Bobby and his friends managed to get away with it for a while. “We’d drive down to North Carolina because those banks had less security. And we got away with it a few times,” he explained. But in August of 1971, one of the banks they'd robbed had a silent alarm that was used by a manager to alert the police.

He Got Caught Robbing a Bank

The second Bobby made it outside, he and his friends were apprehended by the cops. He tried running away but was shot in the backside. He woke up in the hospital and it was all over for him. But here's the kicker... back in those days, Bobby Love was known as Walter Miller, and he was facing some serious prison time.

He Lost His Freedom But Not His Hope

“It was all over for Walter Miller. The judge sentenced me to twenty five to thirty years,” he explained. He tried to appeal his sentence, but nothing worked. He was sent to Central Prison, a maximum-security facility. Miller's mother hoped he would turn his life around, but unfortunately, she passed away before he had a chance. But he was still committed to changing his life.

He Was the Perfect Inmate

“I never had a mark on my record. My behavior was so good that they transferred me down the hill to a minimum security facility,” he said. He had a lot more freedom there and even had his own radio show. He never intended to escape, but his plans eventually changed.

But He Was Ready to Break Out of Prison

“Because I worked at the radio station, I was allowed a single pair of civilian clothes. I put those on beneath my prison garments and wore everything to bed,” he said. Miller also cleaned out his locker of any phone numbers and addresses so the guards would have no way to trace him. The next morning, he saw a chance to escape and he took it.

He Saw an Opportunity to Run and Took It

“The careless guard was stationed at the gate. The one who never patted down the prisoners. So I said: ‘That’s it, I’m leaving.’ I got on the bus and went to the very back row, right next to the emergency exit,” he shared. As the bus slowed down to stop for a few seconds, Miller opened the back door and just like that, he took off.

He Came Up With a New Identity

The alarms went off as he took off his prison clothes and started running. He eventually got someone at the bus station to buy him a one-way ticket to New York. A girl on the bus asked him what his name was and in that moment, he came up with Bobby Love. Eventually, Bobby met the woman he'd end up marrying and she was the total opposite of him.

He Found the Love of His Life

Cheryl Love was sweet, naive and kind, which are some of the reasons why Bobby was so in love with her. But he never told her the truth about his past. They got married in 1985 and had four beautiful children. His family urged him to tell her the truth, but he knew she was too wholesome to hold such a secret, so he kept it to himself, and wound up working in the last place you would expect.

He Was a Man of Faith

Miller became a deacon at his church. “Every Sunday our pastor would preach about forgetting the past, and forgiving ourselves, and looking ahead,” he said. Those words really resonated with him. He was the true embodiment of what the pastor preached as he had managed to change his entire life. But Miller's wife, as wholesome as she was, already suspected that something was off with her husband.

There Were Warning Signs

“First, he never liked to be in photographs. And he always thought people were watching him,” she explained to Humans of New York. He would also shut down whenever she tried getting close to him. But overall, Miller (or Bobby Love to his wife), was a good husband who did the laundry, cooked and cared for his family. But now Cheryl knew the whole truth. Her husband was behind bars. But the man cops had been looking for all this time didn’t exist anymore.

Everyone Walked on Eggshells Around Her

Her husband’s arrest was all over the news, and people at church refused to believe she didn't know the truth about her husband, but she truly didn’t. Even her co-workers started acting funny around Cheryl and it really upset her. “I was so angry. But I never hated him. I wanted to comfort him. I wanted to hold his hand,” she explained. But was their marriage over?

She Couldn’t Let Him Rot in Prison

When she visited her husband in prison, he told her he assumed she was going to leave him and she told him that she had married him for better or worse. But she needed to get him out of prison, so she wrote letters to President Obama and their governor. She even gathered testimonials from people who could vouch for him. But did it pay off in the end?

He Was Free to Live His Life Again

She spoke to the parole board on her husband’s behalf. “I didn’t know a thing about Walter Miller. But I told them all about Bobby Love. And the parole board took mercy,” she shared. After a year in prison, her husband was released. He legally changed his name to Bobby Love, and now, the couple are moving on stronger than ever.