Funny Lost-And-Found Flyers So Good, You May Hurt Yourself Laughing

Camila Villafane
Funny Lost-And-Found Flyers So Good, You May Hurt Yourself Laughing October 30, 2017 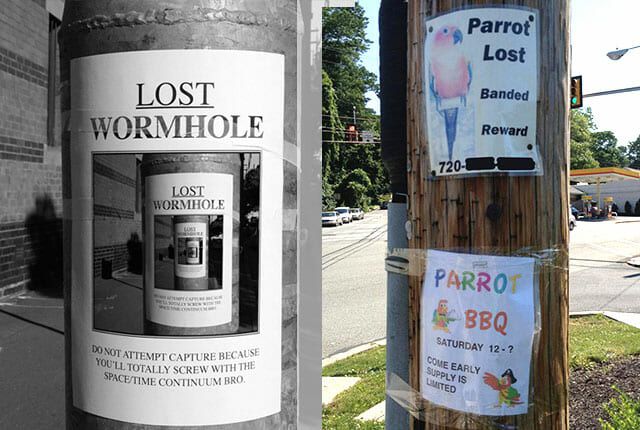 It's tradition that when you lose something like a pet or a bike, you make some "lost" flyers. And then you post them on telephone poles around the entire neighborhood. But sometimes you're not missing anything. Also, it's a really boring day. That's when you can post some funny lost-and-found flyers. You know, just to be a weirdo. Just to give everyone a good laugh. And then you'll be a local hero.

Of all the funny missing posters, this one certainly squashed the competition. We sure hope not one squashed Harry in the process trying to capture him.

Ninja didn't say a darn thing and neither will you, cause if he'd been real, your vocal chords would look like a broken guitar after he was done slicing and dicing your throat.

This cat's pawsome and so is this missing poster. How else are you going to get anyone to notice your kitty when no one's hitting like on your Facebook or Instagram page?

Uh-oh! Looks like someone's pet turtle has embraced his inner power and turned himself into a nunchuck-wielding hero in a half-shell.

The only thing cleverer than funny missing posters, is a poster that's gone totally missing. It's an unsolved mystery worthy of an X-Files, cause real authorities would tell you this case has gone cold.

Have you seen this guy? Then you really haven't been looking. It shouldn't be too hard to find. He really sticks out like a sore thumb with his candy striper outfit and everyone's always looking for him.

You know they're kidding. They have to be kidding, or at least you hope they are. Otherwise, they must have been living in a bubble if they're confusing that creature for a harmless kitty.

Sure, we'll go ahead and get right on that. But you better have the antidote for Malaria and West Nile already to go. Otherwise the mosquito gets it.

Save Time And Space

If you happen to run into a wormhole, keep your distance and leave the real work to the professionals, like the folks on Deep Space Nine, or Matthew McConaughey. He knows how to handle interstellar stuff.

Nothing But The Truth

Some funny missing posters can turn you into a real liar if you take the time to read the fine print. Once you do, there's no going back, and if you try to deny what you saw, you'll be branded a liar for life.

Quick! Someone call Chris Pratt! If this poster's legit, you're going to need a professional to keep this raptor in check until help arrives. Don't handle it yourself if you value your limbs and life.

Don't trust the ending of the third "Lord of the Rings" film. They lied to you. Gollum didn't die in that volcano. He's alive and kicking and clearly happy that he's found his precious. Sorry, Frodo. You lose.

It's For The Birds

They're like rats with wings, which make them 10 times scarier when they're airborne and decide to go No. 2. Anyone up for a game of dodge that poop?

Husband Of The Year

Oh, go ahead and laugh it up, hubby. Wait until you're looking for some nookie on those lonely winter nights. The room won't be the only thing that's going to be chilly.

Please someone put this person out of their misery and just buy them a new puzzle. We're sure the piece he needs is missing somewhere. While you're at it, buy him a life too.

If you find him you can't return him, but you get a cash reward for keeping a kitty that will make your life miserable, but save someone's relationship. So, it sounds like a fair trade. Not!

Lucky's gone missing and it's safe to say that a strange visitor from the destroyed planet Melmac may have been to blame. But hurry before Alf turns Lucky into a cast souffle.

What a player! You finally lost it. But good luck getting a second chance, 'cause once that girl sees this missing poster, you'll be re-virginized by her ongoing rejection and that of every woman for life.

Have you seen it? It looks like a white puffy marshmallow or a large cotton ball floating in the sky. He has a name too, so just shout it out when you see a cloud and he might come.

You knew he was in trouble when his imaginary friend Steve wouldn't even talk to him. But now Steve's gone full on missing because he was denied his right to some ice cream.

Funny lost-and-found posters don't always have to bum you out. Some of them can just serve to remind you how silly pet owners can get when they really love their dogs. Maybe he should marry it.

When the pet owner is so scared of his dog not being on drugs that he'd rather just give it up to animal control. It's got a killer jaw and can fly so we wouldn't want him either. We love our faces too much.

Is It Him You're Looking For

You've been alone with Lionel Richie inside your mind, and in your dreams you've kissed his lips a thousand times. Now it's time to get everyone in the neighborhood to start searching for your true love.

Oh, darn! Whoever the trickster in the neighborhood is, he got us good. But there's no way we'll be dumb enough to admit we looked, except for two people apparently.

A Parrot In Distress

This looks awfully shady. You've got one sign about a lost parrot and a sign about a barbecue on Saturday where parrot seems to be on the menu. Hm... nah! It's probably just a coincidence. Right?