Grandmother Thrilled When Cops Arrest Her on Her 93rd Birthday

Matthew Loffhagen
Grandmother Thrilled When Cops Arrest Her on Her 93rd Birthday September 20, 2018 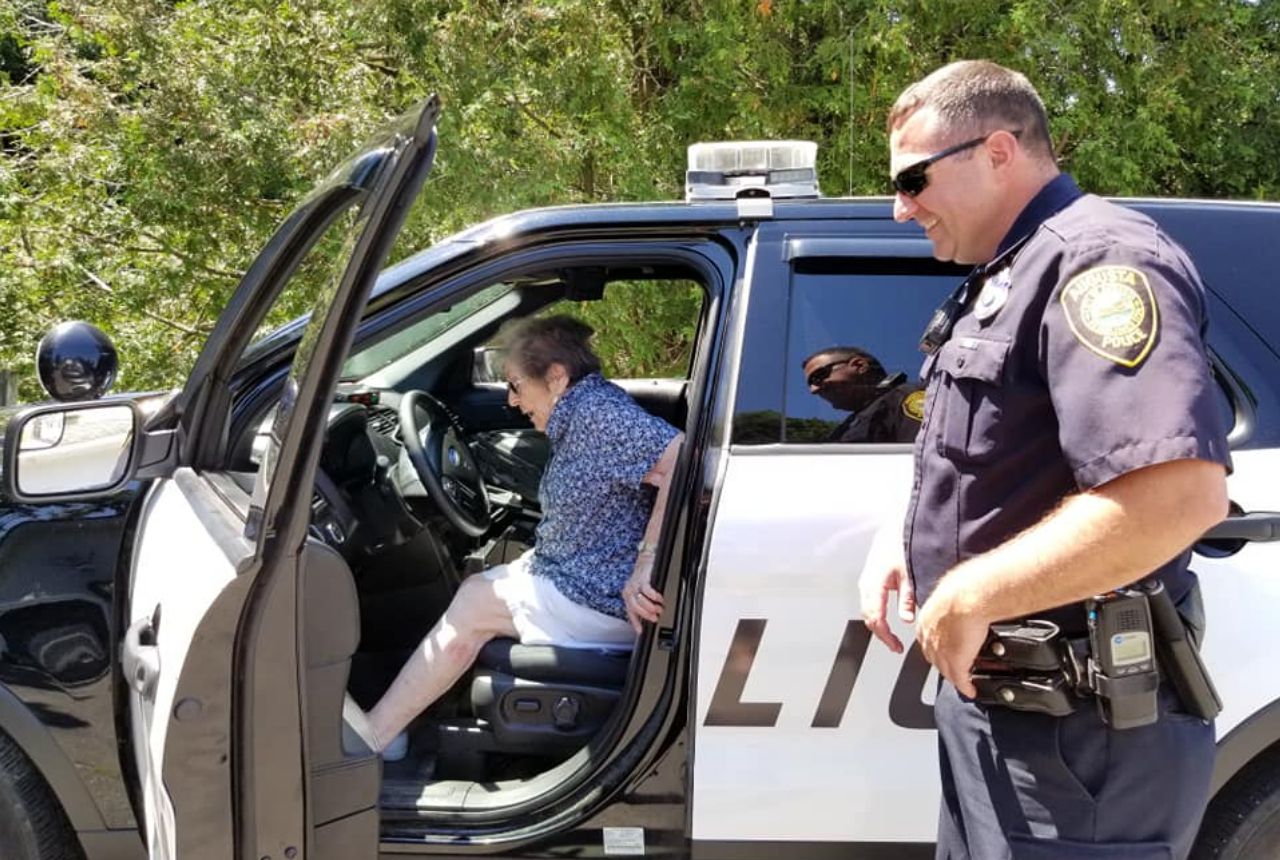 Ever seen't a grandmother arrested by police on her 93rd birthday? You wouldn't think she'd be happy about it. But this grandma was. And here's why...

Anne Dumont’s mother is pretty much everything you could hope for from a grandma. She’s warm, affectionate, and loves spending time with her grandkids. After years of raising her own daughter, she’s now eager to get involved lifting Anne’s parenting burdens as well!

Grandma looks pretty youthful for her age! The stellar grandparent recently turned ninety three years old, even thought she doesn’t look a day over seventy! In spite of her age, Grandma is still very involved in the lives of her family.

In preparation for her mother’s birthday, Dumont thought long and hard about what she could do to make the day special. What do you get someone for the ninety third birthday? Aside from her family, there was only really one thing that Grandma always got excited about.

Grandma is a huge fan of the police. Not the band, but the actual police force! This may seem like a strange obsession for an older lady, but keeping up with the cops makes up a big part of Grandma’s daily routine.

The Ones to Watch

Every night, Grandma watches an episode of “Cops” which is followed by “America’s Most Wanted.” She regularly comments on how the police have the hardest, least respected job in the world. Her admiration for the cops is so great that this became the basis for her birthday celebration.

Grandma’s local precinct, the Augusta Maine Police Department, does a lot of outreach within the local community. This typically means a lot of work with children and young people who might one day aspire to be officers themselves. The response from some of these pint-sized police officers is utterly adorable.

A lot is made of helping the kids to see themselves as cops. This includes a cute cardboard cut-out that children can use to pose for photos. Taking on the role of a mini cop is certainly better than wanting to be a robber, right?

While the precinct’s outreach is mainly aimed at younger children, plenty of adults love to get involved as well. Because the local officers are so easygoing and willing to help, they’ve got a lot of friends throughout town who will also happily pose! All of this led to Grandma’s surprise birthday adventure.

According to Dumont’s Facebook post: “On July 9, 2018 Mom got arrested. Yep, arrested. I told you guys that she was the bad one, but you didnt believe me!! She influenced all of us, but we held strong.”

A Visit From the Cops

As much as Dumont played this up as a serious arrest, the day was actually a special visit for Grandma. A courteous office walked her out to the squad car, where she was able to see some key police paraphernalia up close. This was a dream come true for the old lady!

Get in the Back of the Van!

First, the officer took Grandma into the back of the car, as if she were really getting arrested. For a woman who obsesses over police dramas, it was wonderful to see this up close, and she was very happy about being locked up! But the fun didn’t stop there!

Caught by the Fuzz

According to Dumont’s Facebook post: “She happily got to see the inside of the police car. Front and back and also pushed the siren button until it whaled. A momentous event. A few witnesses on site.”

Having toured the cop car, chatted with a real officer, and even blasting the siren, Grandma was absolutely thrilled. “You made my life,” she told her daughter afterwards. For months afterward, she was still eager to tell everyone about the time she got arrested. Plus, she has a wonderful keepsake to help her remember the day.

In addition to photos of the day, Grandma has something very special: a junior officer badge that’s given to children as part of the department’s outreach program. As a ninety three year old woman, Grandma is probably the oldest person to be considered a “junior” officer, but she’s not the only person to benefit from the kindness of the force.

In truth Augusta Maine’s local police department are always willing to be friendly, welcoming, and kind to anyone in need. They also get to mess around a fair amount, as the photos on their Facebook show. Sometimes they get to hang out with other American heroes like Spider-Man, as well as a few Princesses and other colorful characters…

Always ready to take a photo, the local cops have also posed with Anna and Elsa of “Frozen” fame. Also pictured is Frosty the Snowman, who appears to be filling in for Olaf, for reasons unknown. Presumably Olaf isn’t all that keen on the fuzz – perhaps the white powder in his “snow flurry” is something more illicit?

The Right to Remain Delicious

The Augusta Maine police are also more than willing to stop by and help with local businesses, including kids’ lemonade stand. Judging from this photo, these cops aren’t as cruel as some. Recent reports of kids being fined for trading without a permit are probably why not all police are as beloved as those in Augusta Maine!

Slow days come to all of us at work. It’s nice to see that the cops in Augusta Maine use their time to do something productive, such as giving out free hugs! Yes, a police officer actually wandered around town waving this sign – and not just as a way of frisking criminals!

And of Course, Doughnuts

As we’ve seen with the incredibly gorgeous Samantha Sepulveda, the fat, doughnut-munching cop stereotype isn’t always true. That said, sometimes everyone loves a doughnut, and the Augusta Maine force are in no way opposed to making this information public! Perhaps their regular sugar fix is why they’re so jolly!

Grandma's Run-In With the Law

Grandma continues to love and care for her grandchildren, and will eagerly chat about her cop obsession with anyone who’s willing to listen. Her “arrest” was one of the best things that ever happened to her. Here’s hoping her grandkids will listen to her stories, and be inspired to one day become junior officers themselves!