Just When They Thought Nothing Else Could Go Wrong, Groom Dives into the Ocean During His Wedding Ceremony

Camila Villafane
Just When They Thought Nothing Else Could Go Wrong, Groom Dives into the Ocean During His Wedding Ceremony October 5, 2018 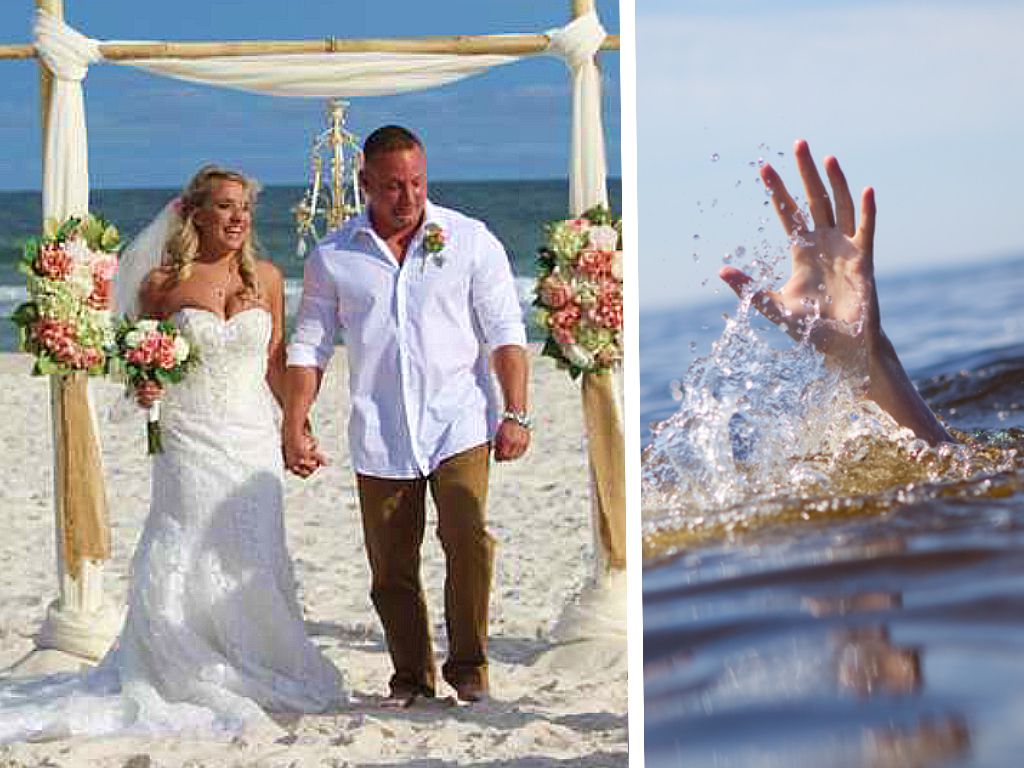 It was Zac and Cindy Edwards's decision to have their wedding at the beach. And they just knew the ceremony would be completely unforgettable. But they never could have realized how much their nuptials would mean to someone else: a complete stranger on the verge of death...

Zac and Cindy Edwards from Alabama decided to have a beach wedding, and like most outdoor weddings, they had to face the possibility of coping with a windy day, rainy weather, and nosy onlookers. But what they wound up dealing with was truly unexpected..

You Have To Laugh

Sometimes you just have to laugh at the little things, like when you try to put the ring on the groom’s finger and it doesn’t fit, or when the wind blows the veil off of a bride’s head. But these minor mishaps shouldn’t bring out your inner Bridezilla.

You can’t control everything, but you do have a choice when it comes to how you’ll react to the way things go, good or bad. Make the best of it, because chances are, that there’s a reason for everything that happens. Just ask the Edwards.

He Had A Plan, Fate Had a Different One

“God had a plan, and everything fell into place,” Edwards told People magazine. And it was a good thing that he believed that. Otherwise, a certain bystander at the wedding wouldn’t have lived to tell the tale.

The Edwards had finally said their “I do’s” and were busy posing for their wedding photos on August 2, 2018 at Orange Beach, Alabama. Then a woman drew their attention to 18-year-old Jamel Robinson, who was struggling in the water.

Edwards could tell that Robinson was terrified despite the fact that he was way out there in the water. Being the awesome wife that she was, Cindy looked at her husband and said, “Go get him.” And that’s how her groom saved a man’s life.

Coast Guard To The Rescue

Edwards was a muscular marine science technician working for the Coast Guard. So, he took off his shirt and dove right into the water. But that’s when he came across two other teenagers who were trying to be heroes.

“I didn’t want it to turn into a multiple person rescue,” Edwards told People. But he did borrow one of the teenagers’ boogie boards and then told them to head to shore.

He Needed Someone To Save Him, Fast

By the time Edwards reached Robinson, the boy was shouting, “I can’t breathe, I can’t breathe!” Desperation was kicking in, which could really complicate the situation.

Edwards grabbed Robinson by the wrist and helped him get on the boogie board. Then he began to swim to shore, but halfway there, the currents grew stronger. Even Edwards’ physical prowess couldn’t break them free.

A Race for Time

Edwards and Robinson hung on until the Orange Beach Fire Department and Orange Beach Surf Rescue arrived and used a jet ski to rescue both of them from the water. But Edwards was more concerned for his wife.

“My wife was running out into the water as I was getting out, and I got a nosebleed from bouncing on the sled,” Edwards told People. But as soon as he saw Cindy, he told her to get away from him because he didn’t want to ruin her dress.

It Could Have Been Worse

It didn’t dawn on him that he had actually saved a life until he was in bed with his wife. Things could have turned out a lot differently for everyone, especially if the couple hadn’t gotten married when they did, particularly when someone suggested something different.

Their pastor had recommended that they get married a day later. If they’d listen to him, then Edwards wouldn’t have been able to keep Robinson afloat until the rescue team arrived.

Despite the strong currents, Edwards didn’t let go, and he doesn’t regret that one bit. “I wasn’t going to let him drown on my wedding day in front of my wife and kids while I’m able to do something.” But he also had to look after someone else.

Aside from saving Robinson, Edwards was determined to stay alive for his six children, three of which he had with Cindy. Making it back to his family was a top priority, and he was grateful for the way things turned out.

Meanwhile, Robinson had managed to recover and was back home, safe and sound. And in a video message sent through Good Morning America, Robinson thanked Edwards for his bravery.

Edwards talked about the weeks that followed since his wedding, and the heroic rescue. He says he's been surrounded by love, and he feels lucky that everything went well, and that everyone was able to make it out alive that day.

They Got Quite A Story

This man's selfless act saved someone's life that day, so you can imagine how proud their kids must be of him! Now the lovely couple have one amazing wedding story to share with their grandchildren in the future.

A Hitch In The Plans

Most brides will micro-manage everything about their special day so that their dream wedding will go exactly as they pictured it. But there’s no way you can prevent something from going wrong.

You might not be able to control everything, but you should still plan everything to the letter, so that you have a decent wedding. Remember, the tiniest details can make or break your wedding!

Say "Thank you" to vendors, wedding planners, and most importantly, your friends, family, and of course, your significant other. This will make everyone around you glad that they’re at the wedding.

You may not have a lifetime to plan the perfect wedding, but you should take as much time as possible to schedule your hair and makeup session, the bridal shower, and the engagement photos. But pay special attention to your family.

Family members are ticking time bombs. So, defuse any problems before they detonate. Don’t put your sister next to that cousin who stole her boyfriend in high school. Keep your divorced parents apart, but make sure everyone feels included, because being positive is key. Still, there's no way to prepare for the unexpected.

Have The Right Attitude

The wrong attitude can derail a wedding, especially when the unforeseen happens. After all, life can throw a wrench in a wedding in the blink of an eye. Especially if you decide to have an outdoor wedding. Then it's practically impossible to control an animal crashing your wedding or worse, someone having an accident.