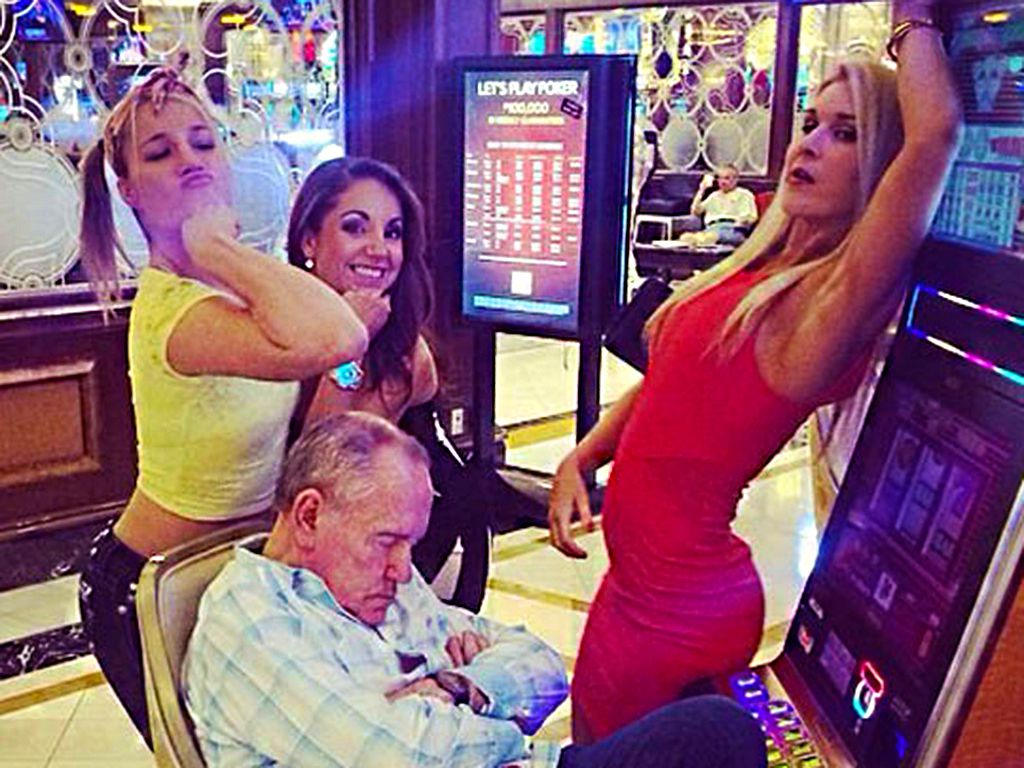 Las Vegas is a beautiful and terrifying place; a den of sin and a celebration of all that's weird and wonderful about humanity. And sometimes, the unique moments that are supposed to "stay in Vegas" get caught on camera for us all to enjoy!

Because Las Vegas is a huge tourist trap, many people don't treat it like home, but instead like a place with no consequences. Here are some photos that prove that Vegas may not be the cleanest place on Earth, but it's certainly the most memorable (depending on how much you've had to drink).

It looks like the Mario Brothers have been partying a little too hard on the Strip. Sorry boys, your princess is in another casino.

Nothing if not Polite

It's not unusual for Las Vegas patrons to hit you up for cash as you're wandering around downtown, but this sign ("Best friend stole wife... Need $ for a thank you card!") certainly takes an interesting approach to panhandling.

Don't pretend to be surprised that "The Hangover" costumes remain popular across Vegas. It's not that unexpected.

If only Bigfoot enthusiasts had thought to try looking at the poker tables— they'd have saved themselves a lot of time and hassle.

Parent of the Year

This attentive father is giving his baby a tour of the slots. From the looks of it, the kid is having a fantastic time. Well done, dad.

Welcome to Vegas, baby! This taxi sign makes it clear that laughing, singing, running, jumping and all manner of other acts are permitted. Just don't think too hard about any gooey patches in the upholstery.

Garfield's life took a real turn after John kicked him out. The world's laziest cat can be seen regularly on the strip, having hit rock bottom. Don't let the vodka fool you— he's only jonesing for a lasagna.

You're going to see some unusual fashion choices in Vegas, but this beautiful bachelorette is a sight to behold. Not everyone could pull off quite such a low-cut dress.

Spare cash can be hard to come by in Las Vegas, so these two enterprising men have set up a small business. For just $20, you can kick them in the nuts. Certainly an appealing prospect!

Life can be harsh when you're a cartoon mouse. Nobody knows where Mickey went, but clearly Minnie is taking his departure to heart.

It's hard to tell what's going on with this costume. Is this woman dressed as an alien? Or some kind of milk monster? Or both? Whatever it is, it's certainly a look that says "all eyes on me!"

Don't listen to Lee's Discount Liquor. Alcohol may be cheaper than therapy, but if there's any place on Earth that is desperately in need of a good shrink, it's Vegas.

Bear in mind that this sign, promising "$2 BJ," is probably referring to Blackjack. Even if it is the other thing, just remember that you get what you pay for.

In Vegas, it is absolutely not unusual to discover drunk casino patrons passed out on the floor, especially in an airport. These sleepy travelers clearly didn't plan ahead, like some people...

Here's a gambler who's thought things through! Why pay for an expensive hotel suite when you can simply bring a mattress with you to the slot machines? This way, he doesn't have to miss a single second of Vegas fun.

This poor woman. Imagine having to be seen in public with a man who's wearing a balloon stripper on his head. At least this isn't the weirdest sight on display on the Strip.

"Liquor in the Front, Poker in the Rear." This sign might be descriptive, but it's hard to shake the feeling that it has some kind of second meaning...

In a busy place like Vegas, it's important to make sure you don't lose your friends. The solution is to dress in the most garish suits as possible, so you can be seen across a crowded room. Totally unrelated fact: British tourists are often voted the worst in the world.

The King Has Left the Building

Elvis might not be dead, but he does need some help getting around from time to time. There'll always be a place for him in Vegas.

This urinal advertising is absolutely amazing. Nobody knows what it's meant to be selling, but if there's ever a time a man needs to be reminded of his true stature, it's when he's in Vegas.

Surprise surprise: Zach Galifianakis impersonators can get a lot of attention in Vegas.

Getting married in Vegas is nothing new, but this bride has at least gone to the trouble of getting a proper dress. It's a surprise, then, that she's at the slots rather than spending time with her new spouse. The allure of the casino is just that strong.

Not Everything Stays in Vegas

It's worth bearing in mind that Vegas is not entirely consequence-free. This billboard advertising STD checks wants to remind you of just how things can go wrong. That's not all you might leave Vegas with...

"I'm What Happened in Vegas"

This picture is amazing. It's not just that the baby is wearing a bib which reads "I'm what happened in Vegas," it's also his incredible expression. This kid has only been alive a short time, but he's already seen some things.

Vegas clubs are always on the look out for fresh talent, but a Now Hiring sign listing school classes feels particularly gross. A disturbing reminder that for many Vegas will take your money or your youth, and it'll start with whichever is easiest to steal.

Either this woman's dress is just a little on the short side, or she forgot something when getting dressed. Either way, this is a sight you'll only ever see in Vegas.