25 of the Most Hilarious Quarantine Beauty Fails

What's That
25 of the Most Hilarious Quarantine Beauty Fails September 17, 2020 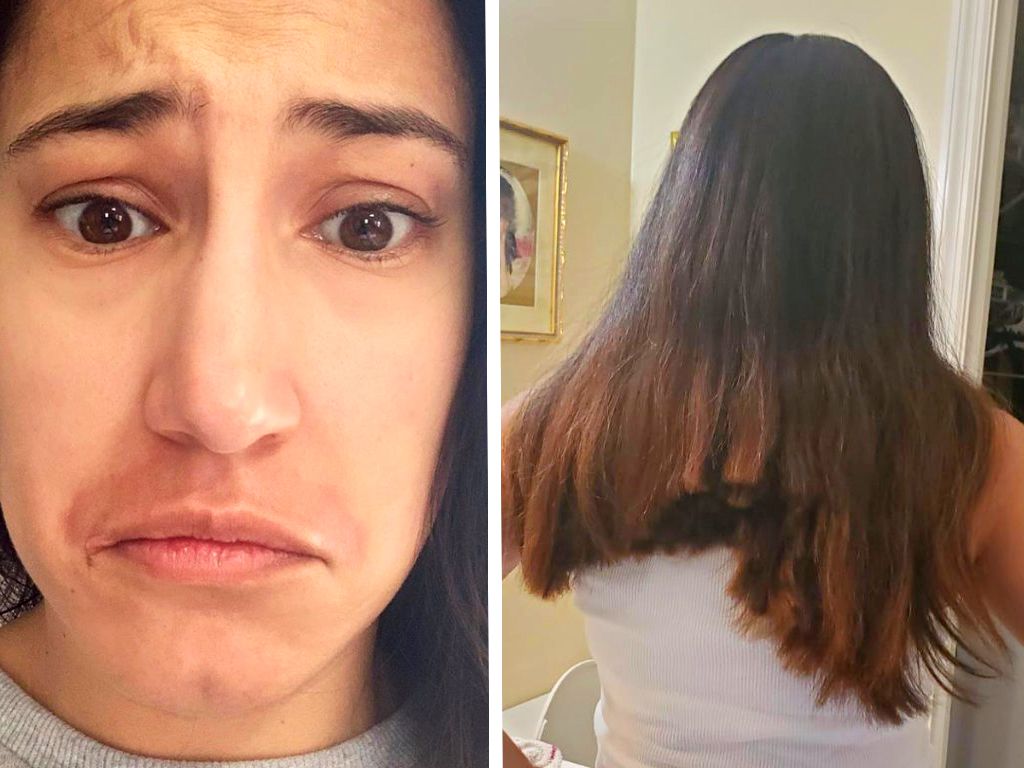 Most people's lives have changed drastically over the past few months with global lockdowns causing disorder, unrest and of course, boredom. With the sudden influx of free time on most people's hands and a lack of accessible haircuts, some people have succumb to taking the clippers into their own hands!

Not only have people been going without haircuts, as we've seen from many, many celebrities' quarantine beards, but many women have gone without pedicures, manicures and root touch-ups for months. This has lead to some absolutely hilarious makeshift DIY beauty fails.

Even before she had been in quarantine for a week, this woman failed hard on her manicure, writing, “quarantine day 4: got extremely drunk and did my own acrylics last night, woke up with the longest nails I’ve ever had.”

Twitter user Chloe wrote, “I’ve been indoors for a couple months now and I’m now dying my hair for the second time (and yes it’s 1am and I’m home alone and covered in hair dye right now).” Hopefully things will have reopened by the time it takes to get that purple dye off her hands.

This Reddit user had a major hair fail, saying, “Having my first buzz cut with the boys at 11pm without checking how much battery the razor has left.” Another user replied to this saying, “Now you know what you’ll look like in 40 years…”

It's a good thing that schools around the country were closed for the rest of the school year to save kids who have gotten some unfortunate home haircuts some embarrassment. And the summer will give them plenty of time to grow their hair back, as long as they don't have to take part in any virtual classes!

Did I Miss a Spot?

It's hard enough to give someone else a haircut at home, but giving yourself a trim is downright impossible, especially if you've got a cropped cut like this guy. It will probably look normal when it grows back in, but that might take quite a while.

A Modern Approach to the Fade

Fade hairstyles look easy enough to do when you see them, but anyone who has picked up the trimmers and given it a try may have found out quickly that is not the case. This striped style looks atrocious from the back, hopefully it looks more palatable from the front.

If you're cutting your own hair it might be exhilarating to take that first snip and immediately love how it looks. But that makes the disappointment all the more crushing when you take a look at the final haircut and find out that there's a reason that you don't do this professionally.

Party on Top, Business in the Back

Many married couples have now become their spouse's hairdresser and this guy should just be lucky that he looks this good after his first quarantine cut! Every grown man on a Zoom call now has the haircut of a first grade child, which at least adds some humor to the ongoing situation.

There's a plethora of home grooming techniques to fail at, including the most painful of them all: waxing. There are many techniques to master to make sure that you don't have a vicious red irritation mustache when the waxing is through, but that takes years of practice.

When you ask your unqualified quarantine-mate to give you a fade, you better think twice. This one is more of a chunk and slash job resulting in something that looks like your first Barbie haircut that you can't undo.

Itching For a Way Out

She wanted a nice, simple acrylic set to go with her pretty opal ring... what she got was a bit different. Nail shapes are open to some creativity but this is scary. If you scratch yourself with these, you may get hurt, Freddy Kruger-style.

Seems like this could have been avoided with a mirror and some forethought but Mr. Chris Crater wanted to forge ahead blindly. This is what you get when you mix an electric shaver and alcohol... a nice hair hole. It'll take a while to even out, but until then... hats.

I Want to Dye

Now is a great time to dye your hair because you won’t have any reason to leave the house if it goes horribly wrong. This woman wrote, “I tried dying my hair by myself. It was a comedy of errors, to say the least. It’s supposed to be purple.”

Those Hard to Reach Areas

Is it me or did this guy shave an alien monster into the back of his head, with eyes, a mouth and little legs or pincers. Unless it's supposed to be a hair Rorschach test! Look into the tuft and tell me what you see...

How Bad Could I Possibly Do?

This man’s wife posted, “Hubby needed a trim and we figured, why not? How bad a job could I possibly do?” It turns out, she could do a very bad job indeed. Even his sunburn is backing away from the haircut out of fear!

Sometimes the best thing to do with your nails is nothing at all. Unless you already have a manicure and you haven't removed it yet. Then your fingers will start to look a little strange. Luckily, all this look needs is some nail polish remover to clean it up.

Patchy With a Chance of Scalp

Today's forecast calls for patchy hair with a slight chance of scalp showing through. Golden sunshine will reflect off scattered bald spots and you can definitely expect some drizzle later on in the day after you figure out what you actually look like and begin to cry.

This time could also be called the pandemic of bowl cuts. So, let's just settle this here and now. No one, not anyone, looks good with a bowl cut, okay? This one is actually done pretty well in the scope of the entire bowl cut universe, but please stop the insanity.

Someone really put some work into this stinker of a haircut: the feathering, the texturizing and the fade-like shave job but... hark! The back of his head looks like Kermit the frog's collar, or a monster mouth... or a cave of stalactites.

Girlfriends Are Not Live-In Stylists

If you don't already know how to use hair clippers, just know that they're not that intuitive. This guy would have been better off going for a complete buzzcut, but at least his girlfriend is to blame for the mistake! So, she will be the only one who has to look at it.

Nothing says slapdash like a slash and burn buzz cut from a drunk friend. Lured into a false sense of calm by the outdoor setting, he should have taken a look at the awful state of his buddy's grass to the left for a preview of his "mowing" skills.

This major fail is even funnier up close. This man’s girlfriend posted the picture of only this portion of his head, writing, “Ok, he decided to give himself a haircut. The bald spots you see in the picture are chunks of hair he somehow cut out. The front view is too traumatic to share in these difficult times.”

This cut is super goofy. It looks liken someone was wishing upon a star for a good stylist, but got the sorcerer's apprentice instead of the hair wizard. Now entering the Adventureland of haircuts... this one could really be described as Mickey Mouse.

This person wrote, “Quarantine has me doing my own acrylic nails since all nail salons are closed.” Maybe this is the best time to let your natural hair and nails grow out again. No one is really going to see them anyways!