Hilarious Southern Inventions That Will Make You Rethink Life Hacks 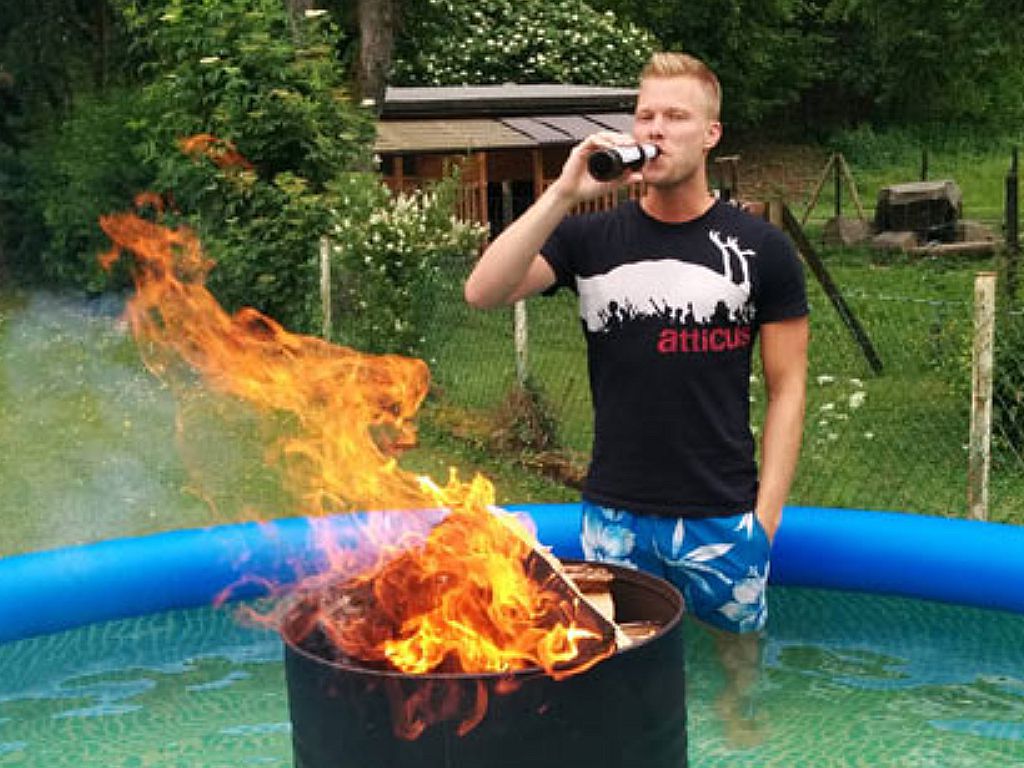 Where would we be without life hacks? If you haven’t found a solution to a problem, chances are someone else has. There are tons of life hacks floating around online, but these out-of-the-ordinary and completely hilarious southern inventions will have you giggling as you rethink your entire routine.

Finding a cute swimsuit that doesn't cost an arm and a leg can be a total nightmare, but these southern gals found a great alternative! They turned cardboard beer boxes into swimsuits, which probably made them extra popular with the boys. But this next invention is a real time saver...

Instead of buying a new clock, someone simply drew the piece of the clock that was broken and taped it on the wall. Even though this hack won’t end up in Architectural Digest, it probably saved the owner a few bucks. And this next guy could have used the extra cash to avoid testing this next dangerous hack.

These swimmers turned a regular swimming pool into a hot tub by linking the filter pump to a fire in a trash bin. This sent the hot water back into the pool, thus creating a makeshift hot tub. But if there’s ever a fire inside the house, this next invention might save your life.

Who needs an actual fire alarm when you’ve got some Jiffy Pop popcorn? This homeowner decided to hang Jiffy Pop from the wall so, if there’s a fire, the kernels would pop and alert the whole house! But if you ever find yourself without a shower head, this next hack can work wonders.

This person’s shower head was shot to heck. So, the homeowner poked a few holes in a beer can and attached it to the shower nozzle with some duct tape and a string. Now, the following life hack might be a tad controversial but it kind of works. So, if it ain't broke, why fix it?

The south can get pretty hot in the summer, but those of you who don’t have a pool can still make one. Just line the trunk of a truck with plastic and fill it up with water and enjoy. Now, the next nifty solution is perfect for everyone who doesn't have money for an expensive baby carriage.

When this baby needed a baby chair and teething ring, his parents decided to cut a large watermelon in half, hollow it out, and add two holes to the bottom so their baby could stick their feet in. And voila, they had a baby chair with a makeshift teething ring. You can't argue with how brilliant this idea is. But have you ever seen a flip-flop used for violence?

This guy tied a second belt around his waist to keep a sandal in place by his side. Then he slid a gun where you'd normally put your toes through. It might be tacky, but it kinda does the job, doesn't it? He's definitely giving Walker Texas Ranger a run for his money. But this next invention is too cool for its own good.

Most people sit at a picnic table to each lunch, but these two folks set up a picnic above water after undoubtedly making a few modifications that helped their table to float. But if you’re a land lover and in need of lawn mowing, this next invention is for you.

This bicycle was turned into a mower cycle after it had its front wheel replaced with a lawn mower. Clever, right? Now this kid can get his exercise and earn his allowance at the same time. But the seat situation is a bit alarming, though not as much as this next makeshift hot dog grill.

This guy made a hot dog grill by cutting a can of Mike’s Hard Lemonade in half. Then he installed a tiny grill inside, placed a hot dog on the grill and lit the fire. And now he’s a total legend with his friends and family! But this next guy went up the creek with his paddle invention.

There’s no way this guy was going to go up the creek without a paddle! Luckily, he had a pitchfork and an old license plate laying around in his yard. So, he rammed the fork into the plate and turned it into a paddle. But if you thought this was bad, then wait until you see what this other guy used as a gear shift.

If you ever wanted to shift gears and wash your car’s interior at the same time, then try this. Alright, so the hose nozzle won’t spray any actual water, but it makes for one incredible makeshift gear shift. But, this next hack can feed your whole family and all of your friends.

Why roast one hot dog at a time when you can roast over a dozen at the same time? This person attached hot dogs to the tips of their rake and came up with an incredibly tacky hack. But we can't help but admire their creativity. But this hack doesn’t just work for hot dogs...

You can also do what this guy did and flip the rake over. Then, you can roast marshmallows while you warm up the Graham Crackers and the chocolate pieces. But if things get too hot, then slip and slide into this next invention.

Who needs Six Flags when you can put a tarp over your roof? These people used water from a hose to make it easier for everyone to slip and slide their way into the pool below. And this next hack will shield your eyes from the sun.

This granny needed a sun visor to protect her fragile eyes, so she cut a half circle on the side of this cardboard food tray and turned it into an ugly, but pretty clever visor. This next hack will be extra helpful if your door bell’s jacked up...

These folks didn’t have a functioning doorbell, so instead they added a couple of rocks to an empty bottle and posted this sign. So now to get someone’s attention, they have to shake the bottle. Classy! But if you ever need a docking station, this next invention should do the trick.

This clever DIYer used two paper cups with holes on the sides. This allowed them to stick an empty toilet paper roll with a slit in the middle. Then they stuck their iPod or phone in the middle and listened to music and watched videos. But this other hack is perfect if your car's stereo is on the fritz.

Want to listen to music on the way to work but don’t have a built-in car stereo? Then tape a regular stereo to your dashboard so you can listen to the radio or play your favorite CD and voila! But if your desk drawer handle ever breaks, then try this next invention.

If your desk drawer’s handle ever snaps off, get crafty by linking paper clips into a chain. Then attach them to the hole in the drawers where the old handle used to be and just pull to open. Hey, you might get eye strain just from looking at it, but it's an effective solution. Now, if you don’t have a fish tank on your desk, then try this next proven hack.

If there’s one thing fish know how to do it's drink. Instead of throwing those old whiskey bottles away, someone turned one into a mini aquarium complete with rocks, fake vegetation and a goldfish! Let's just hope that they thoroughly washed that bottle.

Need a birdfeeder? Find a square piece of wood and drill a hole in the middle. Then grab an old plunger and stick the handle in the hole. Then add some seeds into the cup. But make sure the plunger’s actually clean first! We're sure the birds will really appreciate it. And if you ever need to keep things organized, then try this next hack...

Who needs an actual pill container when they’ve got this crazy hack? They wrapped a toothpaste box, five pill bottles, and another box with tape, and then wrote the days of the week on the tape. This is borderline genius. And it’s craftier than propping up your bathroom sink with a chair...

Place a chair in front of the sink and add a couple of books on the edge of the seat. The books will act like a tower between the chair and the bottom of the sink that will keep your sink from crashing to the floor! It's clever, sure, but it's as unstable as a chair with two legs.